Max Hardberger has written several books inspired by his time at sea, first as a marine captain, and later as a well-known recovery expert, "stealing back" ships and other big-capital items that had been stolen from their owners.  In his book "Freighter Captain" (officially a novel, but which is obviously and unashamedly highly autobiographical), he describes several months in command of an old, ramshackle tramp steamer trading between the USA and Haiti. 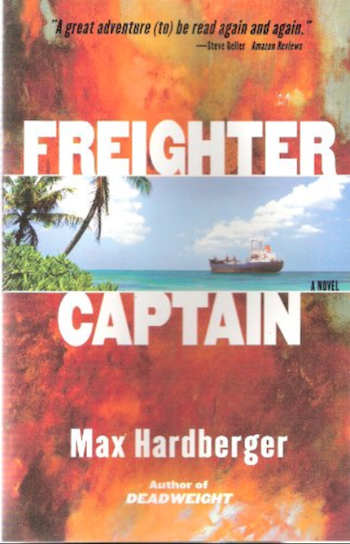 Theft was a perennial problem in Haiti, with light-fingered visitors coming aboard in the dead of night from canoes or small boats, and stealing anything that wasn't nailed down.  Something clearly had to be done about it.

It was one of those pawn shops that specialize in police supplies. The proprietor was a big, bearded man with an automatic in a quick-draw holster. I bought three pairs of Smith & Wesson handcuffs at $28 each. I also picked up two jumbo cans of pepper spray.
As I was going out I noticed a rack of Wrist Rocket slingshots on the wall by the door. I picked one up. “Ah, hah,” I said. “I know what I need this for.” I stretched the rubbers a couple of times, then put it on the counter. The man tried to sell me a pack of steel balls as well, but I said, “I’m on a ship. I got all the ball bearings I need.”

The next morning, before I went on watch, I looked around in the engine room until I found a drawer of old bearings. A good chief engineer never throws away a bearing, no matter how badly worn, because someday it might be better than a frozen one. I chose half-a-dozen of the worst, broke the races with a ball-peen hammer, and gathered up the steel balls. They were about half-an-inch in diameter and perfect for my purpose. During the long morning, between satnav and radar fixes, I practiced with my new Wrist Rocket slingshot using a plastic jug on the hatch cover as a target, but without much success.

I went down to the engine room and cracked some more bearings before climbing to my perch in the darkening wheelhouse. I ranged my ammunition on the dashboard and put the Wrist-Rocket slingshot close to hand on the autopilot console. Things had settled down on shore, with only a few cooking fires still burning. The electricity was off again. The streets were dark, with candles flickering in the windows.
The ship rocked quietly. The moon rose huge and lopsided into a lattice of high clouds. The party on the Gitan Express died a natural death, and the only noise left was the thumping of generators.

I lowered the pilot ladder on the starboard side, to make it easier for anyone wanting to come onboard. About 0300 hours my first customer arrived, a dreadlocked figure gliding across the bow of the ship in his canoe. I got a couple of ball bearings from the dashboard and went out on the wing of the starboard bridge, behind the deck lights. I didn’t have long to wait. The pilot-ladder ropes started shaking. I put a ball in the leather pouch and positioned myself.
His head eased up over the bulwark, dreadlocks first. He studied the front of the house carefully, then slid over the gunwale and took up a low crouch on deck. He moved silently aft. I leaned over to keep him in view as he approached the front of the house. I let him get to the rear corner of the hatch, about twenty feet below me, before I drew the tubing back and let the ball fly.
My aim wasn’t good. The ball pinged against the deck and landed in the water with a splash. He spun around. I took aim again and the next ball got him behind the ear. It whacked against his skull like a lug nut hitting an oak tree. The would-be thief dropped to the deck without a twitch and sprawled against the hatch coaming with his head in darkness.
I ran downstairs. No one was awake. I could hear snores through the cracks in the doors. I went on the dew-covered deck. The Haitian was still motionless, one arm across his chest and the other flung wide.
I picked up a piece of broken dunnage and held it ready as I bent close to him. He was breathing slowly and regularly. I looked at his face. He had a large boil in the middle of his forehead that made him look like he was about to sprout a horn.
I went back and knocked softly on Yussuf’s door. “Yes?” I heard him call sleepily.
“It’s the captain. I need some help. Keep it quiet.”
He opened the door in his underwear.
“I just knocked a thief out with my slingshot. I need help getting him into his canoe.”
His eyes opened wide. He closed the door to drop the hook and came out. He stared at the thief, still motionless.
“He looks dead, Captain. You sure you didn’t kill him?”
“He’s breathing. That’s all that counts. Let’s get him into his canoe and shove him off.”
“That where you hit him?” he asked, pointing to the man’s forehead.
“Naw, that’s some kind of sore or something. I got him behind the ear.”
The man snorted loudly, once, and turned on his side. Yussuf stood up. “He’s okay. But what if we put him in the boat and he rolls out of it? He might drown.”
I gave a sharp grin. “He shouldn’t go boating at night. Dangerous creatures about.”
“Let me go get the AB’s.”
I shook my head. “Let’s do it ourselves. The fewer who know about this the better.”
We made a bight in a one-inch rope—a smaller rope would have cut into his skin—and looped it under his arms. We handed him over the gunwale and lowered him to his boat. When his feet were a few inches above it, we made the bitter end fast and I went down. Yussuf lowered him into the boat as I guided his feet. I unfastened the rope and pulled it out from under him. He never regained consciousness, but he did call out once in Creole, a small, lost cry that disappeared into the darkness as soon as it was uttered.
I stood on the bottom rung of the ladder and untied the boat. The bow wheeled away. When I got up on deck it was already at the edge of visibility, and a few minutes later it was gone toward the western reaches of Miragoane Bay.
I chuckled. “I bet he has a hard time figuring out how he got there when he wakes up.”


That excerpt rings very true to me, having enjoyed (NOT!) the hospitality of all too many Third World ports of call.  The rampant theft, incompetence, nepotism and filth of such places is beyond my ability to describe it.  Suffice it to say that "frontier justice" such as that described above is all too common.  If the owners of the goods concerned want to keep them, they have no choice, as the police are worse than useless;  but if the thieves don't bring back what they need to survive, they'll starve (or their gang bosses will torture and kill them as an encouragement to the other members).

It's a dog-eat-dog world out there, one that most of us, in our First World civilization "cocoon", don't know at all.  For that, be thankful.

OH so true, in ANY seaport anywhere in the world... The sneaks even try to come aboard US Navy ships and submarines...

I've gotten to write and speak with Max and his friend/publicist on a few occasions. I was one of the reviewers for his last book 'Seized' and he was good enough to track down a copy of his book 'Deadweight' which has been out of print for like 15 years for me. I had originally wanted to work for his company Vessex as a bosun/repo man, but realized I lack enough Batshit Crazy in my CV. The guy's works are all worth reading, and the TV special on him is worth watching. Genuinely good guy.

A wrist rocket with steel balls (or .45 lead round balls) is actually one hell of a potent short range weapon. Added benefit of being silent.

He is very lucky he didn't kill the idiot Haitian. As a kid I had a wrist rocket. My main ammo was cheap glass marbles and #29 split lead fishing weights (maybe 20 g?). One hit with the lead would kill most varmints (squirrel, blue jays stealing our blueberries). The marbles were used to chase off things (mostly some local "stray" dogs that harassed and killed a couple of our barn cats). Steel bearings square on with fresh tubing at full draw from 20 yards would EASILY penetrate a 55 gallon steel drum. His shot must have been a glancing one or the bands old because I'm pretty sure a clean shot to a human skull with a ball bearing would be lethal except at long (50YD +) range. And good luck hitting anything at that kind of range