Saturday Snippet: The USS Enterprise and the Japanese attack on Pearl Harbor


As we all know, the US aircraft carriers weren't at Pearl Harbor when the Japanese attacked it on December 7th, 1941.  However, they weren't far away.  USS Enterprise was one of only three US carriers (along with USS Saratoga and USS Ranger) to serve throughout World War II from the first day to the last.  As the Japanese attack went in, she was returning to Pearl Harbor after delivering fighter aircraft to Wake Island, soon to be occupied by Japan.

Cdr. Edward P. Stafford wrote a history of the ship, "The Big E".  Published in 1962, it's become one of the classic accounts of naval warfare.  I'm particularly pleased that the Enterprise car rental company, founded by a veteran who served aboard USS Enterprise during World War II and named his company for the ship, sponsored a brand-new pictorial edition of the book through the Naval Institute Press a few years ago, gathering together almost every photograph of her ever taken, to go with Cdr. Stafford's text. 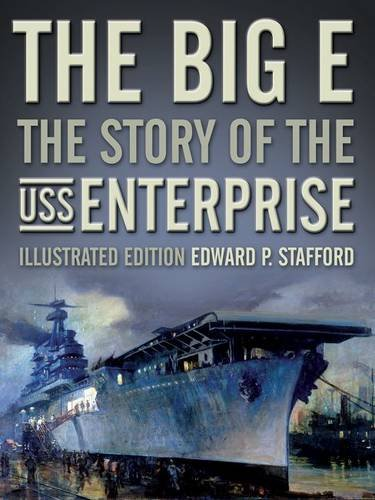 It's a magnificent volume, albeit rather expensive in hardcover.  I'm glad I invested in a copy - the pictures make it worth its price.  Cheaper editions are also available, although without the copious illustrations.  IMHO, it should be on every military and naval enthusiast's bookshelf.

From Cdr. Stafford's book, here's some of what USS Enterprise and her air group experienced on December 7th, 1941, and the following evening.

AIR RAID PEARL HARBOR THIS IS NO DRILL

Halsey kept no secrets from the men of Enterprise that day.  The word was passed over the public address system.  Hardly anyone believed it.  The habit of peace was hard to break.
But in the code room they intercepted a message ordering all medical officers in the Pearl area to rush all available anesthetics to the Naval Hospital.  Realization began to come.
The admiral appeared on his bridge.  His was not a drill face.
Snap hooks clicked in the hands of the signalmen and their multicolored flags soared to the yardarms.  The message:

The flags stayed up much longer than usual.  When at last they plumped like well-shot birds to the deck of the signal bridge, simultaneously from foremast and mainmast of each two-masted ship in the force, the stars and stripes broke clear and bright into the morning sun.  The challenge was accepted.  It seemed that the ships surged forward under the defiant battle colors.

The sun had just set [on the eighth of December] as the Big E nosed into the channel.  No one could remember when a carrier had attempted that channel after sunset.  From her bow, black oil from the tanks of broken ships turned back on itself and oozed away.  Flight deck and catwalks, bridge, fo'c'sle and fantail were crowded with men, and every port and hatch was jammed with faces.  On both sides the shore was lined with hastily erected, fully manned antiaircraft guns of all sizes and calibers.  A soldier at Hickam yelled across the water.
"You'd better get the hell out of here or the Japs will nail you too."
They passed the battleship Nevada, heavily aground to port on Hospital Point, the only ship to get away from Battleship Row that awful morning.  Coming around Ford Island, the carrier had to swing wide to avoid the old battleship Utah, ripped to pieces and lying on the mud of the harbor bottom.  For years she had been used as a target ship.  But she had been moored in the carrier Saratoga's usual berth and her heavily timbered topsides slightly resembled a flight deck from the air.
The place smelled bad.  Instead of the lush, flowery smell of tropical forests which usually came down off the hills on the land breeze, there was the sick-sweet odor of fuel oil, seared flesh and the charred wood and fabric smell of a half-burned house after the fire.  Black smoke was layered in the sky from the still-burning Arizona.
The feeling aboard Enterprise was anger and unease.  The crew began to feel the treachery of the Sunday morning murders.  Subconsciously they compared the harbor they had left on November 28, proud and shipshape, with the oil-soaked mess before them.  On the bridge, the admiral was heard to mutter, "Before we're through with 'em, the Japanese language will be spoken only in hell!"


The Enterprise refueled and loaded fresh supplies in about half the usual time that night, with every man in her crew working harder and faster than they'd ever done before.  By three the following morning, she was on her way back out to sea, to start her long war with the Empire of Japan.

That was an awesome post. The sneak attack at Pearl Harbor before war was declared enraged the Americans, violated their sense of "fair play". That is why the war in the Pacific was fought with no quarters. The only place was it worse was the Eastern Front and I am not sure if the Pacific War was more savage. See the Movie Midway if you haven't seen it already, and take Old NFO with you if he hasn't gone.

I read the original edition some years ago. Two other things stuck with me from that chapter: Halsey was ready to fight a meeting engagement, if he encountered a Japanese task force; and the heavy winds and seas which delayed her arrival in Pearl were either fortuitous or Providential.

I must have read that book at least ten times when I was in high school. Living near Great Lakes, some of us breathed NAVY. Fabulous post and I'm ordering myself a new copy

While the sneak attack on Pearl certainly angered all Americans, the effective rules of engagement that dictated no quarter came about as the American soldiers, in particular our Marines, learned of the systemic abuse of the rules of war commonly agreed to by most civilized nations.
By all accounts the abuse and violation inflicted on both captured soldiers and civilians by the Japanese military, along with the common tactic of Japanese soldiers to surrender then set off explosives when captured, caused our men to be very reluctant to offer much in the way of trust or consideration to the enemy.

This what truly 'woke up' America. And they paid the Japanese back in spades....

Then there was the flight of B-17s from California that chose to arrive during the attack. Unlike the Navy planes, these bombers were unarmed and rigged for ferrying.

Thanks for reminding me about the carrier aircraft from the Enterprise.

A sad day. I won't ever forget. Unfortunately, kids these days aren't taught much about it.

A great post Peter. What occurred 78 years ago was a horrible tragedy. From what I have heard, many Japanese senior military officers were wary of attacking Pear Harbor; but their loyalties overrode their caution.

As to Beans comment on the recent generations knowledge of history, they are being taught only the "bad" things that we as a country have done. For them WW II is only about things like the internment of the Japanese, the segregation of units, and other such things. They are told about the horrors of the dropping of atom bombs without the accompanying issues of what the human toll of an invasion of the Japanese Islands would have cost. Nor do they learn of the atrocities committed by the Japanese. War is ugly but we are not the bogeyman overall.

Thanks for a great post, Peter; perhaps some of that gratitude should be towards CDR Stafford, and (your fine choice of) the excerpt. That was a time when the unwise mores of an earlier age (resulting in acts such as the internment of the Japanese) had not yet fallen off, although then "men were men", and it shows in the writings of, about, that time.

Lost in the clutter is the fact of how close things got in 1942.

Midway was a turning point in that Japan lost 4 front line carriers to our one. However, during the Guadalcanal campaign, we lost three front line carriers. (Wasp and Hornet were sunk and Enterprise was a mission kill and had to return to the shipyard for extensive repairs.) That left only *one* operational US carrier in the entire pacific - Saratoga.

However, that state of affairs didn't last long. Before the war was done, the US would have 26 front line carriers and over 100 escort carriers or "baby flat tops".

I stand in awe of the men who fought that war. And I wonder if we would have it in us as a nation to do it if it happened today.

My Dad went to the Solomon islands,a CPO on the U.S.S. Gregory, a WW I four-pipe destroyer modified into a "fast attack transport".carried the 1st & 2nd Marine Raiders around Guadalcanal & Tulagi. 13 ships in the squadron, all 13 still out there, "on patrol"... Dad never spoke much about the war,never about the night action that left him with 3rd degree burns over 40% of his body, and shrapnel that set off airport magnetometers in the '70s... And I miss him badly.