"Trouble in the Wind"


Earlier this year, authors Chris Kennedy and James Young partnered to bring to market a trilogy of alternate-history short story anthologies of combat.  They called it "The Phases of Mars".  The first book, "Those in Peril", dealt with the sea and naval combat.  The second volume, "To Slip the Surly Bonds", dealt with aircraft and aerial warfare.

The third and final volume covers war on land, and includes a story by yours truly.  It's titled "Trouble in the Wind", and has just been published.  In less than 24 hours, it's already reached the #1 New Release position on Amazon.com in Science Fiction Anthologies. 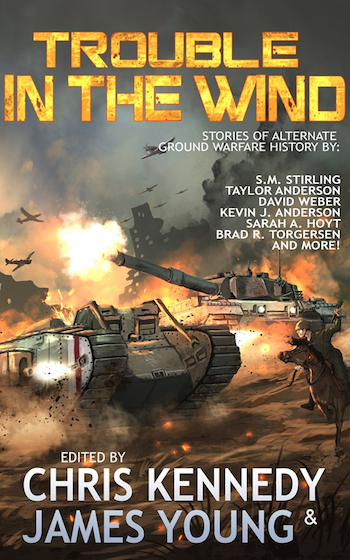 Throughout the human experience, historians have wondered, “What if?” What if Sherman had fought for the South in the U.S. Civil War? What if Germany had fought to the end in World War I? What if World War III had actually happened?

Wonder no more, for these questions, along with many others, are answered within the pages of this book ... “Trouble in the Wind,” deals with ground combat that never happened in our world… but easily could have.

The third book in the exciting “Phases of Mars” anthology series, there is something for everyone inside! From fighting Hannibal at the Battle of Cannae, to the early death of Napoleon, to scouting the bush in Angola, “Trouble in the Wind” traces a history of ground warfare…that wasn’t. From warfare in Taylor Anderson’s “The Destroyermen” series…to S.M. Stirling’s “Black Chamber,” this book has it, so come aboard and find out “what if” all of these things had changed history…just a little. You’ll be glad you did!


If you've read the blurb above, and you're familiar with my military past, you can already guess what my story covers!  Yes, it's the Angolan war, and draws together a great deal of fact with a thin gloss of fiction to tell what it was like during those years.  I'd say my story is at least 80% factual, if not more - just rearranged to bring elements together in space and time to cover a particular incident, which never happened, but is very close to incidents that really did happen.  That made it easy to write.  When I received an invitation to participate, I wrote the first draft of my story in only two days, because the subject matter was so familiar to me.  However, the Angolan bush war is relatively unfamiliar to most Americans and Europeans, so I hope it'll be fresh, interesting material for you.

My thanks to Chris Kennedy and James Young for inviting me to be a part of this project.  It was a lot of fun.

Outstanding! :-) Got it last night.