Fitness - but not for that purpose?


I was both saddened and amused to read that FitBit, an activity tracking device that monitors your level of exertion during your daily activities, has emerged as a tell-tale device as well.  NFL correspondent Jane Slater tweeted: 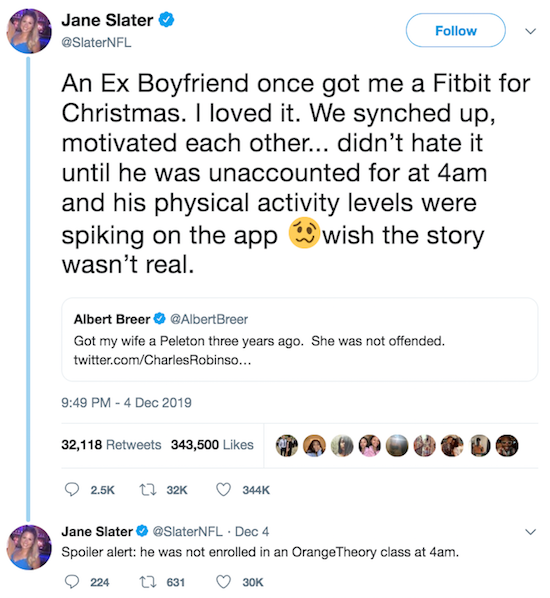 We can laugh, of course, but it's yet another reflection of how personal privacy has almost disappeared with the advent of ubiquitous consumer electronics.  Consider these facts:

There's only one way to avoid such intrusions, and that is not to carry any device that can be tracked, or that reports and/or records your activities.  I try to do this with my cellphone from time to time, because I don't want to be tethered to it 24/7/365, constantly at its beck and call.  I'd rather leave it at home.  I've also disconnected the communications device on my CPAP machine, and informed its supplier that I've done so, so that they don't keep trying to have me bring in the machine to "repair the defect".  My sleep habits are none of their business!

Sadly, very few people appear concerned about this level of electronic intrusion into their privacy.  I'm obviously among a dying breed who regard personal privacy as a sacrosanct right.  The rest of the world, particularly the commercial world, clearly does not.

You're right that too many people just accept this level of intrusion. One of my daughters tells what she thinks is a funny story: after she mentioned Brand Name X in a face-to-face conversation while her cell phone was turned off and in her pocket, suddenly ads for Brand Name X started showing up whenever she used the Internet.

She thinks it's funny because the spies got it wrong: her actual words were "I would never buy anything by Brand Name X."

And it doesn't even scare her when I say that any day now they'll improve the natural language function of their spy devices by recognizing and understanding the whole sentence.

Reason 1,001 that the smartphone the family foisted upon me lives in the underwear drawer.

It can work in your favor as well, believe it or not. An acquaintance was accused of assault by an ex-gf and proved his innocence with his phone records. It showed he was many miles away during the time he was supposedly beating her. Not great evidence, but better than her unsupported word.

Google just bought FitBit. With Google's solid track record of respect for privacy and civil rights there is certainly no cause for alarm.

There's a reason i semi-randomly say, to nobody in particular, "They shoot spies, don't they?"

And I wonder how long before certain areas (starting with restrooms, perhaps) of new building for some employers will be Faraday-caged. Partly for privacy, but mainly to keep people from fiddling phones instead of working.

My wife got me a fitbit. I took it off after the Google purchase that's the end of that. I know how far my various walks are now.

I wish there was something like fitbit that was not networked. My info can be useful to me and I'd have no problem with having to physically hook it up to my computer to get the data out.

Google: "All your steps are belong us!"

For alternatives, look at old fashioned pedometers to count steps, or a dedicated GPS receiver (only) that allows you to record and mark tracks.

WhatIfWeAllCared? said...
This comment has been removed by a blog administrator.
December 7, 2019 at 9:53 AM

Infidelity has been around as long as marriage has.
Victims of infidelity can now use technology to discover their partners' cheating.

I'm not saying the overall loss of privacy is a good thing, but it's a good thing for victims to have this information. That's how I discovered my Ex-wife's cheating; I was fixing a problem with her email account.

Also, in case you're unfortunate enough to be such a victim, here's a good website: Surviving Infidelity.

A few years ago there was a report that military fitness tracker users were uploading their exercise tracks to a not very well secured web site. Turns out you could see where and when the troops were circling the base for their runs. Their bases in Iraq and Afghanistan.

Not exactly what you want exposed to your enemies.

The general lack of privacy in this world concerns me immensely.
When you're alone inside your own residence and you STILL hear loud voices blasting into your apartment unit from the hallways, or loud conversations and motor noise from the parking lot just outside your window, that's the true definition of "oppression"---no escape from the elements of society and the world into a realm of your own making.

God created the concept of "privacy" because He understood the need for us to have a refuge wherein we could lose our inhibitions and cut loose from time to time
...same way he created confidants and lovers from the understanding that we also need someone around whom we could let go of our inhibitions and "get wild" once in a while.
In a world where most everyone is a "stranger" we need that occasional "escape" which the modern world does not see fit to entitle us to. We're expected to just "keep everything bottled up inside" and to be "eternally polite, scripted, and appropriate" 24/7.

All the more reason to keep my stone-age non-connected machine running.