Drug cartels and "weaponized" drones - a new threat from the air


For some years I've been sounding the alarm about criminals and terrorists using small unmanned aerial vehicles - so-called "drones" - as weapons, in one way or another.  Some of my readers didn't see it that way, but I was fairly sure we'd see it sooner or later.

A report from Mexico suggests that the drug cartels there are now using UAV's in precisely that way.

More evidence has surfaced to indicate the Jalisco New Generation Cartel (CJNG) is using drones armed with C4 explosives to attack its enemies.

A citizens’ militia group in Tepalcatepec, Michoacán, reports finding two drones inside an armored car that cartel hitmen had abandoned after an attempted raid on the city, which borders Jalisco, on July 25. 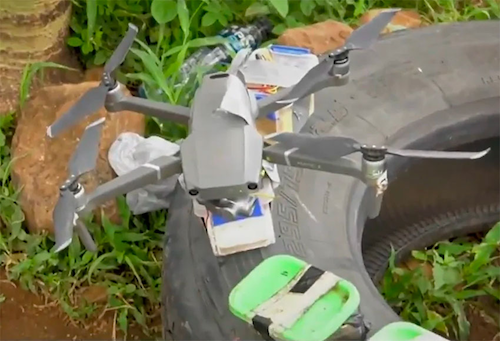 The C4 was packed with ball bearings to serve as shrapnel in Tupperware-like containers that were equipped with a remote detonation system and duct-taped to the drones, militia members explained. The drones were found in a cardboard box that was soaked in blood, indicating to the militia members that whoever was intending to fly the drones was injured before they could be launched.

In late April, the Attorney General’s Office reported that drones bearing C4 that were to be used by the CJNG to attack rival members of Santa Rosa de Lima Cartel in Guanajuato were discovered in Puebla.

Hmmm.... what size birdshot for drones? It seems police formations on riot duty may need a contingent of anti-aircraft wing-shooters on station,

All the bad people need is access to good explosives, but nobody ever smuggles anything in to the US, right?

I also wonder how many of the weapons being brandished by BLM and Antifa are from across the border and capable of full or select auto? Because, again, nobody smuggles anything into the US, right?

Raytheon makes the Phaser microwave anti-drone system, US .mil have been deploying them. Fried drone for supper!

They've had 70 consecutive days to train cadres in Portland and deploy them to other cities. It'll be a brutal November.

remote controlled airplanes and helicopters have been aroung forca lpng time and people have been putting stuff on them ever since. Drones, the quad kind especially, just increases accuracy and capacity to do some things.

It will happen in late October and November after President Trump wins and the left loses their mind, then the weaponized drones will come out and they will start coming out because the insurgency will start entering another phase. The wacky left will see no chance of getting rid of "yellow Man Bad" by current methods so they will step it up.

I've been expecting this sort of thing since drones became available to the public.

How do we know it hasn't already been done?

If you desire to see what real fear of drones looks like, try this link, or if it does not appear try googling "micro drone killer video" and you should get the link on youtube.
https://www.youtube.com/watch?v=TlO2gcs1YvM

Now that's scary. That's also achievable with today's technology, I think, so these crude weapons are just the beginning.

Start working on your 500 yard shots is about all I can say.

Nothing non-military will fly again after a solid hit from a Turkey Load.

HItting the drone is a challenge. Hitting its operator will be much easier. There are plenty of programs which allow one to find-and-fix the frequency/sender.

Then it's a matter of walking over and placing a round hole into a square head.

Seems a bit specialized and situational.
There might be a scenario where this would be the most efficient way to blow something up, but I'm having a hard time coming up with one.
.
A much more likely scenario is using these to bypass checkpoints. The crew goes in clean, receives their delivery, sets up the surprise, and escapes in the confusion.

It's not a mystery how to stop drones - here's how the pros do it:

Wasn't there a report of multiple drones buzzing a nuclear power station a while back. They never figured out who was responsible.