The lesson from Minneapolis: If you defund the police, you encourage criminals


The consequences of the riots in Minneapolis on that city's police force, and their effect on crime, are becoming clearer by the day.  The picture is not encouraging for those who live there.

Minneapolis police are down at least 100 officers since the killing of George Floyd — more than 10% of the force — straining department resources amid a wave of violence and adding extra urgency to the political debate over its future.

Over the past two months, 40 cops have resigned, been fired or are in the process of leaving the force, and another 75 have taken a medical leave for post-traumatic stress disorder they say was caused by the riots that followed Floyd’s death. Dozens more are expected to file for leave in the coming months.

MPD officials not authorized to speak publicly estimate the department, which is budgeted for 888 officers this year, could lose as much as a third of its workforce by the end of the year.

Though total reported crimes were down 31% in June and 4% by July’s end, gunfire incidents, which tie up multiple squads, soared 224% and 166% during the same period, according to MPD records ... Meanwhile, police stops are down more than 50% each of the last two months.

The deployment picture has worsened as the department tries to dig itself out of the budgetary hole it’s been in since the COVID-19 pandemic struck. While a recent class of recruits hit the streets last month, another class that was scheduled to start training in August has been canceled. And with a citywide hiring freeze in effect until at least the end of the year, there are no replacements in sight.

As a result, police are now warning residents to comply with criminals' demands.  Click the image below for a larger view. 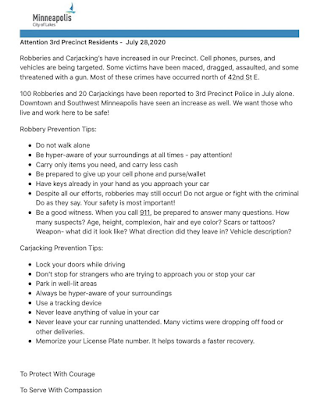 That's cold comfort if you're living in the affected areas, isn't it?  In so many words, the cops are saying "Let the criminals do their worst.  We can't stop them."  So much for protecting and serving the public!

I'm willing to bet similar problems are affecting every city where major riots and protests have erupted, and/or where calls to "defund the police" have dominated city politics.  If I were a cop in those cities, I'd be looking for another job in a more law-abiding community, at once if not sooner.  I'd even be willing to take a cut in pay and accept a loss on the forced sale of my home.  Why should I risk life and limb serving a city that regards me as a sheep to be sacrificed on the altar of political correctness?

Friends, if you find yourselves in such an environment, please be very careful.  I expect tensions to get worse before the November elections - and after they're over, who knows what might happen?

Stay safe, and keep your powder dry.  You may need it real soon now.

Captain Obvious at your service. Make sure that whatever cash you have on hand cannot also go up in smoke.

Elsewhere it is reported (NSSF) that new BLACK gun-owners are up 58% in the month of July.

Wanna bet most of those are in Minneapolis and thinking of self-defense?

And it's about to go rodeo up there...

"Tracking device in your car".

Hmm. Hadn't thought of it but those little tracker chips that you can put in your stuff are pretty cheap. Tile's are $20 on Amazon, cheaper if you buy a 4 pack. No idea if they'd work if your car was stolen, but I don't see why not.

Where is Lucas Davenport?

And now, after watching the leaked body-cam videos, we see that the real culprit in this whole feces-funnelcloud is... George Floyd. Who came charging out of the car, who was combatant, who was non-compliant from the beginning, who refused repeated attempts by officers to de-escalate. And that whole knee on neck? Not a crush, overblown by cell phone video (which, of course, didn't show the whole build-up at the beginning) and the media and the race-pimps.

Egg on face on all who thought the cop acted inappropriately. Especially all who should have known better.

Though, shame on all at MPD who held onto the videos and tossed the officers involved under the bus.

Yes, I know, the one cop wasn't the best. So? Now we know he didn't kill poor George. George gacked himself.

Unfortunately Tiles rely on your phone's Bluetooth and GPS. The app checks in with your Tiles periodically, so if you drop your keys on the street it'll let you know on a map where they lost connection. Otherwise they don't offer much in terms of GPS functionality.

The new footage demonstrates nothing that we didn't already know. We already knew that Floyd was no saint and had probably done something dumb.

Oh, so you are the arbiter of discussions now?