Stupid is as stupid does... testicular edition


Last May I asked "How is it possible for people to be this stupid?"  I was referring to the practice by some gun-owners of pointing their firearms at their own nether regions, as if about to fire;  taking pictures of the resulting tableau;  and posting them on social media.  For example: 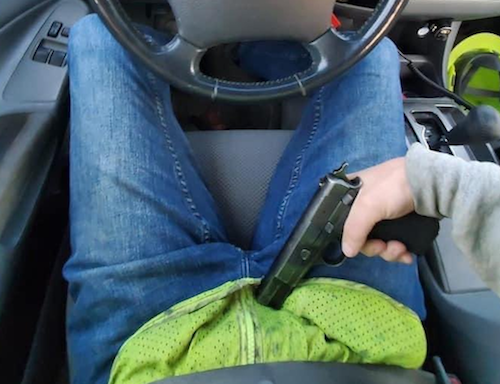 I don't want them to stop.  In fact, I want them to make sure their guns are loaded, then carry right on behaving like that.  You see, that way, sooner or later (hopefully the former), they're going to shoot off the appendages for which they so clearly no longer have any rational use.  That done, they won't be reproducing more of their kind to plague the rest of us!


It seems one of the group concerned took my advice.

A member of a Facebook group dedicated to taking pictures of loaded weapons pointed at ***** finally shot himself in the *****, according to bloody pictures and video he posted on social media and the Imperial County Sheriff's Office, which confirmed the incident to Motherboard. Rather than step back and start questioning whether the practice is wise, the group made him an administrator and are now celebrating him as their king.

On August 11, a member of the group "Loaded Guns Pointed at [B]enis" posted a video of himself pointing a loaded 1911 handgun at his junk. There’s a brief pause before the gun discharges.

The original video of the man shooting himself in the ***** and subsequent thread has been deleted, but members of the group captured the video and aftermath and reuploaded it.

“Hey [b]ois, I might have ****** up,” the man who shot himself in the ***** wrote above a picture of his naked legs and splattered blood on the carpet of his floor. A towel is stuffed between his legs and a printed out copy of the constitution is crumpled on the edge of the photo.

The guy posted through the incident as he bled. “God’s caliber [.45] went through my scrotum, mattress, boxspring, and floor,” he wrote.

No word yet on whether he succeeded in doing enough damage to his reproductive organs to remove himself from the gene pool.  We may hope.  If not, well, he should remember the advice of William Edward Hickson:  "If at first you don't succeed, try, try, try again!"

Labels: Boys and their toys, Disgust, Dumbass, Firearms, Health, The Mind Boggles
Email ThisBlogThis!Share to TwitterShare to FacebookShare to Pinterest

Just think of it as evolution in action.

What is the next level above the Darwin Awards? By all means let these imbeciles roll on. Can only improve the gene pool.

We owe a great debt to Messrs. Niven and Pournelle for popularizing that sentence.

I shuddered at that picture

“ 'God’s caliber [.45] went through my scrotum, mattress, boxspring, and floor,' he wrote"

Apparently God isn't as protective of fools as our hero (now heroine?) thought.

The STUPID was STRONG in this one! Indeed, EXTRA STRONG.

Isn't the gat in the pic a Browning GP35 or High Power?