The Beirut blast: nitrates, yes, but was anything else involved?


I'm quite prepared to accept that fireworks sparked the massive explosion in Beirut, Lebanon yesterday.  If you look at video of the incident, the initial fire shows sparkling minor explosions all around the central smoke, typical of ignited fireworks.  As for the enormous blast that followed, I'm also prepared to believe it involved thousands of tons of stored nitrates.

If you look at the color of the smoke cloud left by the explosion, it's got the rusty-red tinge characteristic of nitrate explosions. 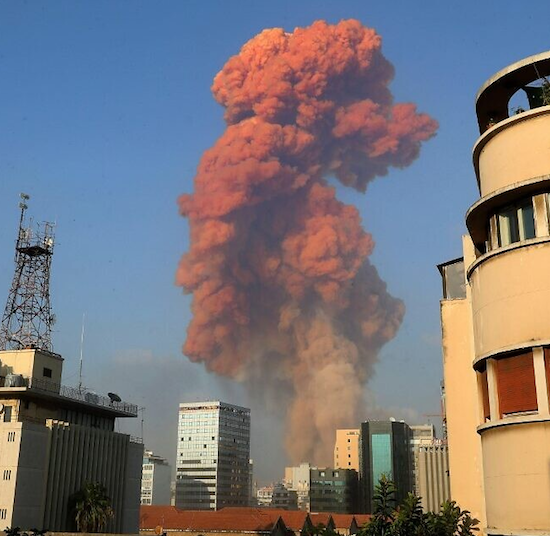 I've seen a couple in Africa (on a much smaller scale), and they showed the same effect.  The damage is also consistent with such an explosion.

Consider the Texas City disaster of 1947, which involved a similar amount of nitrates and devastated the port and surrounding areas.  Consider, also, the explosion at a nitrate fertilizer plant in Texas a few years ago, which offers a useful comparison.

However, it's known that Hezbollah had a missile manufacturing and/or maintenance facility in the port area.  I won't be at all surprised to learn that it's no longer there, and that the warheads and propellant of any missiles that were there at the time contributed to the blast and destruction.

You can take it as read that Beirut's harbor will be severely affected by this explosion for years to come.  I doubt it'll be back in any sort of meaningful operation in less than a month, and it'll operate at greatly reduced capacity until port facilities can be rebuilt, restored and replaced.  It'll be a major blow to the city's and the country's economy.

The damages caused by the explosion range between three to five billion dollars and between 200 to 250 thousand people have been left without a place to live.

Lebanon's main wheat silo was destroyed in the explosion, leaving the country with about a month's worth of grain. "We are currently looking for storage areas," Nehme said, adding that Lebanon needed enough inventories to last at least three months to ensure its food security.

The explosion will also cause major disruption to Hezbollah's ability to recruit and deploy its forces, and put a major crimp in its wallet, because it supports so many people in southern Lebanon who will now need so much more help than usual.

I doubt very much whether Israel had anything to do with this explosion, in terms of an air or missile strike or sabotage.  The video evidence of a preliminary fireworks fire is convincing.  From Israel's point of view, of course, it was a very fortunate accident, inflicting severe damage on an enemy (Hezbollah) by crippling the country that shelters it (Lebanon).

Geopolitics aside, let's pray for the dozens (at least) of people who died, and the (probably) thousands of injured and bereaved.  It's going to take Lebanon in general, and Beirut in particular, a long time to get over this.

EDITED TO ADD:  Here's a compilation of videos showing the blast from all angles, and from very close to far away.  It's the best I've seen so far.

Those "fireworks" look like munitions going off.
Could it be that Israel wasn't just "lucky"?

Israel's best interest was not served by this so i think it s unlikely they were involved. looks accidental, like raghead trying to steal some for an ied or just smoking too close to seven year old nitrate, but it won't usually go off with just a spark. takes a jolt like a cap to set it off. the stuff was in 1000 lb bags, some of the interim blasts could have been those going off individually until the final blow. who knows, maybe jehad jed blew himself up building rockets and set the whole thing off. that i would believe, lol.

There's the initial blast and fire - greyish-white or white-ish grey smoke. Then small fires are visible at the base of the cloud, then little sparkling things flying and exploding in a bright-white flash, then another larger boom, then the big-bada-boom.

First blast of grey/white smoke would indicate some sort of high explosives, the white sparkly things either fireworks or smaller warheads and stuff being tossed out by smaller explosions in the fire exploding. Then the initiating bigger explosion set of the ammonium nitrate and there you go.

Yes, something chemically not-AN either went boom or was set off by a fire (as Beirut firefighters were there fighting a fire.) What it is we may never know.

Fascinating, in a horrid way, is watching all the humidity in the air become flash-steamed by the pressure wave. Horrid, but some beauty in such horridness.

The stripped corpses show the intensity of the blast.

Yeah, let's put the fireworks warehouse next-door to the warehouse with 2750 metric tons of high grade ammonium nitrate, thats been in a non-airconditioned warehouse for seven years in a place where summers are both hot and humid. No problems with that decision.

The main human contribution was "Inshallah".

As a practical matter, should something similar happen in your area-of-operation, remember that glass is NOT your friend.

Pressure waves can break bones and rupture ear-drums. They can even kill you but usually slowly enough that responders can stick an IV in you.

Shrapnel causes bleeding and blindness. One kills quickly, the other makes life not-much-fun.

Get away from windows.

Get something solid between you and windows if there is not time to flee.

Forgot to add: Check out the lower center region. An entire warehouse is gone, leaving a water-filled crater.