No, snowflake, you don't get to tell the cops what to do


I couldn't help laughing at a tweet from an observer about the Portland riots last week.

The responses are alternately funny, and depressing in their stupidity.  An example of the latter: 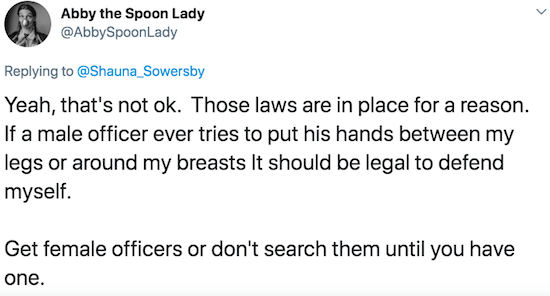 Uh, Abby, how shall I put this?  When the riot is ongoing, and the cops have to move on to stop other rioters doing stupid things, they are not required to wait for a female officer to arrive.  The circumstances don't allow for that.  Therefore, they're entirely within their rights to search you and render you harmless to them, regardless of gender issues, then move you someplace you can't pose any further threat to law and order.  That will free them to address the crimes and violations still being committed by your fellow rioters, without having to remain on their guard against you.

That's settled law all over these United States.  Circumstances alter cases.  If the situation requires it, the niceties of preferred conduct give way to cold, hard reality.  After the fact, if you think abuses were committed, you're free to sue those involved - but not until the danger is over.

You may be upset at the cops making fun of transgender issues.  That's your privilege.  However, there are many others who find that very amusing.  As American Thinker points out:


Sounds fair to me!  If Alinsky tactics are being employed against the cops, turn about is fair play.  Furthermore, you're complaining about the conduct of those you're openly trying to defund, denigrate and demoralize.  What else did you expect, snowflake?  Did you think they were going to curl up into a ball and cry about it?  I suggest a (rapid) study of Newton's Third Law.  It applies to street demonstrations as much as it does to physics.

As for other police reactions in Portland, see these two articles:

I don't think they're joking.  I hope readers who live in and/or near Portland have taken note, and are taking steps accordingly.

Huh, and here I thought the consensus was that there no "male" or "female" persons. That this just is a social construct.

But now it's the right thing to do not only to identify as female but also to embrace the difference (males can no longer have boobs, I guess) and demand a different treatment.

These people are stupid. No other way to put it, no need to sugarcoat it.

Protesters: “I have a right to break the law!”

Also protesters: “What you are doing is illegal!”

The protests haven't gone to the good-white neighborhoods, yet.

shouldn't said cops in good faith to their oath and the taxpayers that pay them stop the riots themselves regardless of what the failing mayor says? step up! its their job. get to it, politicians be damned. local coup. tar and feather. cafe'latte party in the harbor, etcetera.

Here she is breaking the law.....and now trying to use the law for her supposed advantage.

Long past time to get the hell out of there. Friend of mine left two months ago, took a bath on the house, but is now in Idaho and loving it!