Behold a master of bee destruction!


I had a small swarm of bees buzzing around my back door recently, and did a bit of research on the Internet to figure out why they were there, what they were doing, and what I could do to move them along. As it happened, they moved along anyway: but my research led me to this wonderfully inspiring story of enterprise, effort and sheer manic determination.

According to "Flannel Bob", posting on the Something Awful forums, he and his brother-in-law encountered a swarm of bees on a child's swing set in the latter's back yard . . . and started "loving with the bees" to get rid of them. The full story may be read here (WARNING: strong language/profanity alert), but I linked to a few of the photographs to give you a foretaste. Go to the link to see more, and read the full story.

It started with the bees clumping on the swing set. 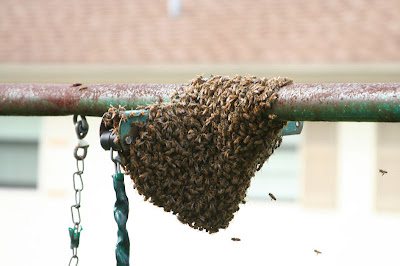 The brother-in-law tried throwing a tennis ball at them, without much response: so he then threw a 40lb. towbar! 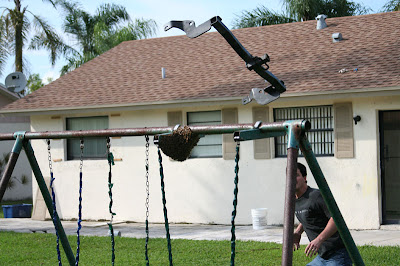 This knocked most of them off the swingset, but they simply regrouped and clumped around the bar once more. This called for stronger measures: a brazier filled with rags, with gasoline poured over them. 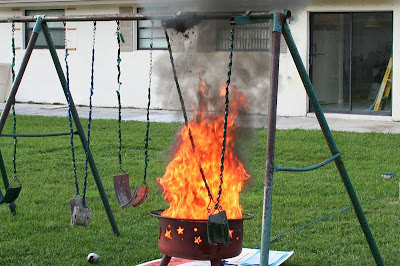 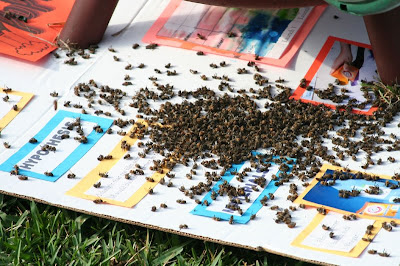 . . . but there were still some left. Clearly a bigger fireball was needed. To obtain this, first, the desperate duo threw 1½ quarts of paint thinner onto the fire. 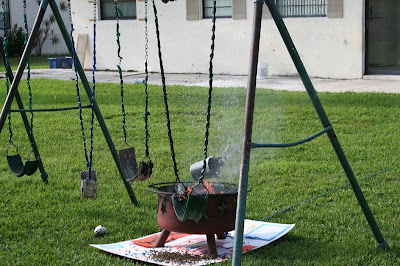 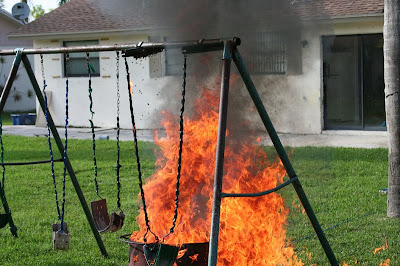 They still had a few bee survivors - although at this point, I think the object of the exercise was less to finish off the bees than to see how large a fireball they could create without going to mushroom-cloud levels of physics!

As a final act, they threw two quarts of gasoline onto the fire. As "Flannel Bob" exclaims on the forum, "OH DEAR LORD ITS SO BEAUTIFUL. I AM SO PROUD TO BE AN AMERICAN RIGHT NOW." 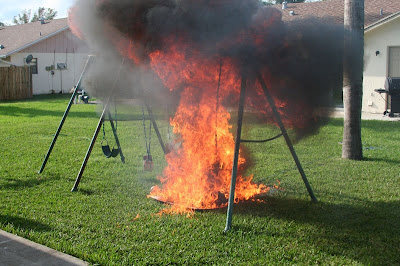 This certainly seems to have resolved their bee problem once and for all! As "Bob" notes: 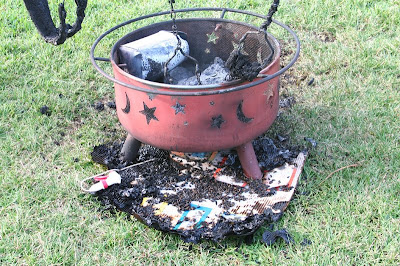 Looks like a bee-yootiful time was had by all! Go over to the Something Awful forums to read (and see) more about it (with the language warning already noted).

Labels: Boys and their toys, Funny, Silly
Email ThisBlogThis!Share to TwitterShare to FacebookShare to Pinterest

Talk about redneck overkill. Love it! :)

We Aussies tend to use the same kind of overkill, ourselves, heh

The only thing as funny as the running commentary with the pictures would be the comments people left.

"Oh my God, you are what every growing child and struggling man should strive to become. Heroism, ingenuity, and selfless bravery against the bees menace at its finest"

My baby brother's new house is having bee issues, I think I should probably hide this from him.