US Special Forces air support - back to basics?


I'm intrigued by a program currently under way in the US Special Forces, examining whether a simple propeller-driven strike aircraft, such as were used in World War II and Korea (and, to a lesser extent, in Vietnam) might be a viable option for certain operational environments. Defense Tech reports:

In a move that harkens back to the days of recycled World War II torpedo bombers sheep-dipped as close air support planes, the Navy intends to field a limited number of turbo-prop attack planes outfitted with the most modern surveillance, tracking and weapons systems to help special ops forces keep track of bad guys and, in a pinch, put warheads on foreheads.

Call it an A-1 Skyraider on steroids – a “Back to the Future”-resurrection of a kind of plane last seen pounding enemy positions with rockets, guns and bombs over Vietnam, Cambodia and Laos in the 1960s.

Code named “Imminent Fury,” the classified, year-long program has so far produced one fully-outfitted plane and is set to field four more to directly support SEALs and other operators on the battlefield in Afghanistan.

According to a source close to the program who declined to be named, the Navy has leased an EMB-314 Super Tucano for the job. Made by the Brazilian aerospace company Embraer, it is now being tested on desert ranges in California and the service’s top test facility at Patuxent River Naval Air Station, Md. The Navy loaded it up with sensors and weapons systems that “would make an F-16 pilot blush,” the source said. 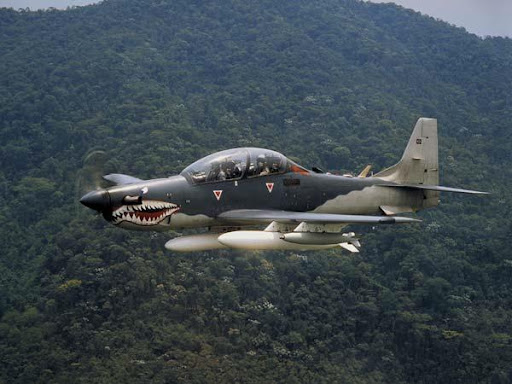 With top end electro-optical and infrared sensors, laser and GPS-guided bombs, rockets, twin .50 cal. machine guns, encrypted radios – and even the capability to tie in UAV surveillance feeds – the Super Tucano outfitted for the SEALs is a ground-pounder’s angel from above.

There's more at the link, and also here and here.

The Super Tucano is a five ton, single engine, single seat aircraft. It is basically a prop driven trainer that can be equipped for combat missions. The aircraft can carry up to 1.5 tons of weapons, including 12.7mm machine-guns, bombs and missiles. The aircraft cruises at about 500 kilometers an hour and can stay in the air for about 6.5 hours per sortie. 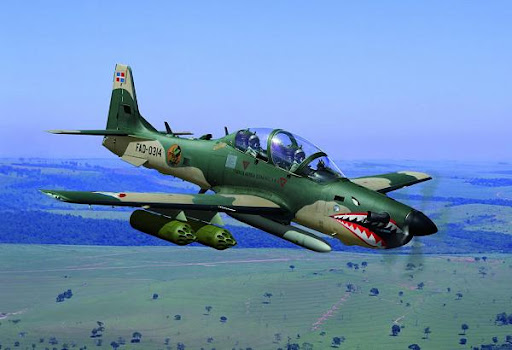 Colombia is already using Super Tucanos for counter-insurgency work, which is where American SOCOM operators saw it up close. They liked what they saw, and persuaded SOCOM to lease one and try it out. For some older SOCOM operators, the Brazilian aircraft is yet another attempt to revive the legendary Vietnam era A-1 Skyraider. This was the most popular ground support aircraft during the 1960s. Developed at the end of World War II, the A-1 was an 11 ton, single seat, propeller driven aircraft that carried 3.5 tons of bombs and four 20mm autocannon. Cruising speed was 475 kilometers an hour, and the average sortie was about four hours. Ever since World War II, ground troops have been agitating for another A-1. The A-10 came close, but did not have the persistence (long time over the combat area) of the A-1. 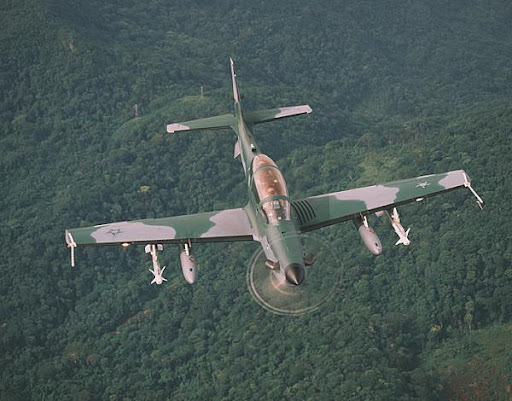 The Embraer EMB-314 Super Tucano costs $9 million each, and come in one or two seat versions. SOCOM wants the two seater, with guy in the back running sensors. The bubble canopy provides excellent visibility. This, coupled with its slow speed (versus jets), makes it an excellent ground attack aircraft. The SOCOM aircraft could be equipped to fire Hellfire missiles and drop smart bombs. SOCOM wants to lease four Super Tucanos as soon as possible.

Again, there's more at the link.

I was interested to see the role of the EMB-314 spelt out in an official Navy Irregular Warfare Office briefing earlier this year. The slide below is taken from that briefing, and is self-explanatory. (Click it for a larger view.) 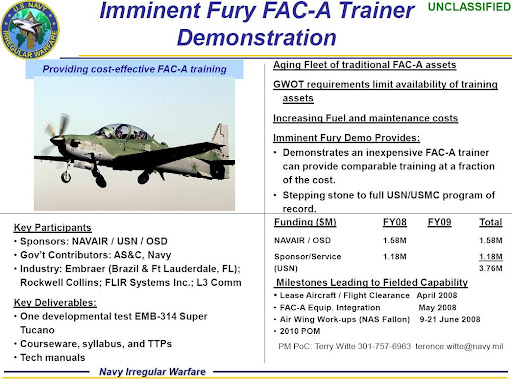 In environments where ground-to-air missile defenses are relatively scarce, or primitive when they exist at all, and where massed anti-aircraft fire is unlikely, such aircraft are likely to prove very useful indeed. I'll be interested to see how the 'jet jockeys' of the USAF and USN will react to the intrusion of such low-tech, non-stealthy solutions onto their 'turf'. Considering that at present and predicted prices, one can buy more than a dozen EMB-314's for the price of a single F-35, I think economics alone will force them to accept it!

Seems as if it might be smarter to go with the AT-6b, the COIN version of the Texan II, as it's an airframe already in use by our military, but from what I've read, SOCOM is more interested in getting these items in the field ASAP, ergo lease agreements vis-a-vis outright purchase.

Of course, if you want available and cheap, you could just hang a Hellfire w/ the requisite laser designator off of your C-208 -
http://www.defenseindustrydaily.com/bird-dogs-for-the-iraqi-air-force-03578/

"In environments where ground-to-air missile defenses are relatively scarce, or primitive when they exist at all, and where massed anti-aircraft fire is unlikely"

Environments which are much more likely to occur when you have an effective air superiority fighter to prepare the battlespace. Do we still have one of those?

I know come Vietnam War Forward Air Controller who are drooling over this.

I wonder what the IR signature off of a turboprop - exhaust mixed in the slipstream, mind - is compared to even an A-10's turbofans.

As for the Tucano, I see a new wing with more guns (2 .50s? That was inadequate in 1938!) more fuel, and a bigger engine. It might take a bit of experience to see the need for these, but you heard it here first.

Arm this thing with perhaps Hellfire or Viper Strike, four to six guns and 70mm rockets, half-decent sensors, and off you go.