I'm grateful to reader Carol M. for drawing my attention to a book review in the Wall Street Journal. It looks at 'A Troublesome Inheritance: Genes, Race and Human History' by Nicholas Wade - and boy, is he going to set the cat among the pigeons with this one! 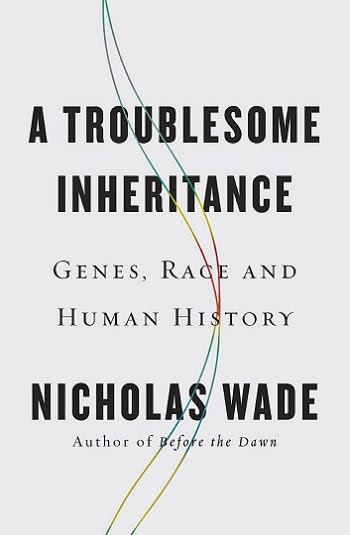 The reigning intellectual orthodoxy is that race is a "social construct," a cultural artifact without biological merit.

Since the sequencing of the human genome in 2003, what is known by geneticists has increasingly diverged from this orthodoxy, even as social scientists and the mainstream press have steadfastly ignored the new research. Nicholas Wade, for more than 20 years a highly regarded science writer at the New York Times, has written a book that pulls back the curtain.

It is hard to convey how rich this book is. It could be the textbook for a semester's college course on human evolution, systematically surveying as it does the basics of genetics, evolutionary psychology, Homo sapiens's diaspora and the recent discoveries about the evolutionary adaptations that have occurred since then. The book is a delight to read—conversational and lucid. And it will trigger an intellectual explosion the likes of which we haven't seen for a few decades.

The title gives fair warning: "A Troublesome Inheritance: Genes, Race and Human History." At the heart of the book, stated quietly but with command of the technical literature, is a bombshell. It is now known with a high level of scientific confidence that both tenets of the orthodoxy are wrong.

A computer given a random sampling of bits of DNA that are known to vary among humans—from among the millions of them—will cluster them into groups that correspond to the self-identified race or ethnicity of the subjects. This is not because the software assigns the computer that objective but because those are the clusters that provide the best statistical fit. If the subjects' ancestors came from all over the inhabited world, the clusters that first emerge will identify the five major races: Asians, Caucasians, sub-Saharan Africans, Native Americans and the original inhabitants of Australia and Papua New Guinea. If the subjects all come from European ancestry, the clusters will instead correspond to Italians, Germans, French and the rest of Europe's many ethnicities ... It appears that the most natural of all ways to classify humans genetically is by the racial and ethnic groups that humans have identified from time out of mind.

To date, studies of Caucasians, Asians and sub-Saharan Africans have found that of the hundreds of genetic regions under selection, about 75% to 80% are under selection in only one race. We also know that the genes in these regions affect more than cosmetic variations in appearance. Some of them involve brain function, which in turn could be implicated in a cascade of effects. "What these genes do within the brain is largely unknown," Mr. Wade writes. "But the findings establish the obvious truth that brain genes do not lie in some special category exempt from natural selection. They are as much under evolutionary pressure as any other category of gene."

Effectively, Mr. Wade has demonstrated that racial differences are genetically based, rather than social constructs - in other words, all those saying that the different races are basically identical under the skin, or that differences are only 'skin deep', have been wrong.  This doesn't surprise me, but I predict that the politically correct 'race industry' talking heads are going to either ignore his scientifically indisputable conclusions, or try to drown them in polemical pontifications - anything rather than face (much less accept) the facts.

Needless to say, I'm going to read the book.  It should provide useful material to casually launch into conversations with the overly sensitive, and then watch their heads explode as they try to rationalize their way around it.

Sorry. It was gonna happen sooner or later.

Looks like a very good read. I will be checking it out.

Meh. Obviously there are racial differences hard wired in for all sorts of things. Color, hair, build, predominance of muscle type etc. This is the important sentence in that piece. "What these genes do within the brain is largely unknown,"

So are there genetic difference in brain makeup? Of course. Are they significant, do they impair cognitive function, how much etc are all open questions. Without knowing any of that it's just a little factoid.

So what does this actually mean? Besides giving ammunition to the stormfront/apartheid crowd.

I think it's important to acknowledge differences if they exist (which they appear to), but it is also important not to discriminate solely based off of race (or gender, since there are gender differences as well). Some group may be on average better than some other group at a certain task, but hiring should be 100% merit based. If someone defies a stereotype or trend, more power to them; but on the other hand, there shouldn't be laws/etc enforcing the stereotype by saying "X group can't do the job well enough to get hired on their own, so we'll have to force people to hire them." I think the PC/SJW crown is the worst obstacle in the path of equality these days