I'm sure many readers who are into the shooting sports and/or defensive firearm use have heard of Hornady's relatively new Critical Duty round using the company's FlexLock bullet.  (Click the image below for a larger view.) 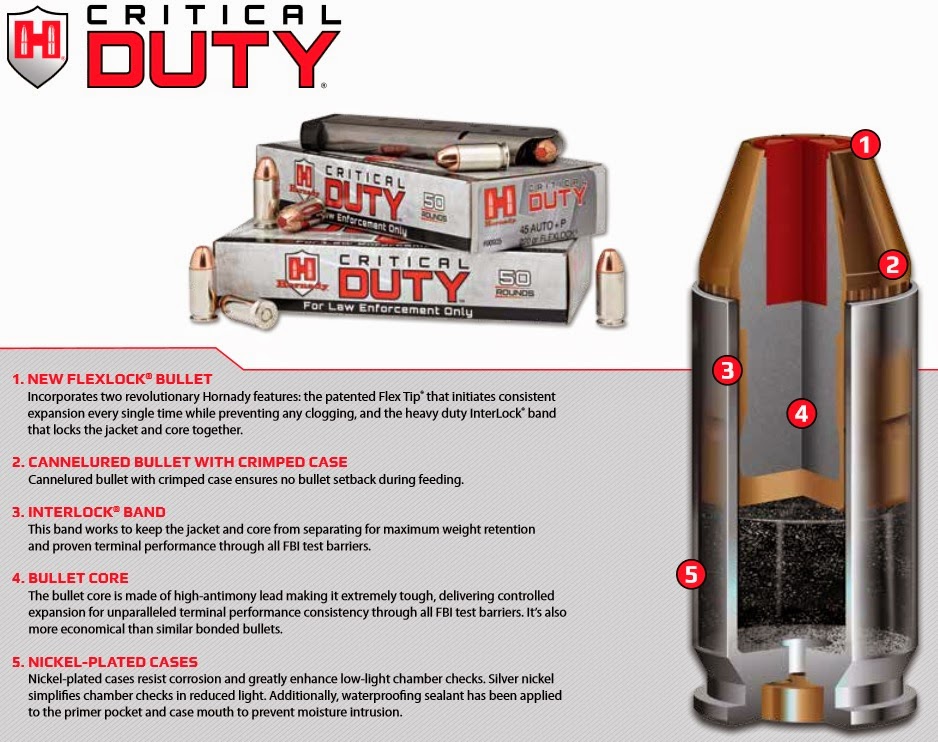 It's marketed as being 'For Law Enforcement Only', but it's freely available to non-LE shooters as well, in both standard and overpressure (+P) loads. (Hornady's Critical Defense range of ammunition is loaded to lower pressures using the FTX bullet, but I don't see much point in using it when the more potent law enforcement version is so freely available - why settle for lower performance when you don't have to?  For those interested, Hornady provides more information on the difference between the two rounds.)

I've been hearing more and more feedback from shooters claiming that the Critical Duty range is pretty good stuff.  Performance against animals has reportedly been effective in most service calibers and cartridges, and it appears to feed well in most pistols in which it's been tried.  It's lower in energy than some competitors:  for example, my current carry load in 9mm. is Winchester's Ranger T-series 127gr. +P+ JHP with claimed muzzle energy of 441 ft/lbs, almost 20% more than the Hornady Critical Duty 135gr. +P JHP's figure of 369 ft/lbs.  However, the latter should have sufficient to get the job done - and unlike the Winchester offering, it carries no ominous warnings about excessive pressures or forbidding its use in carbines.  It'll probably beat up guns (and shooters!) less than the Ranger round, while its penetration and barrier performance appear to be at least as good as the latter.  Energy isn't everything.

Handgun ammunition is pretty much of a muchness across most major manufacturers these days, with the best offerings from producers like Federal, Hornady, Remington, Speer and Winchester all performing at similar levels.  However, judging from comments by shooters and instructors whose opinions I respect, two newer-technology rounds are beginning to stand out as top performers among the current crop.  One is the TAC-XPD and XPB bullets from Barnes, loaded in their own cartridges and by Cor-Bon, Buffalo Bore and other smaller manufacturers in premium ammunition (I use Barnes' 140gr. load as my .357 Magnum carry ammo).  The other is the new Hornady Critical Duty round, which I'm currently testing.  So far, so good.

I'm not being paid to mention this stuff, nor do I get any kickback if you buy it:  but I thought my readers would like to know about it.  Handgun rounds are almost uniformly anemic in comparison to most rifle rounds, so any advance in technology that makes them even a little more effective is to be welcomed.

I carry the Hornady ammo you cited. It's good stuff.

Why would +P+ ammo not be safe in a carbine? Are they as a class not built to at least the strength of a pistol barrel? I would be surprised if pressure would continue to rise above that generated in the first 4-5" of bullet travel, sufficient to burst a barrel. I can't see it spiking that late.

@Will: It's a function of the pressure curve. At +P+ pressures, the curve tends to be very steep upward, peaking at above the norm for the caliber; then, as the bullet exits the barrel, it drops off sharply - but the bullet has to exit the barrel to allow the pressure to dissipate. In a 4" to 5" handgun barrel, that happens relatively quickly. In a 16" carbine barrel, the pressure is contained relatively longer, so the pressure curve can spike higher - potentially to dangerous levels. Winchester warns specifically against using their RA9TA round in carbines, and since the warning is linked to its pressure, it's presumably for that reason.

I've been carrying it myself. In part because the testing Hornady looks good but I've been able to find it as cheap as $25 for a 50 round box.