Remembering "A Man in Full"


I've frequently mentioned in these pages the name of the late, great Jeff Cooper, one of the most important figures in firearms theory and practice since World War II.  A DVD presentation about his life is titled 'Jeff Cooper: A Man in Full'. That's a pretty good summation of who and what he was. I had the privilege of meeting him in South Africa many years ago, and never forgot what I learned from him. It helped to keep me alive on more than one occasion. 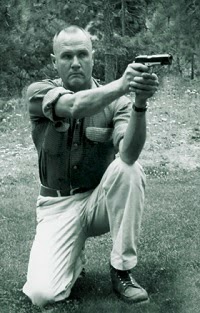 In the NRA magazine 'American Rifleman' there's a regular feature called 'Throwback Thursdays'.  The latest is an article dating back to 1993 about Jeff Cooper by the late, equally legendary firearms writer Finn Aagaard, a fellow African whom I also held in high regard.  Here's an excerpt.

Cooper has written that "Man fights with his mind. His hands and his weapons are simply extensions of his will...” He says that of the 50 or so of his students who have been involved in lethal confrontations, not one student claimed to have saved his life by his dexterity or his marksmanship, but rather by his mindset.

He defines the combat mindset as “...that state of mind which ensures victory in a gunfight. It is composed of awareness, anticipation, concentration and coolness. Above all, its essence is self-control. Dexterity and marksmanship are prerequisite to confidence, and confidence is prerequisite to self-control.”

Cooper wrote about this new doctrine of practical pistolcraft, and presently he was being asked to teach it, mostly overseas. Working with the “good guys” in hot spots in Latin America, Europe and Africa, he evolved simple and effective ways of teaching the modern technique.

A man of many parts is Jeff Cooper, apart from being the guru of the combat pistol, warrior (as all true men are at bottom), Marine officer, spook, swordsman, bon vivant, historian, scholar, adjunct professor of police science, connoisseur of fast cars, expert rifleman and big game hunter, adventurer (“peril — not variety — is the true spice of life”), philosopher, NRA director, a superb writer and author with a wonderful command of the language, father and grandfather, husband to one of the most gracious, charming and delightful of ladies (doubt not her core of steel, though — else how could she have managed Jeff for more than 50 years?), a seeker of excellence whose creed is Honor, Duty, Country, a man with a great gusto for life, and, perhaps above all, a teacher.

... he is truly the father of the modern technique of the pistol. Others helped evolve it — and it continues to evolve — but he put it all together, promoted it, and taught it. No one since Samuel Colt has had a greater impact on practical pistolcraft than Jeff Cooper.

I have most of Col. Cooper's books in my permanent collection.  If you haven't read them yet, you're in for a treat.  His volumes of memoir and personal philosophy, listed below, are my favorites.  Click on a book title to be taken to its page at Amazon.com.

To Ride, Shoot Straight, and Speak the Truth


All are highly recommended reading.

He was a hell of a wordsmith, among other attributes.

One of the things I remember from his books (about panic): If a man knows he must keep his head, he will keep his head. Couple that with three deep breaths exhaled thru the teeth, and you can operate thru a lot.

It's helped me when I was faced with unexpected peril.

Might I suggest the three "Gargantuan Gunsite" readers for someone who isn't all that familiar with the Col.s' writings?
I was lucky to acquire all of his books years ago. Then one day I called Gunsite and asked if I could send them out for his auto- graph. He said sure and I did...

I can't add anything to that, Peter, but it makes me wonder about another writer and blogger with a similar viewpoint: Kim Du Toit. Any idea what he is doing these days?

I was out for a ride on my HD Super Gluide back in the 70s at Hurn Range back in the UK and he was visitints the comp and he asked why i rode a HD and i repied there were 3 things i loved my HD my 1911s and his writings made him grin but at the time he did not rate Harleys.