That's the title of an article in the Telegraph.  It refers to payment habits in the UK, but I'm sure it's pretty similar on this side of the Atlantic.  Two graphs in particular jumped out at me.  First, the number (i.e. quantity) of transactions in cash and via automated credit: 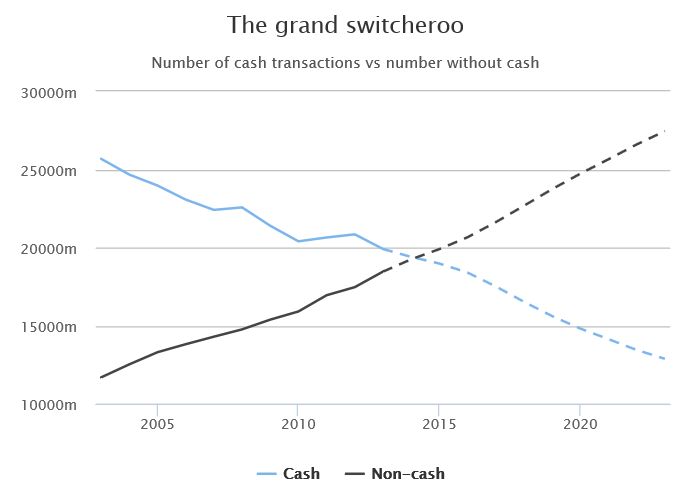 And then the actual value, in British pounds, of those transactions:

Those graphics put a very different perspective on the situation, don't they?  They help to explain why some businesses are now refusing to take cash at all.  The value of the transactions that they execute in cash is so small that it's literally more trouble than it's worth to keep cash on hand for those customers.  They'd rather do business electronically;  and if you're not prepared to do that, they'd rather you took your business elsewhere.

I can only say that such an approach is fine, as long as the electronic network is operational.  When it's not . . . not so much.  I wrote about that in my 'lessons learned' posts after Hurricane Katrina, when those who relied on banks whose networks were literally underwater couldn't access their accounts at all.  I daresay the routine reliance on electronic financial transactions, rather than cash, has only become greater since then;  and when it goes down (as happened with the national EBT network in 2013), the results can be dangerous in more ways than one (such as, in the example cited, threats of rioting by frustrated EBT recipients and attempts to defraud supermarkets that tried to help them).

Personally, I make sure to keep a minimum of one month's expenditure (including all automated or check-based bill payments) available in cash at any time.  Having "been there and done that" when things went to hell in a hand basket, I have no intention of being caught short like that again.  If I need to buy essentials when the electronic payment network is down, I want to be able to wave folding green pieces of paper at the cashier.  I'm willing to bet I'll be served, while those waving pieces of plastic will be SOL.  BTDT.

Um..."This Note Is Legal Tender For All Debts, Public And Private."

It is ILLEGAL for any business to refuse cash. Or it would be, if there were any rule of law in America anymore.

Aside from the obvious issue of technical failures rendering many people penniless in a microsecond the unspoken BIGGER issue is the fact that money in electronic form can be appropriated at will without warning bynthosemwith access to it, specifically the banks and .gov.....two factions of the crime consortium running America.

Cash....or something essentially identical will always have a place in a society. That place evolves and changes but odds are it will NEVER go away as long as humans are clever dishonest monkeys.

Kinda true for me. the use of cash at my business has declined by 34 in the last 10 years.

This statute means that all United States money as identified above is a valid and legal offer of payment for debts when tendered to a creditor. There is, however, no Federal statute mandating that a private business, a person, or an organization must accept currency or coins as payment for goods or services. Private businesses are free to develop their own policies on whether to accept cash unless there is a state law which says otherwise.

I was at the local gas station a few years ago on just an average afternoon. Only the computer network went down and while everyone else was standing around waiting for it to come back up so that they could pay for purchases or start buying gas, I was the only one with a $20 bill in my pocket (two, actually) that could buy gas and go home.

I've had the same experience as Graybeard, but in a grocery store. I hadn't thought about having a month's worth on hand, but that makes sense... Need to start saving some green up... sigh

One of the big reasons that the .gov is pushing cashless transactions is to gut the untaxed economy, which is estimated to run about X3 to the paper trail economy. That's a huge tax bite they are drooling over. Of course, what those idiots don't understand is that it exists mostly to get around the increased taxes as your income rises. A lot of that business may just disappear, which will probably tip our economy over the edge.

My son works at the local Sam's Club. Their gas stations will only 1) sell to club members and 2) accept credit/debit/gift cards. No cash. If the 'puters go down, no gas sales.

There's an advantage to going a bit beyond Peter's recommendation; keeping a couple thousand dollars on hand, in bills of assorted denominations, allows taking advantage of happy circumstances, such as buying a desired gun, tool or antique in the secondary market for which only cash will do.

Regarding monthly obligations, adding a few dollars to each month's regular payment will result in the creation of a "payment cushion" in your account, be it the electric utility or the cable outfit. True, you're not earning any interest on it, but having a month's payment plus ten percent as a credit in your account means should something untoward occur suddenly, such as electronic system failure, job loss, etc., you know you'll have a month before you're sitting in the dark or unable to email resumes.

And, as SiG pointed out, having fifty dollars (or more) in assorted bills tucked away in your wallet can become worthwhile pretty quickly (Pro tip: don't forget a few ones and fives - if you have to walk away without getting change, better done with a one or five than a twenty).

there's another huge benefit to dealing in cash, and that is that many small business people will offer you a substantial discount for paying with folding green money.

I've moved out of my state in the last two weeks, and between movers, cleaners, painters, and landscapers, I have saved by asking for cash discount more than the price of two brand new Glock 10 millimeters that my wife and I will be carrying in Alaska this fall.


The reason the business people offer cash discounts has nothing to do with under the table economy. A small business person who bills you has to pay office staff or remove himself from productive time to generate a bill. Then he has to wait for you to get the bill and send him a check, which may or may not bounce. Even if you pay at the point of sale, a check may bounce and he still has to figure out where he can deposit it in some cases. Credit cards are worse with their off the top to 2-5 percent service fees, Plus many credit card transactions can be reached back out of the receivers bank account for a number of reasons.

Small business people who watch their money are almost always willing to offer folding green cash discounts. I only had one small business person say it was all the same to him, and it turned out he was working for someone else. Every single small business owner offered me discounts, ranging between 10 and 25 percent for cash.

I think cryptocurrencies are the future, but there's no replacing physical money (by which I mean physical money with inherent value.) Bitcoin alone has had many problems with adoption when terminals designed to accept it--not the network, the terminals--break down.