I had fun last night reading the draft of the next Lawdog Files book, 'African Adventures'.  It's scheduled for publication less than a week from today, and is already available for pre-order. 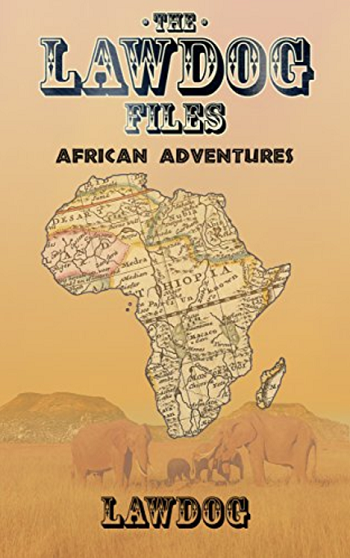 I had the honor of writing the Foreword for the new volume, following in Larry Correia's footsteps (he wrote one for the first book in the series, which became a runaway bestseller in its genre last month).

Fans of Lawdog's writing will love this one.  He's included many old favorites, not just about his youth in Africa, but also about life, the universe and everything in these United States.  What's even better is that he's written a lot of new material for it.  Readers are in for a real treat with the story of the man-pig, the sapper lizards, the African version of Fourth of July fireworks (including bagpipes, bombs and baboons), and many more.

Lawdog introduces those Fourth of July fireworks like this.

Now, I want you to close your eyes.  Imagine a five acre chunk of bare West African red clay bounded on three sides by dense, damn-near-impenetrable triple-canopy tropical rain forest.  On the fourth side (the left side, for those still following along) is the sullen glorping majesty of the Warri River.  You have this fixed firmly in mind?  Now, in the middle of that river, anchor three dilapidated barges (that hadn’t been there two days previous).  On the near end of the five acre bare spot, imagine that someone has dug a slit trench, and at the other end of the clearing, postulate that person or persons unknown have stacked barrels and tyres.


Yes.  When a slit trench is needed for spectators to enjoy 'mere' fireworks, that have been invented/created and set up by bored, homesick expatriate engineers, who have access to large quantities of booze and industrial explosives . . . well, interesting things may happen . . . particularly when baboons get involved.  Just sayin'.

Publication is scheduled for August 10th (Thursday next week) in e-book format, with a print edition to follow as quickly as it can be arranged.  Miss D. and I have already pre-ordered our copies.

Oh crap. You've got me already.

Not me. I am going to, impatiently, for the print edition.

Seconded. I can't wait to read the rest of the Independence Day story! *chortles in gleeful anticipation*

Bored Engineers paired with explosives? What could possibly go wrong?

When my son was in Engineering school, he took a course in demolition and he emailed some building plans and then called to ask my advice. For the next 45 minutes we discussed the best way to bring the building down.

I'm sure NSA had a few heart palpitations. I did greet NSA, however, so they would know that I had only good intentions at heart.

A friend told me a tale about how he and his brother would call the other and attempt a one-up having to do with weapons and explosives. This went on for some time. I think this occurred during the 80's, in the SF Bay Area.
These were both former 'Nam vets and former deputies. One day, he gets a call from some agent based in SF, inviting him to come in and talk about his activities. Seems the contents of the phone calls triggered word or phrase sensitive phone monitoring systems. He said it was more an eyebrow raising listen for the alerted agents, rather than a lock & load reaction, hence the fairly polite call.
Interesting guy. He packed a .44 Automag as a deputy. His primary beat was East Palo Alto in the 70's. Turns out he obtained one of the first in the area, as years later I met the former FFL who sold it to him. He was also a character. Both are sorely missed.