The battle for the top of the tree


Ashbutt (top shelf) and Kili (lower shelf) are poised for battle over who gets to be top cat.  Just a few seconds after this picture was taken, the fight was on. 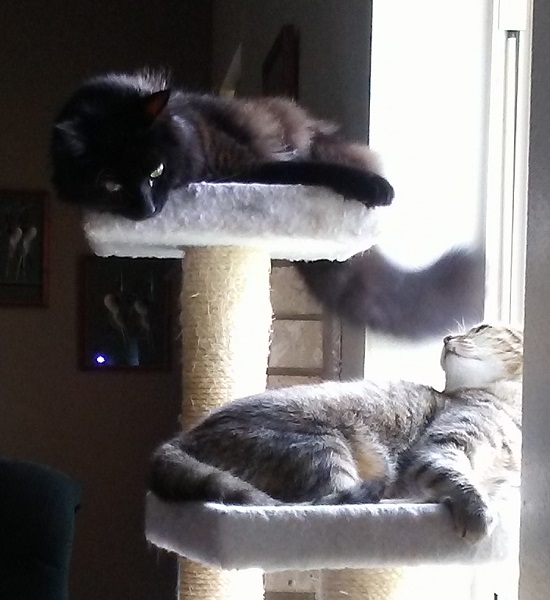 Ashbutt won that round.  He's about twice Kili's size and weight.  However, she gets her own back with ambush tactics that he still hasn't figured out.  She's also faster and nimbler than he is.  What's more, she probably remembers him as the upstart kitten who muscled his way in here less than a year ago, and she's not about to let him usurp her senior status.

Heh, I thought that was going to happen when I first saw the picture.

Cats can be masters of psychological warfare as well, random senseless terror attacks so the enemy is never truly able to relax.

PS.. To save you the hassle of digging out yer' "Latin>English" Dictionary...... "Fortune Favors The Bold!!!" Compliment of the late Mike Vanderboegh of "sipseystreetirregulars.blogspot.com"

Our pair of cats (Burmese and Siamese) also battle for the top spot too, but sometimes, they share it. Never know which action will occur.

I have a brace of kitties as well and figured "fight" was on the menu with Bottom Kat's body lingo. My kitties are siblings, but one is beastly muscular and the other is petite and half liquid. The still play fight with 50/50 odds.