Glenn Reynolds, a professor of law and author of the popular Instapundit blog, suggests that robots and artificial intelligence may be keys to making the legal system more accessible and understandable.

That’s the central thesis of Rebooting Justice:  More Technology, Fewer Lawyers, and the Future of Law, a book by my University of Tennessee colleague Benjamin Barton, together with the University of Pennsylvania’s Stephanos Bibas. 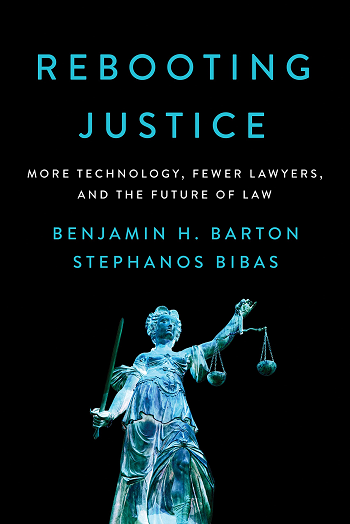 Their thesis: The very things that are making life worse for lawyers and law firms may pay off for lower- and middle-income Americans by finally making legal services affordable.

In many states, we’re told, 75% or more of family law disputes involve at least one party trying to proceed pro se — that is, without a lawyer.  Unsurprisingly, these people usually do badly.

The authors quote Derek Bok, who said that in America, “there is far too much law for those who can afford it, and far too little for those who cannot.”  But the good news is that law may be about to become a lot more affordable.

One example:  A  lawyerbot called Do Not Pay helps people contest parking tickets.  In London and New York, it helped people overturn 160,000 tickets in its first 21 months.  Its creator, 19-year-old London-born Stanford student Joshua Browder observed:  “I think the people getting parking tickets are the most vulnerable in society. These people aren’t looking to break the law. I think they’re being exploited as a revenue source by the local government.”

Intrigued, I took a look at a US edition of Do Not Pay.  It didn't play well with some browsers - I don't know why - but performed OK with Microsoft Edge.  Here's a quick video overview of the sort of cases it can handle.

I have to admit, I was impressed.  If this technology can be applied more widely, I predict that the present unemployment problems in the legal profession will become much worse.

Far more likely the trial lawyers will demand it be banned and anyone using it be prosecuted for practicing law without a license. Licenses are to keep the cheap competition out and lawyers have an inside track on legislators.

Something like this happened in Fla. a few years back with a paralegal setting up shop to provide common forms and papers for common legal affairs. She promptly got run out of business by the legal profession for milking their cash cow. Don't remember how that ultimately turned out though I know it got appealed to fairly high courts in FL.