. . . because they may have weapons more powerful than you think.

Antifa has disrupted political and cultural activities across the USA for months now.  Here's a brief overview.

Now it's apparently decided to take on a major Internet opponent.  According to a post on Gab yesterday, Antifa has decided to try to disrupt 4chan's activities.  This infographic was provided to explain their plan of attack.  (Click the image for a larger view.) 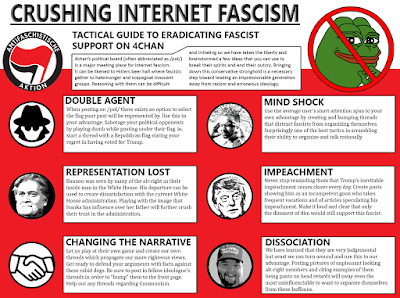 No sooner had they released this, than 4chan struck back through another 'friendly' message board, 8chan, commonly known as the GamerGate board.  It's reported:

We checked out some of these and a lot of the ones we can confirm actually check out to be true.  We couldn’t go through them all of course because there are thousands and thousands of names. Here is the 8chan link with the names.

Just in case for some reason this link gets taken down, we have had the pleasure of saving all of these for re-release if such a thing happens.  The OP of the post also promises to post additional personal info of the members.  And if you're an Antifa member checking out this site, maybe see if your name is there.  They are all in alphabetical order by last name.

Some of them who attended Charlottesville and committed violence have also been doxxed with pictures and personal info including Facebook page, home address as well as some other information.

It's going to be a bit difficult to be a strong, motivated 'warrior' against the right wing, when your name, address and other identifying information are known beforehand to every law enforcement organization involved (not to mention those on the other side).  Methinks Antifa has just done more damage to itself than it knows how to handle.

It couldn't happen to nicer people, of course.

From what I know of 4chan it's filled with entirely nasty people. Who would have thought that was a good anthill to kick over?

Sauce for the goose.

I wonder how they'd feel about a bunch of peaceful (really, not the left-wing "peaceful") masked protesters showing up outside their homes or place of employment for a rally?

Picking a fight with 4chan is right up there with getting involved in a land war in Asia. It's really, really dumb.

"It couldn't happen to nicer people, of course."

"Yeah, now that I'm going through these, a fourth is empty accounts, a fourth is alt-right types, a fourth is randos with nothing incriminating and the last fourth is bots and corporate accounts. The fuck? Kill yourself OP"

per the 8chan thread.

i am guessing some jackass just ran a bunch of pics through a face matcher.

also loving the dwarf with a 1488 helmet gracing said websites background, does that not slow you down even a moment when posting this stuff...?

Yes you are correct, Antifa is having their own tactics used against themselves. I did look at the poster that you posted on your website. It is actually a good idea for a counter operation..It would get inside the "Alt-Right" OODA loop and cause confusion and dismay. But they didn't play it right, but it is something that has to be watched in the future, they will try again.

@Shoe at 1:50 PM: If you think that Antifa's "only goal is to screw with fascists", you clearly didn't watch the video clip included in my article. That's screwing with the rule of law and the constitution, never mind fascism - and it's seeking to polarize and break down social tolerance.

I've fought fascists and neo-Nazis for most of my life, as you'd know if you had read older articles on this blog. I know fascists and their ilk (to the point of actually exchanging gunfire with them), and I know anti-fascists like Antifa. They're two halves of the same coin. Both are intolerant, arrogant fanatics who believe theirs is the Only. True. Way. If you're opposed to their tactics and methods, you are clearly the enemy, even if you don't see yourself that way.

Avoid extremists and fanatics of every shade of opinion. There's never a good outcome to engaging them. Rather, work against them, to stop them taking everything down with them in a frenzy of nihilistic destruction.

Wow. I did not to realize San Jose was that bad. Associated court case still moving forward.

This won't stop till:

Agree 100%:
>Avoid extremists and fanatics of every shade
>of opinion.

I see the occasional post with pictures of buses that have transported these Antifa(communist) groups to the rally(riots). The posts also state these are paid for by professional protest groups in turn paid for with Soros money.

I wonder when someone will start targeting the arriving buses?

4Chan is really the equivalent of weaponized autism or a beehive. They will basically keep to themselves until you poke them too hard. After that it's game on

They picked a fight with people who tracked down Shia LaBoeuf's "He Will Not Divide US" flag two or three times using flight information and the position of the sun.

How did they think this would end?

The lack of investigation on whom is truly behind these organizations is frustrating.

I was shocked to find out the lady killed at Charlottesville was a member of the iww per Salon. Not mentioned in her NY Times obituary. My issue is with the whitewashing of whom she was and makes me wonder what other facts are not being included in a story. Her death was still a tragedy.

Peter - great post and thanks for taking the time to write it.

It'd be fun if the 4ch people could start doing a comparison of faces at the different "protests". See how many of the same faces keep showing up. And yeah the solution here is to follow the money and find someone who will build a case and sue under the RICO statutes or violation of civil rights under color of law.

"4Chan is really the equivalent of weaponized autism or a beehive. They will basically keep to themselves until you poke them too hard. After that it's game on!"

My vote for internet quote of the week!

Can't they both lose?

Shoe said...
interesting comment when discussing people whose only goal is to screw with fascists

the same lie the Communists always use.

to defend the same tactics ( destruction and violence in the streets ) that the Communists always use. this is the way they've done things since the 1800s. how dare you defend yourself against the inevitable forces of scientific History, you Reactionary!

and Communists are the only people more homicidal than National Socialists ( the Fascists weren't actually very much interested in race ).

Peter said...
I've fought fascists and neo-Nazis for most of my life

you spent your life fighting the Socialist Worker's Party which was LESS evil.

Communists murder people by the job lot for a very simple reason: Marx told them to do so.

in the 1848 Manifesto, Marx instructed the Proletariat to help the Bourgeois genocide the Aristocracy ( the very fact that Marx considered this the 'goal' of the Bourgeois gives you insight into just how much of a homicidal lunatic he was: Karl saw EVERYTHING as an excuse for genocide ).

why did Marx advocate that the Proletariat render aid and comfort to the Bourgeois?

because Marx didn't think that the Proletarian war of extinction against the Bourgeois could begin until the Bourgeois had completed their liquidation of the Aristos. so, you see, Marxists have been demanding TWO genocides ever since 1848.

this is why true Communist nations always replicate the same killing fields. they are liquidating the Bourgeois.

just as Karl told them to do.

question: how do you prove that you are NOT Bourgeois, when you live in a Communist state?

answer: you don't. the goal is to procure as many such accusation as the Chekists can garner.

Ray said...
I was shocked to find out the lady killed at Charlottesville was a member of the iww per Salon.

i had already said that i don't particularly care who kills Commies in the streets, we could use more of it.

that's just the cherry on top.

What a bunch of fucking nerds. I'd love to slap all of your giant, oversized heads. Go fuck yourselves you hateful, vile little men.

@Mike Cornelius: If that's your only response, it demonstrates only your own poverty of spirit. Can't you think of any better dialog than violence?

(On the other hand, there are those who are very good indeed at violence, with long experience in the profession of arms. I doubt that many of them are to be found in the ranks of Antifa.)