I don't know what to call this, but it's NOT camping!


I'm a bit mind-boggled to read this.

For a weekend camping trip last month, Chrissy Palmieri and Neil Kapoor packed little more than their hiking boots and a few changes of clothes.

After a 4¹/₂-hour drive to Firelight Camps in Ithaca, NY, with their dog, Bubbles, the couple arrived to a site that included a luxury safari tent, high-thread-count linens, fresh cold-pressed juices, homemade granola, a custom-blend of Nicaraguan coffee, and artisanal s’mores kits.

As experienced campers from western New York, the Clinton Hill-based couple, both 30, are no strangers to roughing it. But for their two nights at Firelight (about $200/night), they wanted to relax in a natural setting without old-school nuisances such as canned beans and sweaty sleeping bags.

Dubbed glamping, or glamorous camping, superluxe stays in the great outdoors are quickly gaining ground as the weekend escape of choice among nature-deficient New Yorkers, who are accustomed to paying for style and convenience. At a booming number of area campsites, city residents with no patience for watching tent-assembly tutorials can now unwind in just-rustic-enough environs with comforts such as preconstructed shelters, memory-foam mattresses, saunas, firewood attendants and farm-to-table dining. 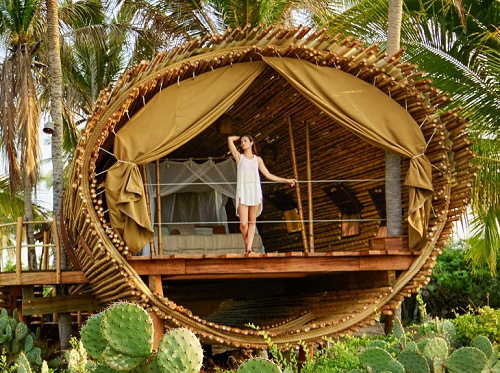 On the rental listings site Glamping Hub, where users can book stays in posh tents and teepees for an average nightly cost of $200 to $500, New York is now the fourth-biggest source of traffic (after outdoorsy California, Oregon and Colorado).

And they call that 'camping'???

Oh, well.  I suppose if you can afford it, you may as well enjoy it.  For myself, thinking back over many years of 'camping' in the African bush, with minimal facilities, and no luxuries except those you carried in on your own back or in the rear of your Land-Rover (if they survived African bush tracks, that is) . . . this has about as much to do with 'camping' as I have to do with the sex life of Polynesian parrots!

Labels: Boys and their toys, Business and Commerce, The Mind Boggles, Weird, Yeah Right!
Email ThisBlogThis!Share to TwitterShare to FacebookShare to Pinterest

Though I agree with you - my baseline is backpacking, my idea of "luxurious" camping was deer camp with my grandfather, with the fishing trips where we could take his pickup camper somewhere between camping and living in a small mobile home.

But something like this would appeal to my wife or our younger daughter, both of whom love hiking but steadfastly resist sleeping accommodations that don't include running water and a flush toilet. Not really competing with old-school camping at all, except maybe as a gateway drug to get you hooked before moving on to the hard stuff.

Hey, if the woods nymph is a stock item, better go for it.

Out Of Africa meets The Great Gatsby: safari with tame lions and toothless bears, sent over from Disney Studios.

They're not harming anyone, but they're also not camping, so whatever floats their boat, as long as they mind their own business about other folks.

Trouble is, these are the same twits that'd ban camping and hunting in places they're too timid and pussified to ever so much as visit.

At that point, it's okay to smear game attractant, honey, and catfish guts on their campsites, and turn Nature loose to make an appearance after sunset.

Sex life of Polynesian parrots...Bwahahaha... I'm so using that line as soon as I can.

Hey don't mock those Polynesian parrots. Any kinky sex practice they see or hear about, they immediately copy.

I know people that consider "camping" a trip in their 35' motor home.

Sounds more luxurious than the Seabees or Army Engineers. Having the tools, skills and access to cutoff and scrap material, they always had the best camps.

What ever happened to the concept of simplicity/simplifying that was the latest craze a year or three ago? Thoreau would be dumbfounded.

You wouldn't want to stagger out half-awake in the morning and fall over the balcony. Too many cacti.

Well the article states that they are (allegedly) "experienced campers" (in the normal, non-catered, sense), but that this time they wanted to "relax in nature" without "...canned beans and sweaty sleeping bags." Now, I don't know if that means that they aren't autocratic leftist morons, (I mean, they are from New York, even if the "western" part) but it (if true) at least suggests that they aren't actually *afraid* of nature. It's still kinda silly, but at least they don't seem to think it's the same thing as *actual* camping...

I've never really understood folks who want to spend precious "not-work" time without hot-showers or toilets, but eh, whatever floats your boat, as long as I can ignore it.

I don't think of this as camping, which I equate with roughing it. However, if the nature they want to relax in isn't being torn asunder by this, then my opinion of it doesn't mean anything. They can spend their money however they like, no matter how foolish I think it is.

When I was younger (and spryer) I did some considerable backpacking.
These days I am content to load up some gear in the Syncro and head for the back roads. The van is comfy and efficient, equipped with 4WD, a queensize bed and a side awning. It is well suited for dry camping in the Nat'l Forests. Not nearly as ostentatious as a giant luxury motorhome but it beats the hell out of trying to set up a tent camp in the rain at night...

Back when I was traveling around outside the US on bidness, I used to tell people that I considered myself to be roughing it when I had to stay at the Hilton because the InterCon or Crowne Plaza was full.

Glamping is LUXO-camping. (Are those tents air-conditioned?)