When President Trump announced he was going to ban the enlistment of transgender persons in the US armed forces, I wrote about the issue from a practical perspective - that of a veteran of military service, and of combat.

Now another military veteran has written about it from his own perspective, in a series of eighteen Tweets that graphically illustrate the reality of combat service.  Here are just a few in the series. 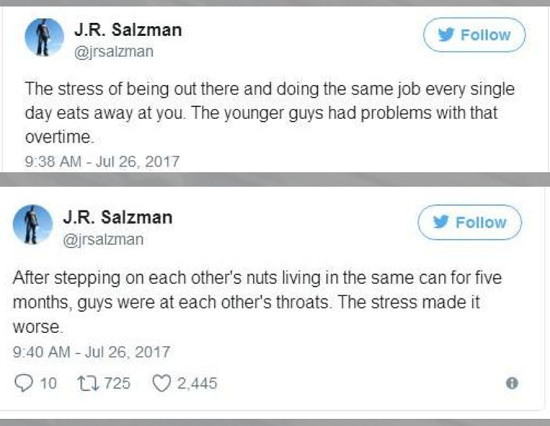 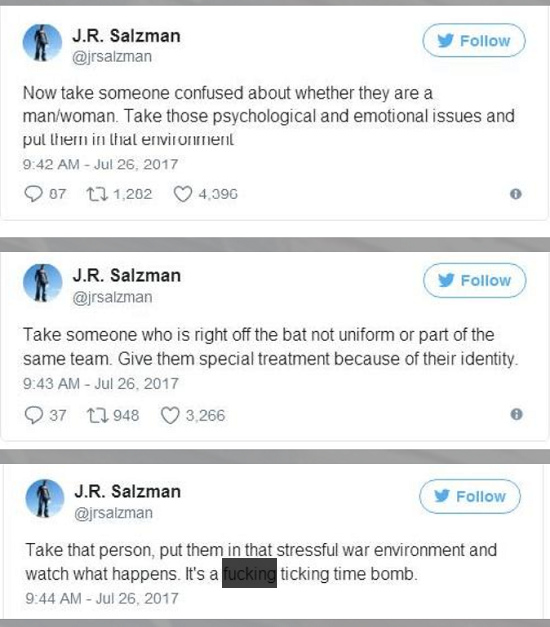 There are many more at the link.  The whole series is highly recommended reading.

From personal experience, I can vouch for the author's accuracy.  Combat service is not a game, and it has no place and no time for political correctness, cultural relativism, gender sensitivity or anything else of that nature.  If you get distracted by such nonsense, either you're going to die, or you're going to make mistakes that kill others in your unit.  In either event, it will be your fault, and no-one else's.

There is no place, space, time or opportunity in combat to worry about transgender issues - and that means they can't be allowed to distract peacetime preparations for combat, either.  That's it.  End of discussion.  That may be hurtful to some individuals, but military service is not about the individual.  It's about the unit, and the larger unit to which the smaller unit belongs, and killing the enemy before he kills us.

It should be intuitively obvious. The people behind this agenda have proven, beyond a shadow of a doubt, that they should have no say in military OR civilian affairs.

I would expand that to queers and women too.

When I think about the fact that this (trans individuals in the military) is even an *issue* that people have to seriously, patiently explain...instead of it being universally understood and dismissed as being patently insane lunacy...*trails off* I just don't even know what to say. *rubs temples*

As I said the last time this came up, before we even get into the whole psychological aspect of this BS, the whole thing founders on the medical/physical question. Transgendered personnel would be inherently medically non-deployable, like a permanent pregnancy or someone with insulin-dependent diabetes.

The military simply cannot guarantee either of the things that would make a transgendered person able to serve--Continuous, uninterrupted access to the ongoing medical care and medications required, or the hygiene necessities. A lot of people don't seem to know or understand just what is entailed with a male-to-female transition--That surgically-created vagina is basically an open wound that wants to heal up and close, and must be continually "exercised" on a daily basis to prevent that from happening. And, when it does happen, it's a damn mess. You could not, in good conscience as a leader, allow someone who had undergone this surgery to deploy to a combat zone, or even an austere deployment environment for an exercise.

Hell, we held people back from going to Iraq due to dental issues in a lot of Reserve and NG units, guys who were still undergoing dental work on the government dime when the unit returned from the deployment, never having left the deployment center until their units demobbed...

On practical issues alone, this is clearly a total non-starter.

Step back for a minute and try to detach yourself from the right now and try put yourself at any other time in human history and view these issues through that lense. It's absolute societal insanity. That people even have to have a conversation about demented depraved lunatics being celebrated and their depravity being held up as something to admire and affirm and to be protected by law. Law which is in the end men with rifles. Not sufficiently keen on sodomy or chixwitdix? They'll send men with rifles to re-educate you. Or the slavering mobs. Either will do.

If a civilization ever deserved to die a terrible gruesome death it is ours. Has another civilisation ever approached this level of degeneracy and evil? Reveled in it and celebrated it? I doubt the Aztecs or Mayans killed as many on their alters as the West does in the abortionists abattoirs. No civilization I can think of ever sent their young women into war unless under the most extreme duress. Even the most backward godless savages knew how to tell the difference between man and woman.

The civilization that produced Bach and Beethoven, the Magna Carta, William Shakespeare, that split the atom, put men on the moon, devised devices which put access to the entire accumulated knowledge of the human race in your pocket, sent space probes to every planet in our solar system and beyond and even unleashed the power that fuels the stars themselves. That it should come to this. It'd be easier to take if some superior enemy invaded and destroyed us but we've done this to ourselves. Committed mass civilizational suicide.

I can guess what would have happened way back when if we had found one of the TG's in our unit when out in the field under combat conditions: they would have become an instant KIA/MIA...

There is no place, space, time or opportunity in combat to worry about transgender issues

The only thing that exists in combat is killing the enemy while not letting him kill you.

Anything else is a fatal distraction, and it applies to everyone involved in the process, both during combat and near-combat periods.