Just to demonstrate how even "photographic" evidence can be so tampered with as to make it the opposite of what actually happened, consider this image from the Charlottesville riots, which I posted in an article a couple of weeks ago. 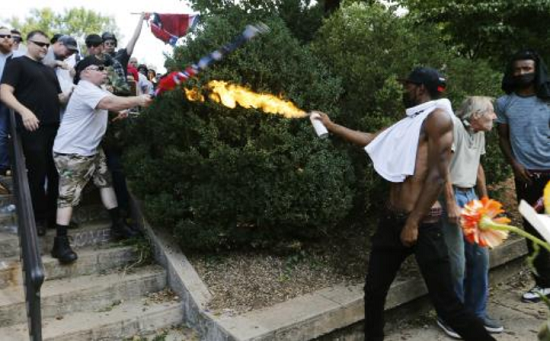 It was taken from a gallery of images provided here (and linked at the time).

This is what it was turned into by a pro-Antifa supporter, using Photoshop or a similar program. Details of how it was altered may be found on this Reddit discussion page.

Now, if you hadn't seen the original, would you have believed a claim that the 'doctored' image above proves that neo-Nazis were using flamethrowers on innocent, non-violent left-wing counter-protesters?  I bet you would have . . . but it would have been a lie from start to finish.  The original photograph, at the head of this article, is the real one, showing the exact opposite.  The moral of the story:  always, always fact-check extremist claims.

As Sarah Hoyt points out, this sort of false propaganda is so widespread in left-wing politics right now, particularly in the mainstream media, that it's beyond ridiculous.

Sure, Trump occasionally misspeaks, and sure people can get bored with a speech.  But more importantly, the press is so relentlessly and insanely biased towards anything Trump says or does that it’s sometimes impossible to figure out what they’re reporting on, other than whatever is inside their heads, pre-packaged and ready to “report.”  From offhand comments on Russia, to his comments on what happened in Charlottesville, it’s near impossible to divine what Trump says from how it’s written about.  He could say the sky is blue and get coverage along the lines of “by not mentioning the white clouds, Trump encourages white supremacy.”

You’d think that Trump’s victory, so stunning that it surprised even those of us who wanted anything but to see Hillary win, would have caused a media wake up, something along the lines of “wait, if this could happen, maybe things aren’t the way we expected” or “maybe there is a defect in our thought.”  Or perhaps even “technology has made it so that we can no longer present a unified front in news, without people being able to see and judge for themselves.”

However,  that is not what seems to have happened ... It’s like the media has been in an enchanted sleep, as though a particularly ugly Snow White had fallen asleep under a spell and failed to note how the world changed around her as she slept.

And yet instead of reassessing, they just keep trying more of the same, or, by wildly projecting, saying that Trump supporters might harm them, this while deep-sixing coverage of the attack on Scalise by an anti-trump leftist because it doesn’t fit their narrative.

It’s as though they think if they only attack with enough force and vigor they’ll get the result they always got.

Like lab mice in a long deserted lab, they keep pushing with their noses on the pellet dispenser, sure eventually it will dispense just what they want. Only they’re not as smart as lab rats.  Lab rats adapt and learn.  The biased press can only do the same thing over and over again, until all you can think of while watching them is: How long before they starve or starting eating their fellows?

Food for thought . . . and a worthwhile reminder to be on our guard.  What you see isn't always what you get, and "all the news that's fit to print" isn't always the truth, let alone real news.

I'd like to see how that could really be done in Photoshop.

No, I'm not doubting you or the refutation on Reddit.

Where I'm coming from is as a photographer. I started playing with cameras in the 1960s, and got a 35mm SLR as soon as I had an income in the mid-70s. I used to have Photoshop but as an old guy (= old school), I try to take pictures that need as little screwing with as possible. Consequently, I crop a bit, use level stretching regularly, and maybe go as exotic as unsharp masking.

I have no idea how to do something like that in any photo editor. For 30 years, or more, I've been reading "the day is coming where pictures are not going to be admissible as evidence" and "you'll never be able to trust video you're shown". I'd like to know how it's done.

When I look at the "evidence" the one guy posted that showed it was completely edited, how do I know that isn't the fakery? If I know nothing (check), how do I know all his red lines on the picture reflect something that was done to fake it and not something he did?

Yep, it HAS gotten to the point that you can't trust ANY pictures or video... sigh

Interesting to note, on the photoshopped image, the hand holding the spray can has its thumb on the wrong side of the can. Also note the color is not the same as his arm.

Sci Fi book, Eclipse by John Shirley, part of the cyberpunk era. Manipulated Video was used as evidence by White Sepremacist US government, the resistance created a program to show manipulation.

Interesting how I see the book now, verses then. Now I see any book or movie with the idea of White Supremacists taking power in the US as propaganda / messge fiction / biased / politically correct.

I largely avoid the mainstream media because of stuff like this. It's like being trolled by children. STUPID children.

I don't worry about free speech and neither should you! The fact is I can read the most biased liberal rag sheet - like the New York Times, for example - and spot the lies. I can read between the lines. I can tell the way of it from what they DON'T say. Those leftist arse hats couldn't tell a decent fib if their lives depended on it.

In the real world if that fella wanted the black man dead he would have shot him and have been done with it. In the real world, blacks attack whites and other blacks like that, and that is because they are genetically prone to inferior intellect and violence. I'm sorry, I don't like it either, but there's no nice way to say it.

Were it up to me I would make street protest illegal because it doesn't accomplish anything except give stupid people a place to brawl.

Something like this is a piece of cake in Photoshop. Takes maybe five minutes.

I wonder how many people are missing the point with an article like this.

The audience just wants the crap to stop so they can get back to thier sitcom.

The right argues to the audience that they should support him because of fact a,b,c and d.

The left doesnt argue that the audience should support him because of facts. Rather they cause the audience to not believe any information, factual or not. Since the audience doesnt really care about facts (they just want it stopped) the left wins by defualt because the rights arguements have been rendered ineffectual.

1. The hand is wrong. 2. The arm position is strange for the rest of the posture. 3. The "spray can" is too large. I have not seen any spray can of that size. 4. lack of label on can. 5. The "can holder" is a lot crisper than the other figures around him, as if he's been touched up.

I'm not an image-manipulation specialist. However, I remember back when {blog that can't be named} exposed Reuters for doctoring photos, or accepting badly doctored photos, from pro-Palestinian activists, and learning as several bloggers walked us readers step by step through what had been done and how (over-use of the Clone tool was one. Iran's FARS media loves the Clone tool.) And I used to haunt the Photoshop Disasters web-page, and learned a lot there.

In the second picture, look at the guy holding the can. He's using his right arm but the thumb is on the wrong side of his hand.

Depending on your skill level in Photoshop, this hamfisted manipulation could be done fairly quickly.

The level of computing power and the software used for photo and video editing has reached the point where NOTHING YOU SEE in any image from any source anywhere on TV or the internet can be counted on to be real. It's just that simple. Given just a few minutes and access to the RAW image data allows a talented editor on a high end machine the opportunity to make ANY image tell whatever story they wish. And this has nothing to do with left vs right.....BOTH sides have access to the same powers and thus both sides will be using said techniques for propaganda. The VR world is rapidly overtaking reality. If you didn't see it yourself you can't count on it being true. And as image projection techniques improve it won't be long before you won't even be able to count on what you see with your own eyes to be true.

Sigh...I guess everybody here is more interested in the technical details of photoshopping than the significance of what it causes.