My thanks to several readers who sent me the link to a tweeted picture from Ken Webster Jr.  Here's a reduced-size version of it, and of a comparison image from the same thread.  Click each image for a larger view.  They show Interstate 10 near Winnie, Texas, between Houston and Beaumont, near the location shown by the red icon on the map. 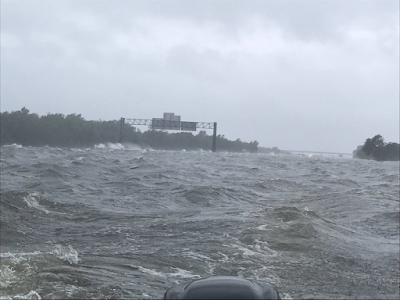 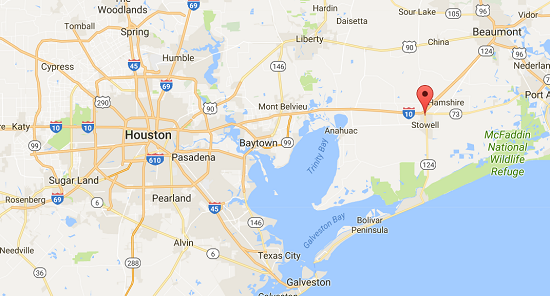 I know that road very well.  I traveled it many times when I lived and worked in Louisiana, between 1997 and 2009.  Looking at that water . . . it's mind-boggling.  That's not just standing flood water.  Those are waves, like one would expect to find offshore!  It looks as if the whole of the McFaddin National Wildlife Refuge is under water.  There won't be much wildlife left there by now . . .

The remnants of Hurricane Harvey have now come ashore once again on the Texas-Louisiana border, and are expected to track north-east across the state into Mississippi and Tennessee over the next couple of days.  Alexandria/Pineville, where I used to live and work, appears to be right in the path of the storm, and they're expecting heavy rain there over the next couple of days.

Prayers for all concerned.

My heart and money goes out to the victims of Hurricane Harvey.

Hello Peter, I interview authors; you have captured my attention and I’d love to interview you.

I interview authors via email or phone (your choice) of published book(s); drop me a line and let’s talk at ab3ring@juno.com or dalanbinder@gmail.com. It is only about 17 questions or so long.

My website is located at the following place;
https://sites.google.com/site/dalanbinder OR www.davidalanbinder.com

I look forward to hearing from you. It is a simple; I email you questions and you return them with the answers. I do make a few exceptions and may phone interview if agreed to by both of us.

Here is a sample of an interview with Craig Johnson author of Longmire, books plus the A&E Network and Netflix series recently published to my website:
https://sites.google.com/site/dalanbinder/blog/0606-294post-craigjohnsoninterviewwithdavidalanbinder

Let's talk. “After all, if we are not here to help each other, then what are we here for?”
David Alan Binder
P.S. The fine print: By filling out the interview questions, you agree to the publishing of the interview on my website.
Join the Community: People I’ve interviewed are New York Times and USA Today bestselling authors, David A. Adler author of 250 books, Dandi Mackall author of 450 books (one is a Hallmark movie-My Boyfriend’s Dogs), UCLA Professor of screenwriting - Richard Walter, Bill Crider author of mystery fiction, Craig Johnson for the series Longmire, Robin Burcell, Barry Lancet (Japantown, was optioned by J. J. Abrams), Craig Dirgo and Boyd Morrison (all THREE are coauthors of different books with Clive Cussler), Robert Gatewood, authors of Children’s books, thrillers, poetry, historical novels, romance, non-fiction, self-publishers and those with over 20 famous publishing houses, an 11 year old author, Father Goose, Don Knotts’ brother-in-law, editors, two authors that have a TV special for Hallmark and Teachers, PHD’s, Lawyers, Doctors, Educators, and Professors, Self-Help gurus, writers for articles, journals, magazines and technical writers, all sorts and types of award winners, a singer, plus authors in (10 countries) Japan, England, Wales, Canada, India, Scotland, Ecuador, Spain, Australia and (43 states) USA. Over 240 authors of collectively almost 4000 books!

Yep, prayers... And the only thing left down there are the snakes and the gators!

Our local kayak outfitter (A-Day-Away Outfitters, Titusville, Fla) loaded up 7 of their guides and 55 kayaks last Monday and headed west to help with the rescue efforts. Word from the Cajun Navy guys was that outboard motor boats were having a rough time getting to people due to all of the debris and unseen obstacles in the water and they were asking for non-motorized boats or air-boats to come help. A couple of our local air-boat ride companies were also loading up some of their large 20 person tour air-boats to send out to help the effort.
As of last night the kayakers were struggling to find a route to get down into Beaumont, Tx due to all of the roads being flooded. They had to detour way up to the north and then go south. Many times they have had to walk ahead of the vans and trailers to locate the road and check water depth.
Craig

My oldest daughter lives about a mile toward Beaumont from where that photo was made. Luckily, she was smart enough to buy a house built with this sort of thing in mind. No flooding and the house is a dome designed to withstand a cat 4 hurricane. She told me she had to use the boat I bought her, though, to get in and out. You might consider your own situation as you are in tornado alley. https://en.wikipedia.org/wiki/1979_Red_River_Valley_tornado_outbreak