A tip o' the hat to an anonymous reader for forwarding the link to today's award, which goes to a couple in Florida.

A Florida couple transporting a propane barbecue grill inside their SUV was injured Sunday after a woman lit a cigarette, sparking an explosion.

The grill was turned on and the propane tank was open in the back of the red Kia Sorento when the couple left a barbecue at the Central Florida Fairgrounds, Orlando police Lt. Cindy Lane told the Orlando Sentinel. 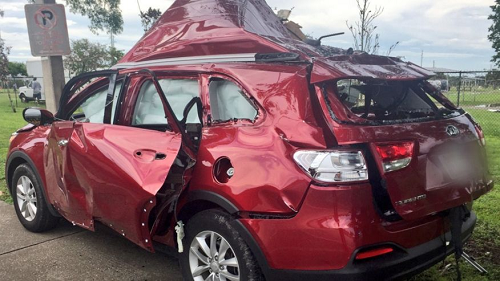 After the explosion, the vehicle kept traveling until it crashed into a pole, according to Lane.

Let's see . . . roof ripped open and blown upward . . . windscreen blown out . . . I'd say they're lucky to be alive!  Why the hell didn't someone check to see that the gas was both switched off, and disconnected, before they loaded the grill?

A fine reason for giving up your smoking habit.

Smokers have a deficiency in their sense of taste and smell. This may have been a factor in expediting their idiocy.

"Mayhem" may have been involved.

This happened a lot in the UK with the "yoof" sniffing butane or petrol (gasoline) in vehicles. They would steal a car, steal a can of butane and sniff the gas to get high.

If one of them lit up, then the car was wrecked but if they happened to be breathing in when the butane burned, then the flame would cook their lungs from the inside out and their skin would be would be severely burned. They usually died as the burned lungs filled with fluid and could not absorb oxygen through the burned areas.

Sort of Darwinian selection but with a modern, technological twist.

Very possible the valve got jogged when loading??
Unfortunate!
...and the over pressure damage is impressively epic!! Really, what shape are they in? Permanent hearing loss?
BTW: I was initially mistaken too by that pic of the REAR hatch window laying on street. BACK glass- note the attached single wiper arm.

Best guess is the passenger supplied the ignition source, judging by the greatly expanded roof over that location. I'm wondering if the windshield is still mounted? For many years now, they have been glued in with a hard setting epoxy, and are used as part of the stiffening of the cabin structure.
Prior to that, they were rubber mounted in most cases, and could be kicked out from the inside, or rather pushed out, if you started from the right spots. Soft glues started to be used in the early 80's, IIRC.

Essentially, what Carteach noted earlier - only...embrace the Power Of Both...

BTW - my first thoughts were, when I read the post, and especially when I closely-examined the "after-action" picture of that Kia SUV: "My, I should imagine THAT made some serious noise!...What an inefficient way to go about removing all the glasswork in that vehicle...Must've made a VERY impressive fireball, too!..."