The Atlantic has a very thought-provoking essay that suggests they may be.

The more I pored over yearly surveys of teen attitudes and behaviors, and the more I talked with young people like Athena, the clearer it became that theirs is a generation shaped by the smartphone and by the concomitant rise of social media. I call them iGen. Born between 1995 and 2012, members of this generation are growing up with smartphones, have an Instagram account before they start high school, and do not remember a time before the internet. The Millennials grew up with the web as well, but it wasn’t ever-present in their lives, at hand at all times, day and night. iGen’s oldest members were early adolescents when the iPhone was introduced, in 2007, and high-school students when the iPad entered the scene, in 2010. A 2017 survey of more than 5,000 American teens found that three out of four owned an iPhone.

The advent of the smartphone and its cousin the tablet was followed quickly by hand-wringing about the deleterious effects of “screen time.” But the impact of these devices has not been fully appreciated, and goes far beyond the usual concerns about curtailed attention spans. The arrival of the smartphone has radically changed every aspect of teenagers’ lives, from the nature of their social interactions to their mental health. These changes have affected young people in every corner of the nation and in every type of household. The trends appear among teens poor and rich; of every ethnic background; in cities, suburbs, and small towns. Where there are cell towers, there are teens living their lives on their smartphone.

Psychologically ... they are more vulnerable than Millennials were: Rates of teen depression and suicide have skyrocketed since 2011. It’s not an exaggeration to describe iGen as being on the brink of the worst mental-health crisis in decades. Much of this deterioration can be traced to their phones.

Even when a seismic event—a war, a technological leap, a free concert in the mud—plays an outsize role in shaping a group of young people, no single factor ever defines a generation. Parenting styles continue to change, as do school curricula and culture, and these things matter. But the twin rise of the smartphone and social media has caused an earthquake of a magnitude we’ve not seen in a very long time, if ever. There is compelling evidence that the devices we’ve placed in young people’s hands are having profound effects on their lives—and making them seriously unhappy.

The author, Prof. Twenge, has also written a book on the subject, going into greater detail. 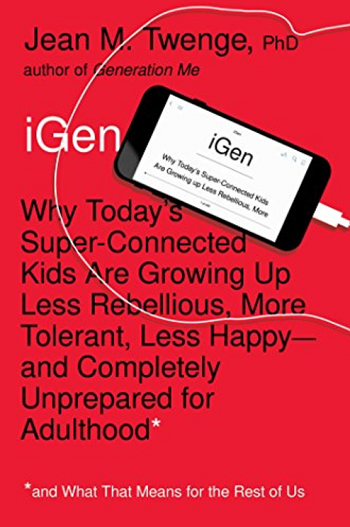 I hadn't noticed this teenage preoccupation, apart from observing that when they walk around, all too often it's with their heads bowed over a smartphone - causing them to walk out into the street without checking for oncoming traffic, leading to some pretty hair-raising near-misses.  However, the author of the essay thinks the problem goes much deeper than that, affecting self-image, relationships, and the whole process of growing up (possibly very negatively).  I suppose the jury's still out on whether or not she's right, but she advances some pretty persuasive evidence for her argument.

Food for thought . . . particularly if you're the parent of a teenager.  Is it time to confiscate their smartphones, and/or forbid them from getting or using one except during strictly limited hours of the day?  Is that even possible any more?

And for slightly younger kids, a major nuisance:

Some 62.5 per cent of youngsters with [smartphones or tablets] will experience head lice within a five-year period compared to just 29.5 per cent of children who are less technologically savvy, a study found.

One explanation could be that the pests easily spread when children gather together to look at a screen, according to the researchers.

Yet, taking selfies is not associated with an increased risk of head lice, the research adds.

The other problem is kids no longer actually KNOW how to have human interactions... sigh

Online is the only place a teenager today can get any independence. Their days are pre-planned and pre-booked by some adult who controls their every move. And these kids have never been afforded any opportunity to make their own decision or get themselves out of some minor trouble. They've been coddled by adults who won't leave them alone.

so they retreat into the only place they can have a little freedom.

As a mid-term Boomer, parental control of what I got involved in was very minimal. Once out of school, I only had to be home for supper. Of course, most all parents kept an eye on kids within their view, but we often were out in the literal woods, playing in the creek, or just having adventures in the fringes of suburbia. Also, they had no problem correcting poor behavior in any kid within reach. And then the parents would reinforce it, after being informed by the other adults.

You could get a part time job at nearly any age if you wanted, and could handle it, but that started to be restricted by the mid to late 60's.
We walked or biked to school, from about age 7 or so. This was in three states, scattered across the nation. Nowadays, they jail parents who aren't home when the kids are delivered there. Things have changed, and certainly not for the better.

The really nasty side of me says to let them all self-destruct and suicide. The universe is better off without them.

There's a name for people whose attention is strongly focused on irrelevant things: Targets.

Which conjures up images of high casualty rates during conflict, which is correct, but it also applies to what's been termed "eyeballs" in reference to attraction to money-earning media.

It appears both apply to the <30, and neither is a positive occurrence.

I agree with the article 100% I have two teens, one an autistic individual who really doesn't play into this. My daughter - another story. If she isn't on the smart phone, she is on the internet. Phone use is constantly in contact with her friends.

Personal relationships, especially dating is difficult. All couples have problems but phones give instant contact with others at the touch of a button. A relationship that has a fight is almost required to break-up because of their 'friends' jumping in on one side or the other, causing ripple effects of 'I can't believe you are with him / her'. Pretty silly if you ask me. A whole lot of drama for sure.

Another technological advance that is ruining kids and interpersonal relationships? Sounds just like the internet. And the landline telephone. And TV. And the radio.

In reality, kids growing up have always been subject to peer pressure and the drama associated with communicating (or not) with their social groups. Smartphones are just another medium for that. Every time a major innovation comes around, whether a device, a technology, or even cultural fad, there are people who proclaim that it will be the death of kids.

Devices don't ruin kids. People do that - their parents, their peers, and not least, themselves. Blaming the smartphone for kids screwing up their relationships makes no more sense than blaming guns for violence.

That said, I don't plan on buying my daughter a phone for a good long time, not because I think the phone itself is a problem, but because I want to be sure she's mature enough to use it properly before I give her one.

Teenagers have an impressive ability to screw up their lives with whatever tools happen to be available. It's possible that smartphones make it easier, but don't underestimate the kids' innate abilities.

The use of Arabic numerals ruined young people by making calculation so easy that any idiot could do it.

And don't even get me started on the evils brought by the discovery of fire!

Don't forget the helicopter parent aspect of this.

I am currently in a bit of a battle with my husband not getting my 14-year-old daughter a cell phone. I don't want to get her one. She doesn't want one. He's worried that she doesn't have the ability to contact us via phone when she needs to.

It is not as if they are pay phones left anywhere anymore.