No, Starbucks, that's not true for anyone, not even you


I note that Starbucks, as part of its drive towards political correctness, has put out a training workbook for its staff (link is to an Adobe Acrobat document in .PDF format).  It includes this drivel (click the image for a larger view): 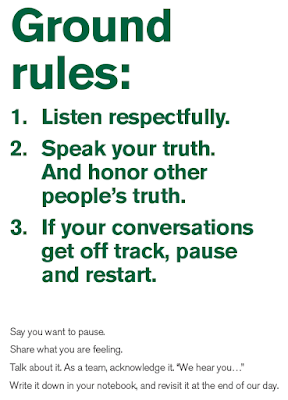 There is no such thing as "your" truth or "other people's" truth.  There is only TRUTH, and that word has meaning.  Here are a couple of definitions:

If something is not in accordance with the facts, or with reality, and so on, it may be opinion, or belief (including religious belief, which typically cannot be tested against empirical evidence), or philosophy, or whatever - but it cannot be labeled as TRUTH in any objective sense.  Objectivity requires that something's truth should be testable against reality, and only accepted as true if it conforms to reality - not one's opinion of what should, or should not, be real!

If Starbucks is trying to teach its staff that reality can be ignored in favor of politically correct waffle, it's no wonder the chain is running headlong into problems in the marketplace.  The market is real, in the sense that people vote with their dollars.  When they find that their dollar doesn't buy them as much as they want from a particular company or industry, they'll do their best to find it somewhere else.  Starbucks has chosen to cater to people for whom dollars are not the primary currency of conversation or belief . . . so it need not be surprised that its dollar sales suffer as a result.

As for "what you are feeling", if that doesn't conform to reality as well, then your feelings aren't true or truthful.  Ask anyone who's had to listen to a battered woman argue that her abusive husband or partner "really loves her", and she wants to go back to him because she knows "he didn't mean to hurt her" - this after her fourteenth visit to the emergency room with bruises, cuts and broken bones.  Yeah, right.  Feelings have their place, but they are irrelevant when it comes to facts, and in business they count for nothing in the bottom line.  If the bottom line is anything but factual, that business will close its doors.

Amazing how feeling are weaponized to win arguments and shame, with no regards to facts.

Origins debacle with Larry C. Is a great example.

and therein is the real problem with post-modernism or whatever damn fool name you want to call it... Feelings trump facts when designing regulations around perceived slights. however, Perception doesn't change the law

With "your truth & my truth" we see the big lie in action!

Bu-but what if this "objective reality" stuff doesn't make me as happy as I want to be? I mean what have we got government for?

Teaching this during the Second Grade is when this concept would have the greatest positive educational effect. [IOW 'It doesn't take a third grade IQ...'as my philosopher uncle 'Uncle Danny' would say]

At least Starbucks has shown us what an up-to-date, woke rewrite of John 18:38 would look like.

Didn't Babylon 5 make a point about this? About how truth is a three-edged sword?

There is not truth. Only Zuul.

Starbucks, Starbucks. I keep hearing Starbucks; what is a Starbucks, anyway? I understand it's really expensive, so I guess it's the latest Kawasaki.

As for your truth vs. reality, see gravity.

Another thing, while I'm thinking about this: no employee of a business, not even at Starbucks, is there to have a conversation with me and express " their truth. " That employee is there to make sure I get, in a timely manner, whatever the business offers. I may decide to start a conversation, but I need to remember not to steal from the business owner by wasting the employee's time. The employee needs to remember it isn't their place to change my view on company time.

Starbucks evidently believes their mission is to save the world, not to sell coffee. The market will make a decision about that, and rightly so.