A surprisingly good meal in a Texas backwater


While on the way to San Angelo today, Miss D. and I decided to stop for lunch at the town of Munday, Texas.  We had no idea whether there were any restaurants or cafes there worth patronizing;  we simply felt hungry, and decided to take a chance.  While driving slowly down the main street, Miss D. spotted the Farmhouse Grill, and we pulled over. 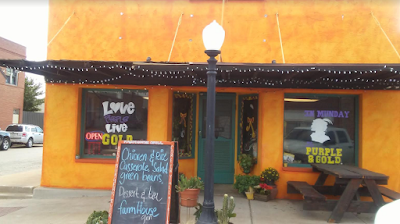 It was a good thing we did.  Their food was absolutely delicious, served in immense portions that neither of us could finish.  Miss D. had something called a "Mogul Burger", which appears to be named for the local high school football team.  It came with everything but the kitchen sink!  I had a mushroom and Swiss cheese burger, which was very tasty indeed.  Both were served with fries that I'm sure were cut right there in the restaurant, and fried their way - nothing mass-produced about them at all.  Those of you who've had fish-and-chips in England will recognize their size, texture and flavor at once.  I wished I had some malt vinegar to sprinkle over them.  The flavor was already excellent, but that would have added a familiar touch.  Whatever - they were superb, and I really enjoyed them.

It just goes to show:  small towns can have surprisingly good restaurants and eateries.  They may not look like much on the outside, but their food rewards the enterprising passerby.  The Farmhouse Grill is such a restaurant, and Miss D. and I will certainly be return customers if we pass that way again.  For my Texas readers (and others) who may find themselves in the area:  this one's a winner.  Give it a try.  (No, they aren't providing any compensation for writing this, and we paid for our meal.  We just like to give a boost to places that deserve it.)

We're overnighting in San Angelo, where we had supper at a Thai restaurant called What Da Pho, because the name made us laugh.  The food was good, but not outstanding.  We found little or no trace of Thai staples like fresh basil, star anise or lemongrass, which surprised us.  However, there was a lot of cilantro, which Miss D. enjoys, to make up for it.  (I ordered my pad thai without cilantro - to me, it tastes like soap.)

Tomorrow, we're going to visit the Fort Concho Museum, then turn north to learn more about the Llano Estacado.

Pho is a signature Vietnamese dish.

I think well of Windmill City Cafe, across the street from the Courthouse in Sterling City.
The traditional favorite in San Angelo is Zentner's Daughter, a family owned steakhouse of some repute.

I grew up on the llano. Drive around Idalou, Ralls, Crosbyton, Heckville, Abernathy, Petersburg to see some of my old stomping grounds. When coming up from Post, towards Lubbock, that is the Caprock. Just a little climb, then flat-as-a-table land. That extends all the way west to a bit east of Roswell, NM. I really love that spot out there. On a clear night, the stars go from horizon to horizon. Nothing sneaks up on you... You can almost see tomorrow if you stand on tip toe....

I really did like Holly's Burgers on the south side of Post, TX. Greasy cheese burgers and great fries. Onion rings were amazing. Just a tasty reminder of old burger joints from my youth.... Nice folks, too.

They even had a game room in the back.

Any chance you can add it to OpenStreetMap?
I think its located here: https://www.openstreetmap.org/way/629888306

Consumers of OpenStreetMap data can be found here, here, and here.


@Jason Maskell -- Pho is served in any SE Asian restaurant I've ever been to. A local eatery called "Thai This" has pho and several types of curry, as well as pad thai, pad si-euw, etc. Given how there's always "cultural appropriation" going on across borders, I don't think pho is exclusively Vietnamese anymore and probably hasn't been for a very long time.