Today's award goes to the Bruce Rock Police Force in Australia.  A tip o' the hat to reader Snoggeramus for sending me the link.

Police officers in Western Australia have been mocked after they posted a picture online showing off huge bags of marijuana they "seized", but people were quick to point out a glaring issue.

"Can I send you my address? I have some garden clippings I need to get rid of and I can't be bothered fetching the green bin," one user wrote.

"Putting Jim's mowing out of business if you keep this up," another said.

One added: "This is the dumbest thing on the whole internet. This is embarrassing for Australia."

Others suggested that the bags were just filled with the unwanted left overs from product that they either already sold or moved.

"Police have estimated the value of the haul in excess of seven dollars fifty," one person said.

Yes, looking at the photograph the cops posted, it's fairly obvious that isn't marijuana: 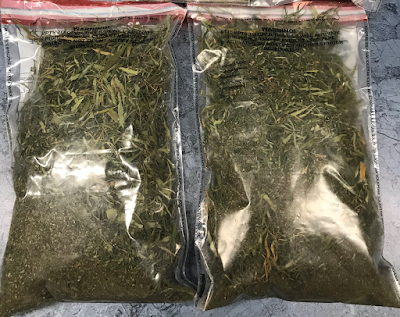 Either a cop didn't know what he was looking at, or some drug pusher figured he had really stupid clients, who wouldn't recognize that he wasn't selling them what he promised.  Either way, I'd like to see any court convict anyone on a narcotics charge for selling those clippings!  Maybe they could get them for fraudulent misrepresentation?

... some drug pusher figured he had really stupid clients, who wouldn't recognize that he wasn't selling them what he promised.

You know, if he said he was going to sell them grass, the dealer couldn't even be nailed for fraud.

I've occasionally wondered about crushing Altoids with mortar and pestle...

This happened once upon a time in Durban South Africa. Some undercover drug cops told their waiter (we could still call them that, back then)at a drive-in restaurant (the kind where they clipped the serving trays onto your car window)that they wanted to buy some grass.
Having sussed them out the waiter went out back of the kitchen and gathered them some of Durban's finest lawn grass.
The cops, realising that they had been had, tried to bust him for fraud. It made a big splash in the daily newspaper and the magistrate threw the case out as a non-starter.

From the Jim Croce song - "Friday nite, feelin' right, head out on the street. Standin' on the corner, was a dealer known as Pete. Said he had an ounce that was super-fine, dyn-amite from Mexico. Spent Saturday night, tryin' to get right on an Ounce of Oregino. And you think you seen trouble...."