Today's award goes to the idiot(s) who thought up this product.

The San Mateo County Deputy Sheriff's Association posted the photo Monday of a cell phone case very much resembling a gun in someone's back pocket. 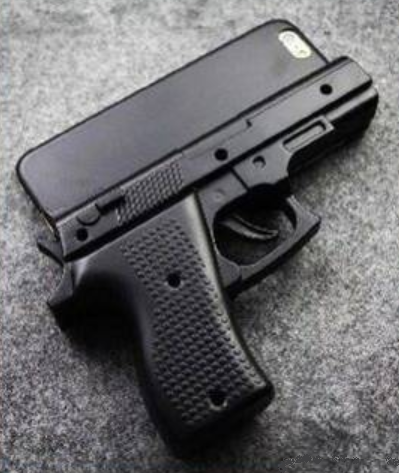 "Although a novelty, it will create unwanted scrutiny from law enforcement or whoever uses it," authorities said.

"Regular citizens will see it and call 911, and then law enforcement will respond accordingly for a subject with a gun call," authorities added.

Officials went on to say "someone could potentially get shot depending on their actions when LEOs (law enforcement officers) respond."


There's more at the link, including a picture of it in someone's back pocket.  It does look exactly like a gun - there's no sign of a cellphone at all, to a casual glance.

Who would be dumb enough to think of a design like this?  I can tell you right now that almost every cop of my acquaintance (and I've worked with a lot of them) would be ready for trouble as soon as he saw it.  He might not draw his gun at first, but if he saw you pull that out of your pocket with no visible reason to do so - before he noticed the cellphone attached to it - he might not wait to ask you politely what you were doing.  Action beats reaction, and he's not going to wait until someone aims what looks just like a gun at him.

Nor is the danger limited to this country.  Imagine how it would go down in, say, a European city that's had nasty experiences with fundamentalist terrorists.  They can be trigger-happy over there.  In Britain, for example, just ask Harry Stanley or Jean Charles de Menezes - although you'll need a seance to do so, because they were shot dead by police who thought (wrongly) that they posed a threat.  Would you like your name to be remembered along with theirs?  Carrying that cellphone case in England might do it.

Don't buy this cellphone case.  If someone gives it to you, don't use it - and don't return it for a refund, either, because someone else might buy it and become a victim.  Destroy it, and throw away the remains.  That's the only safe thing to do with it.

Labels: Boys and their toys, Danger, Doofus, Dumbass, Police, The Mind Boggles
Email ThisBlogThis!Share to TwitterShare to FacebookShare to Pinterest

Not a good idea at all.

To be fair to the Police Officer in the case of Jean Charles De Menezes, he wasn't trigger happy, he actually did his job.

If your boss is such a useless incompetent that she yells "Stop Him," to an armed Police Officer, who is within sight of a target who has jumped a ticket barrier and is running for an underground train, what does she think he is going to do? Employ mildly harsh language?

She even got promoted.

I forecast that the first call for one of these idiotic things will be at a nighttime party, where some wannabe gangster will be wandering around with it in his pocket. Hilarity will not ensue.


"Man with a gun" calls are considered high risk responses. As a result, they have the slowest response time of all priority calls, as they gather a large group of officers to swarm the target(s). If you want a cop right now(!), don't make this the complaint when you call. In Silicon Valley, this will be at least a 20 minute response.


I got swept up in a "SWATing attempt" done with a "man with a gun" call. The target still doesn't believe how close he came to dying.

From what I recall of the De-Menezes case there was a surveillance operation on a terrorist suspect who lived in the same building. De-Menezes bore a passing resemblance to the subject of the operation and when he left the through the door they were watching, they followed him instead, and things were ready to go horribly wrong from that point onwards.

I can't think how having a phone case like this is a good idea anywhere at any time.

I speak as a retired Police Officer with 28 years of experience on some very dangerous streets. If I I'd seen THAT thing in someone's pants, my weapon would have been in my hand bfore I made any move whatsoever. And, yes, my finger would have been very, very close to stroking the trigger.

I think it's a qualification test for the Darwin awards.

I immediately thought of Irwin Mainway: