Another interesting military application for drones


Last year, I wrote about the early days of mine detecting vehicles in Rhodesia and South Africa, of which I had a certain amount of personal experience.  They progressed from looking for metallic land mines, to using ground-penetrating radar to look for the holes dug to take them (which allowed them to look for plastic or wood mines as well).

Most civilized nations ban the use of landmines because they kill indiscriminately, and for years after they are planted. However, they are still used in many places around the world, and people are still left trying to find better ways to find and remove them. This group is looking at an interesting new approach: using ground-penetrating radar from a drone [PDF link]. 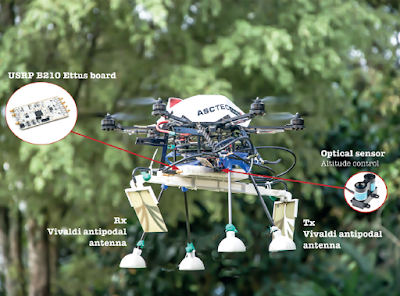 The idea is that you send out a radio signal, which penetrates into the ground and bounces off any objects in there. By analyzing the reflected signal, so the theory goes, you can see objects underground. Of course, it gets a bit more complicated than that (especially when signals get reflected by the surface and other objects), but it’s a well-established technique even though this is the first time we’ve seen it mounted on a drone. It’s a great idea: the drone allows you to have the transmitting and receiving antennas separated with both mounted on pole extensions, meaning that the radio platform can move. Combined with a pre-planned flight, and we’re looking at a system that can fly over an area, scan what is under the ground, and store the data for analysis.

The trials on the device look promising: the team was able to detect several metal objects in a number of different soil types.


There's more at the link, and at the linked report (although that's much more technical).  Very interesting reading.

This is potentially very useful indeed.  Such drones can be carried by almost every vehicle in a convoy, if necessary, as their low cost will make them essentially a convenient spare part.  They can inspect, not just the road surface, but the shoulders of the road, pull-off points, parking and rest areas, and so on.  They can be far more effective than a surface-vehicle-mounted detection system, which can only detect objects over or near which it drives (to possibly detrimental effect if it sets them off).  Being airborne, they are much less subject to the risk of explosion - although an inevitable countermeasure is likely to involve setting up extended tilt fuses using the thinnest, lightest materials possible, in an effort to blow up a drone as it passes over a mine.  I've already seen some that used a transparent drinking straw filled with typical local surface dirt, which was very difficult to see in time to avoid it while driving at speed over an unpaved road.  I daresay a higher-tech solution will be along shortly.

In my days in uniform, we'd probably have done just about anything, up to and including assault and maiming, to get our hands on something like this.  I'm sure US forces in Afghanistan and other operational areas will do the same today.  Kudos to the experimenters.  Now, how soon can this be perfected and put into operation?

But we were all assured by some commenter that hobby-class drones won't ever be useful in carrying payloads or...

Yes. This is a good use of drones. More, please. Should be useful especially in areas where the weeds have overgrown old fields. Now add a drop feature to drop a flag or a paint-ball marker to, well, mark the spot.

I can see a use for search and rescue, and also for searching for graves. Should be a big aid in archeology, too (but, unfortunately, a boon for grave robbers and their ilk, too, because people are butt-heads.)

Hmmm, wonder if the Israelis already have a military tunnel-finding drone...

A. That is not a hobby drone. Just looking at it I'd say that beast is running in the neighbourhood of $7~8k

B. Look up it's payload specs - if it has any. That one MIGHT just barely lift a grenade.


And of course, if the old women carping about hobby drones had any sense, they might ask themselves why Uncle Sam is spending billions on his drone programs when all he really needs is stinky, illiterate rag heads and some cheap DJI Phantom drones. Where is Aesop in all this? Maybe he needs to convene a meeting of the Joint Chiefs and explain to them how they've been approaching drone warfare all wrong! HAR HAR HAR! Give 'em hell, Aesop!


I may as well render a scholarly opinion, seeing as how the hysterical old geezers here won't: just looking at it I would be VERY suspicious of it. I can see a lot of weak spots in this approach given the technologies involved.

I've been waiting for this for quite awhile; knew it was coming, just didn't know when it would be first implemented.

My best guess on this first-generation version is that it won't work perfectly, but that it will work well enough to encourage development. Follow-on designs will be better.

I'm thinking that they'll be putting little dispensers on these for shaped-charge penetrators like EOD uses to disrupt charges, and that the charges will be controllable for tactical use; place the charges, wait until the armor bubbas are ready, and Hey! Presto!, you have a breach lane. Much better than that brute-force line charge approach.

And, of course, the counter-measure war will inevitably begin, with anti-drone protections for the minefields, ELINT work to take over control of the drones and disruption charges, ad infinitum.

What's funny is that this is basically the approach the Wehrmacht took on the eastern front; train everyone to be anti-mine experts, and then operate as though the mines weren't there. Kinda worked, with trained troops.

The next few generations of warfare are gonna be interesting to watch...

Glen, you're simply a legend in your own mind, and have now sunk to self-parody, having absolutely nothing to offer on the topic (if you ever did) than to prove I'm living in your otherwise unoccupied head rent-free, on a topic I haven't even addressed, nor need to.

Seriously, you've proven to everyone else with regard to this entire field what an utter fool one person can be when utterly out of their depth, so for your own good, I'm asking, pleading even, that you just put a sock in it. Staunch the bleeding, and just walk away.

You contribute nothing but raw obnoxiousness to this topic, something in no short supply on the internet, as an erstwhile guest on someone else's blog, and try to drag people in that aren't even a part of it. Both feet into your wedding tackle, with cleats, isn't notable, it's just notorious.

And you're so busy congratulating yourself arguing about "hobby drones" with respect to this post that you neglected to notice that nobody anywhere herein argued it was a use of same. So you're just swinging after the bell on a different topic you blew out your fourth point of contact weeks ago. Go home, wash out your pants, and better luck next topic. No harm, no foul.

I'm sorry you embarrassed yourself so completely that you're still trying to claw your way back to a win, but the game was over 27 innings ago, and you're just the only guy left in the stadium that hasn't noticed the other team won, and left, three games ago.

So please, put the bat down, before you hurt yourself.
Proving you're insane isn't impressing anyone, and you're simply demonstrating you're the last schmuck standing.
In a hole.
And you just keep digging.

If only out of respect for someone else's blog, just crawl back under your bridge, and let this go.

For what looks like around 2K you can put together an octocopter that can carry a DSLR /w lens. http://www.helipal.com/tarot-t15-octocopter-frame-set.html

That is probably enough to carry a small radar system and transmit the data back for processing. About 20 years ago they figured out how to make cheap short range radar systems. These are what are in cars to auto stop cars to avoid rear end accidents.

Hobby class drones come in all shapes and sizes, from the cheap indoor only ones to some seriously expensive 'toys' used by some videographers and researchers. Just because one's Wallyworld Chinamart special won't lift much doesn't mean someone's more expensive version won't.

And, surprisingly, it always seems that criminal gangs and terrorists are well-funded, so they have access to the more expensive versions.

Someone's arguments that his experiences with his toys covers all aspects of the issue are false. That's like listening to someone who only uses single-shot, break action rifles for advice on semi-auto sport rifles. Or listening to some inner-city only street racer give one tips on the best pickup for farm use.

The 'sport' of drones encompasses everything from tiny indoor ones (some quite complex and expensive) to super-fast ones used for racing to some people doing 'heavy-lift' competitions.

People have been using 'hobby' RC aircraft, 'hobby' rockets, 'hobby' model boats for all sorts of serious research, for serious camera work, and for illegal purposes (from delivery of items to photographing things that are not meant to be photographed) for, well, as long as hobby aircraft, rockets and boats have been around.

This reminds me so much of the people in the 1920's and 30's that had no issues with German government sponsorships of glider clubs. Nothing to see here, move it along...

Azad, a state owned defense firm in Azerbaijan, has begun production of the Pegasus 120 octocopter UAV. Also available in a quadcopter UAV version. The octocopter model version weighs 120 kg (264 pounds) and can carry a payload of 75 kg (165 pounds) for ten kilometers and do it without human intervention (and regardless of electronic jamming). Smaller payloads can be carried longer distances. In other words the Pegasus 120 is tremendously flexible.