This XKCD cartoon caught my eye. 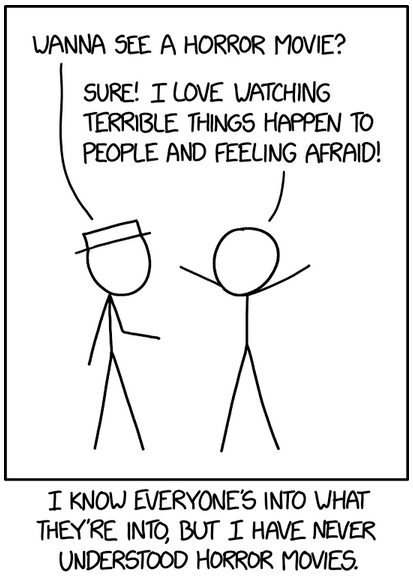 Go to the original to read the mouseover text.

Comedy horror, on the other hand, is a horse of a different color.  Who can forget "Love At First Bite"?

And then there's the famous thread on The Firing Line, started by our own Lawdog, titled "Lines I'd like to hear in a horror movie someday".  It's as funny today as when I first saw it.  If you haven't read it yet, you're in for a treat.

I suspect the films are made by people who have not experienced real life horror & lived thru it...

I have never understood it, either. My idea of horror movies ended with Bela Lugosi, Lon Chaney and Boris Karloff.

I don't know, Peter, there are a lot of different types of horror fiction. Like science fiction or fantasy, it's a broad genre. Someone (like me) who enjoys John Carpenter's "The Thing" might strongly dislike "Jason" or your stereotypical slasher-type movie (or vice versa).

As H.P. Lovecraft pointed out in his essay, "Supernatural Horror in Literature," there's the visceral fear that people get from, say, seeing blood and guts, and then there's the very different sort of discomfort/tension that comes from, for instance, confronting the scale of the physical world in relation to man, or the possibility of some terrible and inexorable event or force destroying the human world. We group fiction involving both these discomfiting scenarios under the title of Horror, but I think that people might seek them out for very different reasons. Of course, one often finds them mixed, where one is used to heighten the other.

For what it's worth, I also suspect that aficionados of the more "blood 'n guts" sort of horror do so because the safe, fictional violence is thrilling, and that they'd probably not find it so had they much personal experience of terrible events. Then again, I'm not sure a moralizing tone is really justified; consider:

"I've never understood why [roller coasters] exist at all. When one's [been in an out-of-control airplane], the [theme park] imitation thereof is merely a reminder of things one would much rather forget."

I've never been in a plane crash, or a roller coaster. No sense of thrill, I guess. :)

"I've never understood why horror films exist at all."
^
This! A thousand times this!
But, I, also have no desire to go to Disneyland.
It beyond my comprehension why someone would stand in line for hours to "enjoy" a faux experience.
Go out and DO stuff.
I once went to a convention and stayed at the Disneyland Hotel.
Did I go to Disneyland?
No.
A group of us charted a dive boat and went lobster diving off of the Channel Islands.
Disneyland? Puleeze.
Risk something.
Live!

As for the classic Lawdog list; I wanna add this riff on one of the other posts;

"So, Freddy Kruger is IN MY dream, huh?

And all he brought was those stupid finger knives?

But it's still MY dream, right?"

Most of what gets lumped into 'horror' I don't care for either, with two exceptions:

1) The Lovecraftian-type tale mentioned by PaulB, at least if it takes a more subtle and 'existential horror' bent as in 'The Colour Out Of Space'.

2) Ghost stories where the ghost isn't just there to scare the bejeebers out of people or crawl out of their TV, but instead is trying to right a past wrong.

Too much blood-n-guts stuff just makes me queasy, not horrified.

I have to disagree with the general consensus on the basis that I'm not into prescribing what people can like or dislike. So, while I generally don't seek out horror stories there area. few that I enjoy reading or watching; for example John Carpenter's The Thing is a great story.

I suppose what I'm saying is that whether one like horror is a matter of taste. I have friends who don't like Heinlein's Starship Troopers. The world is big enough to encompass most tastes.

Stolen from Dr. Rob at Lines I'd like to hear in a horror movie someday... by LawDog:

Two girls in the house with a stalker outside... "Does your dad have a gun?"

Girl 1: When they get home, tell your dad he's stupid.

Girl 1: You heard me. I didn't mumble. My mom taught me to shoot when I was six, and my dad gave me my first rifle when I was nine. These days I carry two. My Glock forty, which I am pro-feshnal 'nuff to handle, unlike Lee Paige, and my S&W lemon squeezer in .38 special. I'd give you the back up, but you'd likely shoot me in the back instead of the serial killer who thinks we don't hear him sneaking up the stairs. Stay behind me and maybe you'll learn something.

Girl 1: I said, you have termites in your head. You on the stairs! Drop that chef's knife and suck the carpet or I'll blow your nuts off!

If you like comedy horror you might want to take a look at "Tucker and Dale vs Evil." Hilarious and co-stars Alan Tudyk from "Firefly".

Lots of familiar names on that thread :)