The Russian aircraft carrier Admiral Kuznetsov has been damaged during the sinking of a floating drydock.  It's shown below in the dock before the undocking maneuver. 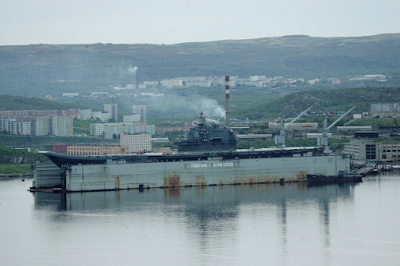 The news reminds us, once again, that floating drydocks are enormously useful, but also potentially very hazardous.  They require very well-trained operators to partially submerge the dock, bring a ship into it and secure it to the dock, raise up the dock, and (after repairs are completed) submerge it again to let the vessel out.  The whole operation relies on pumping water into or out of various tanks along the length and breadth of the drydock.  Any miscalculation or technical problem can unbalance the dock and its contents, putting unbearable strain on its structure that can result in serious damage to the dock and/or the ship it contains.  In this case, the dock sank, with the apparent loss of at least one life.

It's not the first time this has happened.  The Royal Navy battleship HMS Valiant (shown below) was seriously damaged in 1944 due to miscalculations about the pumping out of an Admiralty Floating Dock in Ceylon (today Sri Lanka), and the dock itself was lost. 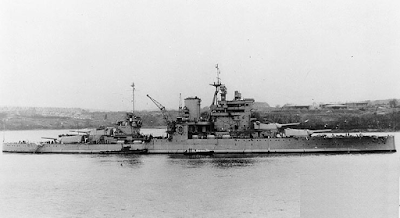 Wikipedia describes the incident as follows:

On 8 August 1944, she was severely damaged in an accident with the floating drydock at Trincomalee, Ceylon. The drydock was being raised with Valiant in it by pumping water from ballast tanks. The tanks were emptied in the wrong sequence for Valiant's weight distribution, which was exacerbated by her full munitions load. As a result, the drydock was over-stressed at its ends, broke its back and sank. Valiant's two inner screws were jammed as well as one of her rudders. Valiant had remained in steam and was able to avoid worse damage or sinking.


A more detailed account of the incident may be read here.  It must have been "exciting" for those on board!  HMS Valiant was so severely damaged that she never saw action again.  Fortunately, by 1944, the outcome of the war was no longer in doubt, and her services were not as urgently required as they had been earlier in that conflict.

Another, more successful (and very innovative) use of floating drydocks occurred at Massawa on the Red Sea in 1942.  US Navy engineering officer Edward Ellsberg, then a Commander (later Rear-Admiral), described how he successfully repaired the light cruiser HMS Dido, shown below (and subsequently two other Royal Navy cruisers) using a floating drydock that was far too small for them. 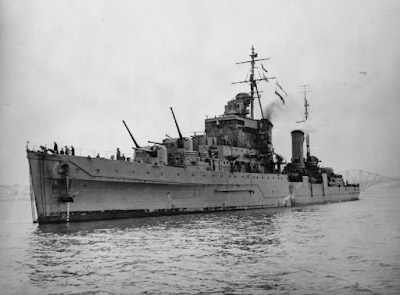 The Persian dry dock was, as usual for a large ship, fully but not abnormally flooded down. Excessive draft was not a problem in docking the Dido—it was her gross overweight and her excessive length that were the difficulties to be overcome.

The Persian dry dock could lift a maximum of only 6000 tons; her keel blocks could support a length of only 410 feet.

It was on the face of things my job to dry-dock a ship of 7500 tons displacement and 530 feet in length in a dry dock which could lift only 6000 tons and support a length of only 410 feet.

Of course, I could not do that. No one but God himself could have done it. I had no intention of even trying to do it. The thing that had struck me like a flash in Alex the day I was pondering the problem was that it wasn’t necessary to do it in order to repair completely the damage to the Dido. It so happened that the damage to the Dido was wholly at her stern. To repair it, all that was required was that I lift her stern clear of the water. I didn’t have to lift her bow out of the water also, as is normally done in docking any ship—there wasn’t any damage to the bow. And not having to lift her bow out of the water (which I couldn’t do simultaneously anyway) solved the other dilemma of the inability of the short dry dock to support such a long ship lest the unsupported part break off. The bow of the Dido was going to remain floating in the water at practically its normal draft forward, supported almost as usual by the sea, while I lifted only the stern clear of the water to repair the damage there.

The whole result was going to be that when docked for repairs, the Dido (and, of course, also the dry dock with her) was going to be on considerable of a slope as if sliding downhill towards her bow. The effect was to be about as if some titanic derrick had taken hold of that long cruiser at the stern and lifted that warship’s stern well out of water while leaving her bow afloat and undisturbed.

And that was how H.M.S. Dido was dry-docked in a dry dock too small to take her. She came into the dry dock as for any normal dry-docking, but was hauled through it till about 110 feet of her bow overhung the forward end of the dry dock altogether. Then the dry dock was pumped up with the ship level fore and aft, no trim on her, till the keel blocks of the dry dock touched for their entire length. At that point, the sliding bilge blocks were run in under the ship and the side spur shores run in against her sides to keep her from listing to either side as her stern lifted. At the same time, the steel hawsers to keep her from sliding forward were hauled taut.

After that, the dry dock was pumped up on a slant, with far more buoyancy aft than forward, till the stern of the Dido came clear of the water, leaving the overhanging bow afloat practically as usual. I stopped lifting when the stern was clear, leaving about four feet of water over the dry dock floor aft—no more than a man could wade in and reducing the slant of the ship by that much.

At that point the docking operation was completed and the repair job could start. I must admit that anyone looking across the harbor at that crazily slanted cruiser and dry dock would have concluded there was something cock-eyed going on in Massawa. And he would have been right.


Commander Ellsworth was promoted to Captain for his services at Massawa.  He wrote many books, fiction and non-fiction, during his career.  His three books about his World War II service are, in order of events:

No Banners, No Bugles - clearing the Vichy French ports of North Africa after Operation Torch;

The Far Shore - preparing the maritime engineering infrastructure for the invasion of Europe on D-Day.


I recommend them very highly to all those interested in the behind-the-scenes reality of naval warfare, and the enormous resources required to support the fighting ships.

Right up there with letting the air out of trucks stuck under bridges.

I've heard of other interesting uses of drydocks, like when the Great Eastern hit a spire outside of NY harbor and needed a dry dock, but nothing could handle it - so a box was built that could be clamped to the side and the work done in it!

Ellsberg was a 'master' of thinking outside the box!

Considering the lack of support he got from both the UK and USN, it's rather amazing he did so much in Africa. Another bunch of articles on the raising of the BB's at Pearl Harbor, and the Normandy in NYC, are also worth reading.

Just picked up a Kindle-copy of Cmndr. Ellsberg's The Far Shore, at a considerable discount, and am looking forward to reading his account of the D-Day landings and the aftermath - should be interesting, indeed.

That Russkie carrier is definitely having a "star-crossed" service career. It will probably be awhile before she's back in service - having that drydock-side crane drop through her flight-deck made a substantial hole...NOT good!