A level-headed, sober view of US economic reality


I've pointed out for years that official US economic statistics were (and still are) profoundly flawed.  This is the result of deliberate government policy, endorsed by politicians from both major parties as a way to conceal economic reality from voters (and to help them avoid having to pay realistic cost-of-living adjustments in salaries, entitlements and other benefits).  I've repeatedly cited Shadowstats and the Chapwood Index as two sources of accurate, reality-based economic statistics.

Last year John Williams of Shadowstats was interviewed by Peter Diekmeyer for Sprott Money.  He described our economic situation bluntly and without frills.

America’s economy has been progressing steadily. First quarter real GDP growth came in 2.2%. The official unemployment rate is 3.8%. Inflation, according to the Fed’s preferred measure is 2%.

But how accurate are those numbers?

Williams reckons that, using traditional calculation methodologies, true inflation is likely running above 6% and the unemployment rate over 20%.

Most importantly, Williams’ calculations suggest that the US economy has been in a two decade-long depression.

Williams argues that U.S. statistical agencies overestimate GDP data by underestimating the inflation deflator they use in the calculation.

Manipulating the inflation rate ... also enables the US government to pay out pensioners less than they were promised, by fudging cost of living adjustments.

This manipulation has ironically taken place quite openly over decades, as successive Republican and Democratic administrations made “improvements” in the way they calculated the data.

Politicians have thus been able to fudge economic data openly. For example, the chart below shows U.S. GDP growth as measured by official sources.  (Click images for a larger view.) 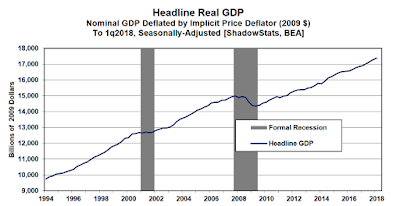 Using this adjusted measure, the U.S. economy is no bigger than it was two decades ago. Yet America’s population has shot up by 15% since then. This suggests the country has been in a major depression for some time.

There is far more at stake regarding the quality of U.S. economic data than whether politicians look good or whether U.S. pensioners get their benefits.

The United States, where government spending now accounts for more than 60% of GDP, has gradually morphed into a socialist, state-directed economy.

Government now controls essentially all of the commanding heights.

Without correct data, the bureaucrats, academics and monetary policy functionaries who conduct U.S. central planning won’t know where to direct public funds. This in turn could create further misallocations that worsen or prolong the depression.


There's more at the link.  The readers' comments at the foot of the article are also worth reading.

I'm sure most of my readers don't need telling that things are not good, economically speaking.  It's something many of us are experiencing every day.  President Trump's election probably delayed the inevitable, because he cut through a lot of the deadwood and managed to claw back some of what had been lost to inflation and depreciation;  but he can't do it alone.  Absent support in Congress and the Senate for a real, radical economic overhaul, transferring the emphasis from Big Business and Wall Street to the needs of Main Street America, things are almost certain to get worse - as Mr. Williams not only points out, but supplies impressive economic calculations to support his contention.

Miss D. and I are reviewing our own economic situation right now.  We've had some setbacks in recent months, but also some victories, and we can see progress.  We've established small emergency reserves, both in cash and in kind, and will continue to improve them as opportunity allows.  Nevertheless, we expect to be buffeted by strong economic winds, just like everyone else (as discussed below).  It behooves all of us to watch the signs of the times, and prepare as best we can to withstand the economic storms that are headed our way.  (I wrote about some practical steps one can take a few years ago.  Here's what one family did to survive their economic emergency.  That approach wouldn't work for everybody, but it did for them.)

In particular, I urge you to examine the Chapwood Index carefully.  It lists 50 major US cities, and calculates the real inflation rate each is experiencing in terms of a "basket" of the 500 "most frequently used and relevant items" of household expenditure.  It recalculates the rate every six months, for every city.  Find the two or three cities nearest to where you live, and average their inflation rates.  That average is probably pretty close to what your own real rate of inflation is at present.  I guarantee you, it won't be even close to the "official" US Government inflation rate - but the Chapwood Index rate is far more likely to be accurate in terms of your daily expenditure, because it measures what the average American needs and buys, rather than some statistical conglomeration.  It's a sobering and eye-opening analysis of your economic reality.

According to Chapwood, the three major cities nearest to our home are currently averaging 9.14% annual inflation.  If that continues, it means every dollar in my wallet right now, at the beginning of 2019, will buy the equivalent of only 91.6 cents worth of goods and services (at current prices) by the end of 2019.  At the end of 2020, given the same inflation rate, every current dollar will buy just 83.9 cents worth, and at the end of 2021, a mere 76.9 cents - a loss of almost a quarter of its current purchasing power in just three years.  Food for thought, no? - and a scary illustration of the real impact of the true inflation rate on our income and expenditure.

Most people don't realize their raises - if they receive one - usually don't cover the increased costs due to inflation. It looks good on paper, they feel really good for awhile, and then they're back to wondering on how to make ends meet. It's a form of thievery, and we pay the thieves to accomplish their task.

There is enough of a shadow economy working and a 'cash based' economy that it's difficult to know what the national economic situation really is. For example, if you live in an area where there is a vibrant illegal drug trade, you'll find large numbers of unemployed people driving around in new cars, going on lavish vacations, etc. Likewise there are a lot of people on government benefits who work for cash.

For example, in the 1980's Newport Beach, California, an affluent coastal community, was known as the Fraud Capital of America. Scams run from that city brought hundreds of millions of dollars per year into Newport and Orange County. The trickle down led to faux affluence.

@LL: Why do you think there's such a push for a cashless, all-electronic, economy? It's not just for taxes; it's for absolute monitoring of the people.

IMHO, the collapse is coming. It can't be stopped. Others see it too:

The question is not if it happens, it's WHEN. And HOW BAD will it be, and HOW LONG will it last.

As a total non sequitur to this post, but a topic on which you've hit several times:

Haven't heard much about Ebola (or Marburg) lately.

I fully expect one of these, if not both, to hit the European continent in 2019 given the relentless flood of people coming in.

The biggest threat that inflation holds is to savers. Your dollars in the bank are losing value daily, and can go to nothing VERY quickly.

One only has to look to Venezuela to see that having 200K in the bank quickly meant not having enough to eat, not the nice retirement that was planned. By quickly, I mean less than 5 years.

This is why I think that rather than have savings for retirement, one must have INCOME STREAMS. Especially ones that can be readily or automatically adjusted for inflation.

I advise buying Real Estate, and when times are "good", paying the mortgage off faster -- "saving" in your house.

Or houses, if you can afford sometime to buy and rent (tho being a rental manager IS a hassle).

It used to be that most self-made millionaires got rich thru real estate, tho most probably were more risky than most more reasonable folk would be.

I would discount the Chapwood Index unless you are in the 0.1%: they include a lot of luxuries like maid service and fillet steak.