Border security: the facts speak for themselves


When Speaker of the House Nancy Pelosi said last week to Secretary of the Department of Homeland Security Kirstjen Nielsen, "I reject your facts", she was implicitly asserting that the presentation by DHS of the situation on our southern border was, in fact, lies.  Her emphasis was on "your" facts, rather than "the" facts, which Ms. Pelosi doubtless considers somewhat different.

Nevertheless, the DHS presentation was appalling in its figures and the picture it pains of our border security.  We're not just dealing with illegal immigration any longer:  we're dealing with an active, planned invasion, where family groups are arriving together, fully intending to make a new home in the USA and stay here.  One can only speculate how many of them are sponsored and/or assisted in doing so by pressure groups, seeking to deliberately alter the demographic makeup (and hence the voting patterns) of US society.  Personally, I think such assistance is largely to blame for the spike.  I also think it explains why the Democratic Party is so reluctant to stem the tide.

Judge for yourself.  The White House has made available the DHS briefing (link is to an Adobe Acrobat document in .PDF format) it intended to offer to all those at the meeting last week.  It makes very sobering reading.  Here, for example, is just one slide from the presentation.  Click the image for a larger, more readable view. 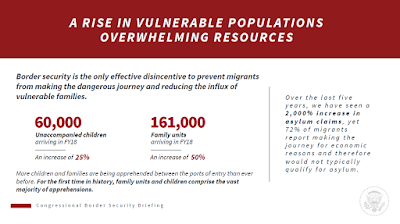 If DHS's figures are correct, then President Trump would be (IMHO) entirely justified in declaring this a national emergency, and taking urgent steps to stem the flow of illegal aliens across our southern border (and deport those already here).  I can only wish him success - irrespective of his politics.  Go read the facts for yourself, and see what you think.

As soon as he does, the left will scream and the lawsuits will fly in the 9th circus... sigh

I reject your reality, and substitute one of my own......

"You have made your judgement. Now try to enforce it, you traitorous dictators in black robes."

Families crossing borders to partake of a better civilization? Think I have read of similar cases in history... Roman empire being one.

The facts may speak for themselves, but that doesn't mean Nancy Pelosi doesn't stick her fingers in her ears and go "lie lies lies!".

A few years ago a wag thought of how to kill two birds with one stone:

1) Florida is being overrun by a population explosion of alligators.
2) Southwest America has an influx of illegal aliens.

His solution: Simply round up the surplus gators, transport them to the Rio Grand and turn 'em loose. Problem solved.

If only life were truly that simple...