"If you want to put America first, you’ve got to put its families first"


Last week Tucker Carlson produced a long, thoughtful analysis of the problems of America today.  He may be a conservative commentator, but his analysis isn't grounded in conservatism as such.  Instead, he looks at the root of American society - families - and asks how we got where we are today.  He identifies both major parties (quite correctly, IMHO) as equally guilty of the current malaise - something I've done in these pages for years, as regular readers will recall.  Mr. Carlson calls for a family-focused and family-centric solution.  I found it very hard to disagree with either his arguments or his conclusions.

The video of his presentation is provided below.  The full transcript is available here.  I'd like to highlight a few points from the transcript, and recommend them to your attention.  Bold, underlined text is my emphasis.

Donald Trump rode a surge of popular discontent all the way to the White House. Does he understand the political revolution he harnessed? Can he reverse the economic and cultural trends that are destroying America? Those are open questions. But they’re less relevant than we think. At some point, Donald Trump will be gone. The rest of us will be too. The country will remain. What kind of country will be it be then? How do we want our grandchildren to live? These are the only questions that matter.

... culture and economics are inseparably intertwined. Certain economic systems allow families to thrive. Thriving families make market economies possible. You can’t separate the two. It used to be possible to deny this. Not anymore. The evidence is now overwhelming. Consider the inner cities. Thirty years ago, conservatives looked at Detroit or Newark and were horrified by what they saw. Conventional families had all but disappeared in poor neighborhoods. The majority of children were born out of wedlock. Single mothers were the rule. Crime and drugs and disorder became universal. What caused this nightmare? Liberals didn’t want to acknowledge the question. They were benefiting from the disaster, in the form of reliable votes. Conservatives, though, had a ready explanation for inner city dysfunction: big government. Decades of badly-designed social programs had driven fathers from the home and created what they called a “culture of poverty” that trapped people in generational decline.

There was truth in what the conservatives said. But it wasn’t the whole story. How do we know? Because virtually the same thing has happened decades later to an entirely different population. In many ways, rural America now looks a lot like Detroit. This is striking because rural Americans don’t seem to have much in common with people from the inner city. These groups have different cultures, different traditions and political beliefs. Usually they have different skin colors. Rural people are white conservatives, mostly. Yet the pathologies of modern rural America are familiar to anyone who visited downtown Baltimore in the 1980s: Stunning out of wedlock birthrates. High male unemployment. A terrifying drug epidemic.

Two different worlds. Similar outcomes. How did this happen?

What will it take a get a country like that? Leaders who want it.

Socialism is a disaster. It doesn’t work. It’s what we should be working desperately to avoid. But socialism is exactly what we’re going to get, and soon, unless a group of responsible people in our political system reforms the American economy in a way that protects normal people.

If you want to put America first, you’ve got to put its families first.


There's much more at the link - or you can just watch the video below for his full presentation.  Highly recommended reading and/or viewing.

Mr. Carlson's recent book, "Ship of Fools", is in many ways an expanded version of his comments above.  It makes for sobering reading. 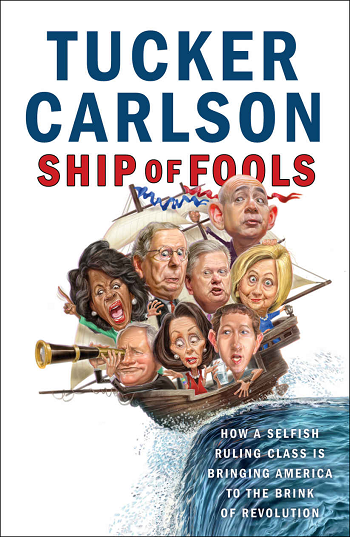 Regardless of one's personal politics, I think we can all benefit from sober, careful reflection about what Mr. Carlson has to say.  We may not agree with all of it, but he's offered a serious and (IMHO) even-handed analysis of what got us into this mess, and a way to get out of it.  Unless we listen to people like him, on both sides of the political aisle, I'd say we're riding for a fall, collectively and individually, in these formerly United States.

The greatest tragedy of this situation, IMHO, is that the US education system has been so deliberately, systematically dumbed down over the past half-century that most of its graduates are no longer capable of independent thought.  They haven't been taught how to think - only how (and what) to feel about a problem or situation.  There's no way out of this mess through feelings.  It can only be solved by thinking it through, analyzing its causes, coming up with workable solutions, and implementing them.  None of those things involve feelings at all - only facts . . . yet facts are precisely what most of this country's people (including many of our politicians) are refusing to face.

Thanks for the link. Tucker went on an epic rant. It's almost like he knows his days at Fox are numbered.

Agree on families; but also God.

The US education system a tragedy? Oh no, that's a feature. The Uniparty wants compliant subjects, and this is the way to get them. Teach them that there is no God, no Truth, that facts are mutable and that feelings are what count.

“Power is in tearing human minds to pieces and putting them together again in new shapes of your own choosing.”
― George Orwell, 1984

I would assume that his criticism of the right in this case revolves mostly around the outsourcing of manufacturing, mainly to Asia, as well as outright scans such as H1B visas. These are issues that the right has been negligent about. Although, to their credit, excessive regulation is one of the factors driving the outsourcing trend in manufacturing.

There are signs that this is turning around, even prior to Trump's election. First, running a manufacturing operation in China is not easy. 14 hour plane rides combined with the intricacies of Chinese business culture does not make for an easy job. Second, Chinese labor rates are much higher than they used to be. Third, for reasons I will not delve into here, I do not expect much of the rest of the world to do a Chinese-like manufacturing renaissance. Lastly, automation reduces payroll as a percentage of COGS, thus reducing the benefit of low-cost labor. Contrary to popular thought, automation does NOT eliminate good blue collar jobs. There is a huge demand for electricians (those that can read electrical schematics and wire a control panel - construction industry "electricians" do not count), and all kinds of mechanical trouble-shooting and maintenance people. So, we are seeing a slow return of some manufacturing to the states. I believe this trend will continue.

Elimination of the H1B scan is trivially easy to eliminate can could be done by executive order. You see, big companies like HP and Disney hire H1B's because they can be abused. They have 30 days to find a new sponsor and job once they leave a job before they loose their visa status. An executive order that extended this grace period to one year would have the perverse effect of benefiting American workers for two reasons. One, it eliminates the ability of large companies to get this labor on the cheap (and to abuse them) and two, the H1B's are often less competent than the American workers they are replacing.

I think just these two policies/trends alone would remedy the problems that Tucker Carlson decries in his video.

Speaking of families and the raising of kids, what do you guys think of Alfin's raising of "dangerous" children blog?

For some reason, a lot of alt-right guys don't seem to be as enthused by the "dangerous" child concept as I thought they would. The values promulgated in this blog such as competence, accomplishment, self-reliance, and thinking for oneself rather than plugging into group think are the values I consider to be the bedrock of conservative thinking.

The schools are key. You can bandaid the current mess, but unless you fix the underlying CAUSE of the problems, you cannot fix the future. Frankly, you would probably have a better future if Trump eliminated all government control of all schools, and mandated they be closed permanently. They are actively working to create and continue the downfall of the nation.

If he can't close them, blacklisting all the current and former teachers would be a start. All teachers need to be vetted for competency and lack of socialist ideology. Most of them will fail for one or both areas of concern.

It's been more than 50 years that schools have been lacking. High school in the 60's showed me that there were serious problems in what they were teaching. The history textbooks didn't agree with the books in their own library, just for starters. I read the library for entertainment, and the textbooks the first week of school. Teachers hated me because I could show them how stupid and ignorant they were.

There was a huge difference between school then, and school fifty years earlier. The schools were being dumbed down early in the 20th century, and it's been downhill ever since. Each generation of teachers being taught by dumber and dumber instructors, deliberately. All in the pursuit of ignorant, compliant serfs for the elites.

Thaddeus McCotter, former Congress-critter from Michigan and arguably one of the brightest and most well-read of the lot, has more to say about Tucker's rant here: https://amgreatness.com/2019/01/05/up-the-populist/

McCotter has well-founded concerns, albeit he is in general agreement with Carlson's thesis. There is NO question that the family is the single most important part of any well-ordered society. And there is little question that both Left and Right types have undermined the family one way or the other over the last 50-60 years.

The deliberate dumbing down of the educational system has a been a willful act on the part of leftist educators with an eye to GETTING DEMOCRATS ELECTED to office whenever and wherever they are on the ballot. That is what is at the heart of many (most?) of our problems today and for the past 40 years. There has to be a majority of low-intelligence electors, or close to it, coupled with those orchestrating the allegiance of the "gibs me dat" voters, in order for the Democrats to hang on to their positions of power. Without stupidity/ignorance they are doomed to be the minority.

He doesn't quite say what they are, but equalizing tax rates on labor income and capital income would be a good start -- I'd even go for progressive capital income taxes.

But politics is downstream from culture; which itself is heavily influenced by academia. The "open secret" of discrimination against pro-life Republicans needs to result in loss of gov't tax benefits, and conversion to normal, taxable organization.