Science, art, and history come together


I was fascinated to read that scientists investigating rogue waves have not only recreated one under laboratory conditions:  it's also an almost picture-perfect copy of a very famous wave in Japanese art.

Mark McAllister at the University of Oxford and his colleagues have recreated the Draupner wave, the first rogue wave ever recorded.

The 1995 wave, measured in the North Sea, had a maximum height of 25.6 metres ... Prior to this, the existence of these freak waves was merely anecdotal.

The team generated two sets of waves in a circular tank, and crossed them at various angles in an attempt to recreate the conditions that formed the Draupner wave. When these wave groups crossed at an angle of 120 degrees, they coalesced to produce a wave with the scaled height and length of the Draupner wave, 1/35th of the original. 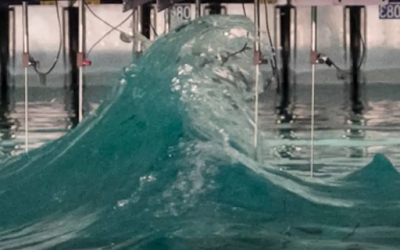 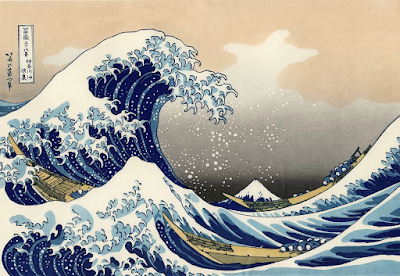 While the causes of rogue waves aren’t known for certain, they are more common in crossing sea conditions, says McAllister. They are difficult to predict, appear suddenly, and have previously been implicated in maritime disasters.

I've written about rogue waves in these pages before.  They're far from unknown, but previously only from anecdotal evidence, plus the damage they left behind.  For example, the Norwegian tanker Wilstar ran into one off South Africa in 1974.  This was the result. 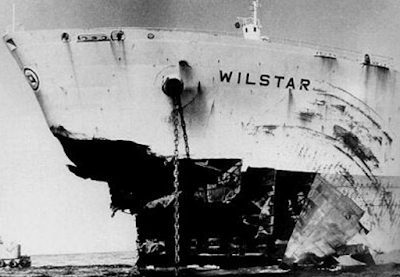 That photograph was taken in Cape Town harbor after the ship very, very carefully made her way there, to offload her cargo of crude oil and undergo preliminary repairs.  I went down to the dockside to look at her.  You could, quite literally, have driven a double-decker bus into her hull through the hole in her bows - it was that big.  I think every seaman and merchant navy officer in the harbor took the opportunity to stroll over to her berth and stand there, looking very thoughtful as they examined the damage.  It was most impressive . . . and they were about to sail in the same seas where she'd met that wave.  It gave them plenty of food for thought!

The Draupner rogue wave was the first of its kind to be precisely, accurately measured, allowing further investigation.  Full marks to those involved for determining the angle at which cross-currents need to merge to generate such waves.  Perhaps, with this information, weather conditions favorable for them to occur might be better forecast, improving maritime safety.

As for Hokusai's famous print, perhaps the best-known artwork in Japanese history, here's more information about it.

I'd love to know how and why Hokusai's wave image so closely matches that of a real rogue wave.  Coincidence?  Had he, perhaps, seen or been told of such a wave off the coast of Japan?  I suppose we'll never know.  It's one of the more tantalizing questions of art history, IMHO.

One of the theories about why the Edmund Fitzgerald sank was that she ran into such a wave. Lake Superior's easily big enough to generate them, and late autumn weather on the lake is chancy at best.

I actually wrote about the same thing yesterday. While not consistent, and subject to observation bias, it does appear that the crossing angle makes for a better probability of a wave forming. Observations and examples have tended to come from places where geographic and oceanographic features cause reflected waves or wavespeed loss due to friction from shallowing, resulting in directional changes to some waves.
I still contend that most reported rogue waves were cases of head sea parametric rolling, which is a more common phenomena.

Rogue waves must be on the mind of any designer of the ocean city-state (seastead).

I saw this picture when I was a kid. It didn't seem like anything special, and I expected I would see similar images in the future. But I didn't, and this image has stuck with me ever since. Kind of weird.

Video was interesting, but they just had to roll in AGW/climate change. Why?

1966: North Atlantic. Italian steamship Michelangelo is hit by a 21-meter
wave en route to New York. The water smashes through the bridge and into
the first class compartments, killing two passengers and a crew member.
(Source: http://www.fettes.com/shetland/wave%20environment.htm)
1968: On June 13, 1968 the tanker World Glory, carrying 49,000 tons of crude
oil, encountered an abnormally large wave 105 km east of Durban, South
Africa. The ship was broken in half, and both halves sunk within four hours.
(Source: http://www.dynagen.co.za/eugene/freaks.html)
1973: A reported rogue wave off the coast of Durban, South Africa strikes the
12,000-ton cargo ship Bencrauchan. The ship is towed into port, barely floating.
(Source: http://brucestutz.com/articles/rogue3.htm)
1973: The cargo vessel Neptune Sapphire on her maiden voyage, carrying about
15,000 tons of cargo. The impact of a single, large wave off the southeastern
shore of Africa caused the bow and 61 meters of the forward part of the ship to
break away and sink. The remainder of the ship was towed to East London.
According to Capt. DAI DAVIES, Smit Marine, South Africa, this big wave just
came out of nowhere, hit the bow, and destroyed the whole bow. (Source: http:/
/www.oceansatlas.com/unatlas/issues/emergencies/OceanPhenHDNO/Dangerous.
html)

New Scientist has some excellent articles as well, but they are behind the paywall.