Following my article earlier this morning about the real inflation rate, some readers e-mailed me in disbelief that the buying power of their dollar could be eroded as fast as the example I provided.  In order to make the situation clearer, I'd like to go into that in more detail.

Briefly, if you assume that your dollar has 100 cents of buying power at today's prices, the rate of inflation is one factor (but not the only one, of which more later) that will reduce that buying power over time.  Let's say the inflation rate will be 5% this year.  That means something that costs 100 cents today will cost $1.05 at the end of the year:  or, to put it another way, if I still have only my original dollar to spend, it will buy me only 95¼ cents worth of that something in December 2019, in terms of January 2019's purchasing power.  To calculate that for any amount at any inflation rate, apply this formula:  100 cents, divided by the rate of inflation for the period in question (so that a 5% inflation rate would equal 105% of current prices at the end of the year), then multiplied by 100 to give you a percentage of the original purchasing power of 100 cents.  Using spreadsheet operator symbols:


Using that formula returns this spreadsheet of how various inflation rates affect the buying power of one dollar over time.  I've rounded the results to the nearest cent.  Click the image for a larger view. 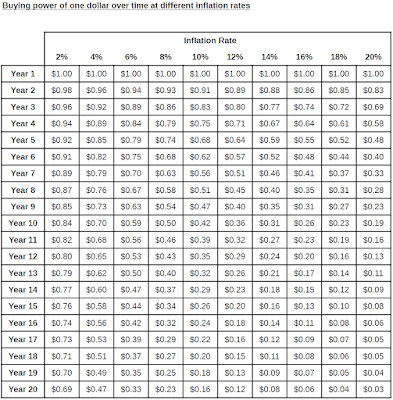 You can see that even at a 2% inflation rate (approximately what the US government claims is the "official" rate, which - as we saw this morning - is wildly inaccurate and underestimated), your dollar will lose about a third of its purchasing power over 20 years.  At a more realistic 10% (which is where I'd personally guesstimate overall US inflation to be right now), in 20 years time, your current dollar will be worth a mere 16 cents in terms of purchasing power.  I've lived in a high-inflation country (South Africa) enduring decades-long double-digit inflation, and watched the purchasing power of my money eroded to a frightening extent, impoverishing the country as a whole and most of its people.  Inflation is no joke.  The damage it does is very real.

Nor is inflation the only factor in the buying power of your dollar.  The strength (or weakness) of the dollar is a major factor when it comes to the cost of imported products.  If the dollar weakens against the Chinese renmimbi, it means that every import from China costs US consumers more dollars.  (Conversely, if the renmimbi weakens against the dollar, US imports of Chinese products become cheaper).  Import tariffs add to the problem.  If the US government imposes a tariff on imported products, that has to be added to the cost of bringing them into the country, which ends up costing US consumers more dollars to buy them.

There are other factors affecting the value of the dollar and its buying power, but I won't go into them right now, because of their complexity.  Suffice it to say that the buying power of the dollar in your pocket has been steadily eroded for the past several decades, year in, year out.  This calculator takes multiple factors into account when determining what inflation has done to the value of your money.  Try it for yourself, and see its results.  For example, it shows that $100 in 1970 dollars was worth between $498.00 to $1,820.00 in 2017 dollars, depending on the factors used to calculate its then-current buying power.  To put that the other way around, a 1970 dollar lost between 80% and 94.5% of its purchasing power between that year and 2017.

That's why, in a high-inflation environment, it's usual for people to spend their money on items that will hold their value well.  That allows them to do one or more of a number of things:

So, there you have it.  In a high-inflation environment, holding on to cash is a risky business, because it loses buying power every year - sometimes precipitously.  That's another good reason, while times are (relatively) good, to build up reserve supplies of things you might need.  If you lose your job, and have to struggle to find money for a few months while you look for another, you can always eat your emergency food reserves, or change the oil in your car using the lubricant you've stored in your garage, or replace batteries from your emergency stash as they wear out - if you have those things.  If you don't . . . you're S.O.L., and broke at the same time.  That's not a good place to be.

Sadly, many today live paycheck to paycheck with NO thought of possible problems...

I foresee a day when lead will be worth more than gold as a trading commodity. Also, since gold has a higher melting point, would we be shooting gold bullets and trading in lead?

The price of USPS 'Forever' stamps is fifty-five cents as of this week.

Cut to the chase:

Ignoring the spot price unicorn, an actual 1 oz gold coin today will set you back about US$1300.

That means compared to that $1 in 1932, you dollar today is worth about exactly 1.5¢, i.e. worth less than the cost of the price of the paper and ink to print it. It's functionally toilet paper.

That's actual US inflation over the past 87 years.

(For comparison, 6 sheets of Charmin UltraSoft go for about that same 1.5¢ in current dollars, which is the only thing keeping people from using federal reserve notes in the loo.)

Wait until you get Argentinian/Zimbabwean/Venezuelan rates of inflation, and the Charmin will be better currency than fiatbux, at that point, being both more absorbent and softer on your delicate bits. And probably as scarce then as it is in Caracas now.

The problem with gold is that fedgov confiscated it once before, they will do it again. Even if you manage to hold on to your gold, you're not going to be able to trade with it, too easy for someone to turn you in. IMHO, better to get non-perishable goods you will use (or trade with) later. At least diversify your 'savings' so a robbery or law change doesn't impoverish you.

I'm looking for where I or anyone suggested holding nothing but gold, and not seeing it.

The point is that fiatbux are illusory pieces of colored and engraved toilet paper.

Money is called silver and gold.

Do as seems best to you, but when government adds a zero to all bills - as has also been done, and more than once - a non-zero portion of your "diversified" holdings that are in cash will be nigh worthless.

Gold is for compact portability, an ounce being of little utility for most transactions.
Silver is for daily transactions.
After that, you have barter for and with commodities and services.
A man who can weld, build furniture, or fix a toilet or transmission will have plenty of business with people who have fresh eggs, fresh fish, fresh milk, and fresh produce to trade.
True now as ever was.

I'm looking for where I or anyone suggested holding nothing but cash (or even significant amounts of cash), and not seeing it. I said non-perishable goods. What goods depends on your area.

Aesop, you sung the praises of gold, I pointed out the downside. I'm looking at family history - grandpa saw bad times ahead in the '20's, bought land and gold instead of stocks, and still ended up poor after FDR took his gold and property taxes stripped his land away. Dad worked as basic farm labor at 13, in return for room, board, and some food sent to the family.

So, yeah, I'm a bit wary of gold. I do have a coin collection of sorts, looks remarkably like junk silver. Coincidence, obviously.