I'm noticing more and more reports of lithium-ion batteries, packed in luggage or shipping containers, causing fires that can potentially be devastating. 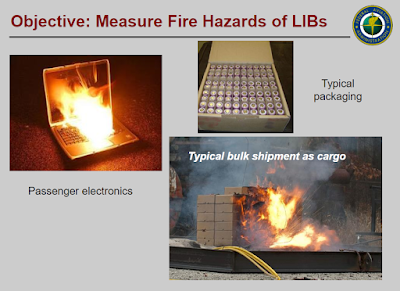 Several container ships have had fires on board that damaged them severely, notably MV Maersk Honam and MV Maersk Kensington in March 2018, the SSL Kolkata in June 2018, and MV Yantian Express this month.  As a result, changes to the guidelines for dangerous cargo in containers are being discussed.  It's not certain that lithium-ion batteries were involved in all the incidents, but experts in the field say that danger is increasing due to the growing number of such batteries included in modern consumer electronics.  Lithium-ion batteries will burn or explode if punctured, can't tolerate water damage, and are very sensitive to shocks.

Aircraft are also at risk:  lithium-ion batteries have caused more than one fire aboard airliners - so much so that the ICAO has banned them from being loaded into cargo compartments of passenger aircraft.  The most recent example happened just a few days ago.

The latest fire involved Air Transat flight 443, on an Airbus A321 operating from Cancun to Vancouver on 12 January.

During the baggage loading process in Cancun, "brown smoke could be seen coming" from one piece of luggage, according to a preliminary aviation incident report released by the Transportation Safety Board (TSB) of Canada. The fire burned through the luggage, it adds.

"The suitcase was taken away from the gate area and sprayed with a portable fire extinguisher," says the report. "It was determined that the fire and smoke was caused by electronic cigarette batteries that were overheating."

Air Transat did not immediately respond to a request for comment.

The incident did not cause injuries, but it punctuates a risk the TSB highlighted last week in a report into the cause of a June 2018 fire involving a WestJet Boeing 737-700.

That aircraft was operating WestJet flight 113 from Calgary to Vancouver when the crew received an aft cargo fire warning light while climbing through 9,000ft, the TSB's 18 January report says.

The crew discharged fire extinguishers and safely made an emergency return to Calgary, where ground workers discovered a scorched bag in the cargo hold.

The passenger who owned the bag "inadvertently packed two spare lithium-ion batteries for his e-cigarette", the TSB says. "One battery in the charger experienced a thermal runaway."

The WestJet incident "highlights the hazard that lithium-ion batteries, such as those found in electronic cigarettes, pose to the safety of aircraft when stored in checked baggage," it adds.

Yet another reason to be leery of commercial air travel . . . as if the TSA wasn't bad enough!

Commercial air travel is fine. I feel perfectly comfortable when I fly.

I read this story another way. The instability of lithium-ion batteries is just another puncture in the hype of electric cars. We've already seen images of that horrific Tesla car fire in Florida where those two young men burned to death. There have been others.

Ford really took a drubbing in the 1970's with the "exploding" Pinto and later with the Ford Explorer. Pud (remember him?) called the later the Ford "Exploder" in the early 00's. Ford had to pay out in several expensive lawsuits as a result of these two situations. It seems that it is time that Tesla paid.

Natural consequence of wanting mobile devices that do more and last longer. Every increase in energy density narrows the gap between "battery" and "bomb". Sure, poorly made ones exacerbate the risk but this isn't a particular fault of lithium ion chemistry as it is any high density storage medium (see also: gasoline, kerosene, alcohol, etc.)

Lithium-ion batteries are one hot product.

It would be interesting to see if these batteries can pass the same shipping safety test as smokeless powder- consumer packaged material is tightly stacked on a pallet and wrapped, then shot with a high powered rifle. Exploding or catching fire indicates failure. Video please.

bmq215 "Every increase in energy density narrows the gap between "battery" and "bomb"... Love it!!
I'm also given to understand that there are different chemistries in the Lithium-Ion family of cells. Some are more robust than others, but at the price of energy density.

bmq215: Turning batteries into bombs is, after all, a semi-standard SF thing - Speaker-to-Animals and his improvised grenades, Simon Illyan "fishing" with stunner powerpacks, and, come to think of it, the classic phaser on overload. We're not there yet, but working on it.
AJ: The notably different one is LiFePO4, which is (reputedly) much better behaved in terms of safety, service life, and ease of charging, but doesn't have quite the impressive energy density.
Larry: Yes, a fair amount of the trouble involves cheap batteries, but doesn't Tesla have its own factory? Also, even a good Li-ion cell can fail catastrophically if mistreated... overcharged, say, or packaged too tightly so it doesn't have room to expand (as a certain phone maker discovered a few years ago).
Now as I think of it, the Tesla battery failures could (I don't have detailed information) be secondary to failures of the battery management system. I recently saw a YouTube vid that showed a spectacular failure of a Tesla battery pack that was being improperly charged without benefit of Tesla's fancy electronics. Or it could just be that, with the huge number of cells in one of those packs and the large number of packs in service, quality control isn't quite good enough, so there's an occasional cell failure, and once that happens the density of the pack allows a chain reaction.

Eric Wilner: The Tesla fire accident mentioned by kurt9 above was less related to charging, and more related to losing control on a "25MPH" curve in a 30 MPH zone because the driver failed to slow down quickly enough from 112MPH.

Unknown: Interesting. I have the impression that some of the battery fires have had causes less obvious than, er, gross mechanical trauma, but it's always possible that any given incident isn't being properly reported.
The YouTube vid I mentioned was by "Rich Rebuilds", and involved a Tesla battery module that had been transplanted into an old Disney car of some sort.

Most of Ford's problems with the Pinto and Explorer were media hyperbola. Same with Chevy's Corvair.