Frankly, I'm astonished that the far left hasn't yet caught on to how well they've been played by the Internet underground.  Take, for example, Antifa.  This is one of their propaganda pieces (clickit to biggit): 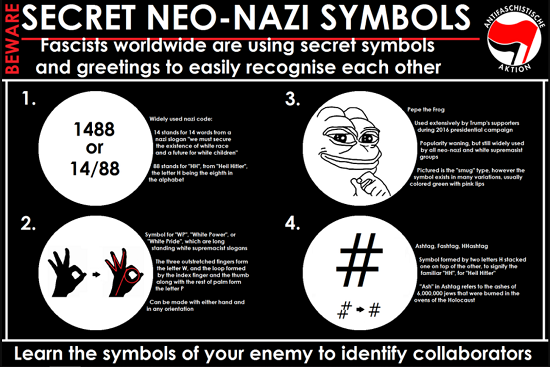 If you're wondering how those symbols came to be associated with the far right, here's a clue.

Members of the notorious internet forum 4chan have proposed a new troll campaign aimed at converting the hashtag into a white supremacist symbol.

In a post, on the /pol/ or “politically incorrect” message board, an anonymous user calls on his fellow forum frequenters to begin creating propaganda that incorporates the commonly used pound sign.

“We must start using # to represent the swastika on memes and social media,” the user states ... “It will be a perfect win-win situation,” the user adds. “Either Twitter will have to accept blatant Nazism on its forums or it will effectively have to find a way to get rid of the site’s core mechanics.”

Although the idea was met with mixed reviews, a slew of campaign posters and memes began circulating on Twitter. The posts were purported to originate from sources such as antifa–a far-left collective known for using direct action or violence against far-right groups.

In perhaps its most successful campaign, 4chan was seemingly able to convince countless people that the “OK” hand gesture was actually a secret white supremacist signal. It became so prominent that the Anti-Defamation League (ADL), one of the country’s oldest civil rights organizations, released a statement calling on individuals to consider the context in which the hand gesture is used.

“Has the simple thumb-and-forefinger ‘OK’ hand gesture become a common white supremacist hand sign?” the group asked. “Not quite, but it has become a popular gesture used by people across several segments of the right and far right—including some actual white supremacists—who generally use it to trigger reactions, or what they would describe as ‘trolling the libs.'”

While 4chan’s latest campaign is almost certain to be largely ineffective, the hoax highlights how the battle of ideas is fought in the digital era.

I've known the circle-of-approval finger-and-thumb gesture since I was a child, and I've used it since that time, too.  It's always meant simply "That's great!" or "Nice!" or something like that.  Never in my life had I heard of it being used as a secret neo-Nazi symbol until the idiots of Antifa began claiming that.  I didn't believe it then, and I don't believe it now - and if any Antifa member sees me using it and takes offense, I shall point that out to them in words of approximately one syllable.  Actions may be more appropriate than words, of course.

Be that as it may, I've also never heard of the hashtag as a neo-Nazi symbol, or (at least in the circles in which I move) 1488 or Pepe the frog.  I reckon it's all trolling of the far Left - and very successful trolling, too!

I'll have to think up a few more such memes.  I mean, why should 4chan have all the fun?

The circle-of-approval has always been just that to me. "Ok". never heard of anything else until I caught some headline by the ADL.

So many idiots now days. Really. It is just getting ridiculous.

I never heard of any of that other stuff either. You can bet there are enough indoctrinated leftists that will believe it, though.

However, the sign has had other meanings in other countries. In Brazil, I believe it is more insulting than the "finger. But it still had nothing to do with Nazi's.

So ... Antifa wears black, has a black, red, and white symbol, marches in the streets beating up political opponents, wants to curb the first amendment and the second amendment, blames one ethnic group for all evils, and follows a form of socialism.

Exactly how are they different from National Socialists?

How about how 420 is actually a neo-Nazi symbol because one-nut Austrian's birthday was 4/20. Half of Antifa are probably pot-heads so that could be fun to watch.

Kristophr; they are different because they are International Socialists (i.e. Communists). Really, Antifa originally started in 1932 as a merger of various Communists Paramilitary groups (primarily the RFP from the Communist Party of Germany). They were, of course, exterminated when they failed do the same to their rivals but were recreated in the 1980s, probably with backing from the Soviets or at least their Useful Idiots at various universities.

For the mst3k lovers out there, the "ok" hand sign had a different memology behind it...
https://www.youtube.com/watch?v=Jmb0IbuBowI

IT's all fun and games until a Coastie officer gets sacked for displaying the OK sign in the background of a briefing video.

"Exactly how are they different from National Socialists?"

1) The Brownshirts were better organized

2) The Brownshirts had better fashion sense.

3) The Brownshirts had better manners.

Are you being serious?

@Tam: 1488 is an American Nazi symbol, dating from the mid-1980's. At that time I was dealing with that sort of thing in South Africa, where it wasn't known or used at all, so it's not surprising I didn't know it. Since coming to America, my only contact with that sub-culture has been through prison gangs, and the ones I dealt with didn't use that symbol (its use varies by region). They had others, of course, less well-known to the general public.

The OK symbol is definitely obscene in Brazil.