Isn't it interesting how the Democratic Party in Congress and their allies in Democratic Party-controlled states are pushing so hard to get their hands on President Trump's financial records?  I can't recall them ever doing the same about their own tax records.  When do we get to see Nancy Pelosi's returns, and her husband's?  How about Chuck Schumer's?  The partisanship is so obvious it's blinding . . . except to the mainstream media, of course, who wouldn't recognize bias if it jumped up and bit them in the ass.

I note there's even an attempt by some states to flout the Constitution, by passing laws preventing a Presidential candidate from appearing on the ballot in their states unless and until his/her tax records have been made available.  Sadly for them, the Constitution has already defined the prerequisites to run for President, and provision of tax information is not one of them.  No state has the right to pass laws binding on the Federal government, or to supersede Constitutional requirements with its own, different standards;  so all such laws are virtually certain to be overturned in court.  Nevertheless, the fact some politicians would even try to pass them tells us all we need to know about their respect for the Constitution they've nominally sworn to uphold and defend in their oaths of office.

I think this old saw, that recently reappeared on Gab, isn't a bad response, either.  Clickit to biggit. 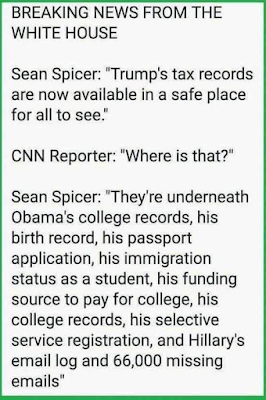 They demand tax records, but refuse to look at birth certificates.

So let's say several states decide to leave Trump off the ballot. The lawsuit starts at each states civil courts, works its way up to that states supreme court, transfers to a Federal court, then goes up to the supreme court where the law is declared unconstitutional. The Supremes demand a new election, but leave standing everything done through both of Bidens terms. The 2020 elections are required to be re-held, but nothing done in the intervening 8 years is voided. That takes a separate suit. In 2036 all the issues are settled in a 9-5 ruling with the newly enlarged liberal wing of the court supporting President Harris.

What could go wrong?

Remember back during the Obama years, when congress suddenly and loudly, passed a law that prohibited themselves from insider trading? They did it while nobody else in the country could do it. Then, when the cameras were off looking at another shiny thing, remember how they quietly repealed that law so they could trade on insider information again?

Pelosi was a nobody before getting into congress, now she and her husband are worth hundreds of millions. That same story is the case for dozens (hundreds?) of them.

However, these requirements don't have any effect on somebody running for president, just whether they are on the ballot for a state. And states have the ability to determine who is on the ballot (just ask third party candidates to learn how difficult it can be).

Remember that there is nothing in the Constitution that requires a state to hold a presidential election. Constitutionally the state legislature can choose the electors by any means it wants to.

@Thomas W: Yes, but if that state allows others on the ballot, then an election has been held; and by preventing one or more candidates from participating in that election, it is no longer free and fair. Any candidate so excluded would have an excellent case to present to SCOTUS, alleging unconstitutional discrimination.

If, on the other hand, the state eschews a Presidential election altogether, and nominates a candidate by some other means, then all potential candidates must also be considered, for the same reason; otherwise, whatever method that state selects will also end up before SCOTUS.

@Peter: Perhaps. But states prevent candidates from getting on the ballot all the time. I've heard of a case where state officials had to contact the Republicans in one state and remind them they had until the end of the day to put their presidential candidate on the ballot.

So the question is whether a candidate releasing tax forms is as valid a requirement as some number of petition signatures.

@SiGraybeard, do you remember when that was about the insider-trading repeal? I want to look into that.

Your comment about net worth of Pelosis is also interesting. Is there a website tracking that over time? I'd be very interested to see that for other Congresspeople, too.

What do these people expect to FIND? Trump is audited, as a matter of routine, every single year, like every other person in his bracket. He has the money and the smarts to hire the best tax guys in the country to do his taxes. Do they really expect for some Woodward-and-Bernstein type to suddenly go "AHA! HERE is the payments he got from Vladimir Putin!"

I'm not honestly a fan of the man, but I hope he wins in 2020 the way Johnson did in 1964...an utter landslide. And running against some of the nutcases you find in the "Democratic" "Party," it wouldn't be too hard.

Obama did release his birth certificate which was identical to my sister's (my Dad was stationed at Barber's Point at the time and she was born at Tripler Army Hospital). But even if he was born in Kenya his Mother was an AMERICAN CITIZAN which mad him one too no matter where he was born -- something "birthers" seem to forget

You have overlooked, or just ignored, the fact that ALL of his hidden records were given that status to hide the possibility that he might not be authorized to run for Prez (must be born in the US), not that he wasn't a US citizen. That HI birth certificate certainly appeared to be an after-the-fact fabrication, just for starters.