Just how much did that cup of coffee cost?


I'm amused at the brouhaha over the allegedly "accidental" placement of a Starbucks coffee cup in a scene from the latest Game of Thrones episode. 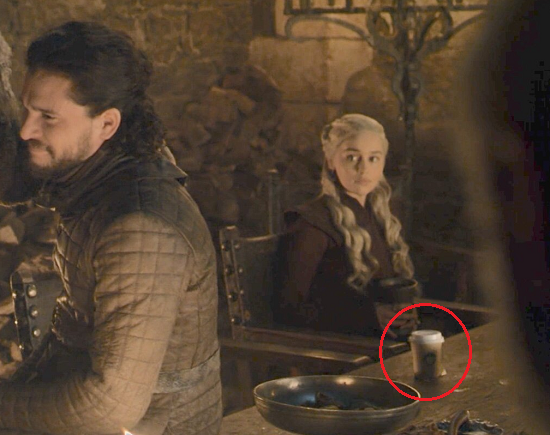 Do you really believe that happened "accidentally"?  Do you really think that cup happened to "just end up" in the final season of what may be the most popular HBO show ever, in absolutely plain sight - not hidden behind anything, or in a place where it might have been overlooked?  Do you think that happened despite all the continuity staff's precautions, the most experienced crews in showbiz, and all the measures against things like that going wrong?  I don't see it.  In particular, if it was accidental, why have no heads rolled for so egregious an error?  Surely those responsible would have been fired?

I'd love to know whether there was a large, unexpected payment from Starbucks to HBO before or after that "accident".  Starbucks has received so much "free" publicity from it that the company could afford to pay for the world's most expensive advertisement, and still make a profit . . .  The cup has already been digitally removed, but not before Starbucks got the benefit of all that publicity.

EDITED TO ADD:  Aesop disagrees with my perspective, speaking from his own (hilarious) experience. For example:

I get what you're saying, and I'm not opposed to it. But in this instance, I'd be willing to be Occam's Razor applies... especially as one who enjoys seeing the "behind the curtain" moments in movies. For instance, in the blockbuster film Gladiator, there is a scene in the Colosseum where a chariot flips up in the air and you can clearly see the gas cylinder that was rigged to cause it to flip. In LOTR, there is a scene in the shire where a car is briefly visible. There are lots of these types of continuity errors in almost every movie. Most are caught in the editing room, but some slip through no matter how hard they try.

The other reasons I don't think it was intentional are a) Starbucks doesn't need the publicity, b) HBO is a subscription service you have to pay for, so no advertisements, and c) with as much brouhaha as there has been surrounding this show since day 1, I don't think they would intentionally do something that doesn't fit within the "historical time period" the show is supposed to be set in. (Obviously there has never been a time in history where we had ice zombies, dragons, and legitimate age-altering magic, but it's obviously set in a pre-industrialized age civilization.)

Further, do you think none of the actors and actresses on the set noticed it during the shooting??? I mean the intelligence of Hollywood is always a running joke, but surely...

No, I suspect the truth is more along the lines of a bored digital editor editing it INTO the picture post-production as an 'Easter Egg'.

Bear in mind I've only done 20-something years in Hollywood.
You could strafe every movie lot in Hollywood with miniguns, for days, and never, ever hit anyone smart enough to earn a Ph.D.

Then remember the stupidest things these geniuses say and do when they put on their 0-diopter glasses to "look intelligent", and bear in mind this is when they're trying to look bright.

Now imagine them on the set, in hour 14 of a 16-hour day, amidst an 80-hour week, on take 9 of a complicated scene, on a set teeming with extras pulling down minimum wage and a bologna sandwich.

The miracle isn't that there was a Starbuck's cup in a shot; it's that there isn't one in every shot.

Go back and watch Twister sometime: in the opening sweeping shot after the flashback, as the camera zooms across the fields of Oklahoma to Bill Paxton's truck, and notice that right on the front quarter panel, you see a beautiful full reflection of a Bell JetRanger, with the cameraman hanging out the door filming the scene.
In a movie directed by a well-acclaimed former director of photography.

Watch Pretty Woman, in the scene where Richard Gere and Julia Roberts are meeting Ralph Bellamy for dinner, and watch the sorbet cups appear, disappear, reappear, magically refill, disappear, then come back again.

And a million other goofs, flubs, and such.

In the silent version of Ben Hur, they ran over an extra with a chariot. Killed him deader than canned tuna.

In Last Of The Mohicans, one of the special-ability extras firing a black powder musket fired a ramrod into another actor. The target actor survived, after they pulled three feet of steel out of his body.

In Twilight Zone: The Movie the entire production staff conspired to set off explosives under a low-hovering helicopter, lied to the parents of the kids in the scene and the fire marshals watching the stunt, then lied their asses off in court, after they'd killed Vic Morrow and two kids.

The producers were on planes to Acapulco within a half an hour, out of subpoena range and unable to be extradited, until the movie wrapped.
And nobody went to prison for three counts of manslaughter.

This is Hollywood, 24/7/365.
Better than your family home movies? Certainly.
Safer than the drunk redneck who says "Hold my beer!"? Most days, but not by much.
Flawless production geniuses?

Stop.
My sides are splitting.

And BTW, nobody gets fired for something like this.
They get thanked at the end of the day, and the next day, their name isn't on the call sheet anymore.
It's called "employment at will".
(If it was talent, their pay gets docked for the cost of the digital removal. And they get a rep with the entire production crew as dumbasses, and they're watched like a hawk watches prey, lest they screw up another shot. Ask me how I know.)

Stars and directors have died during productions, and they worked around that.
No one on set is irreplaceable.

The Starbuck's cup?
Small potatoes.
You have no idea about even 1% of what goes on.

Close-up of the text on that Starbucks cup

A Moose bit my sister once...

It was done on purpose... LOL And as Aesop said, NOT the first time things like this have happened, nor will it be the last. Easter Eggs are a 'thing' in Hollyweird...

It may have been a mistake, or an Easter Egg, or whatever, but I can tell you one thing:

Starbucks is going to have a hell of a Superbowl commercial next year if they piggy-back off this. I'm picturing whole battle scenes licensed from HBO with Starbucks cups digitally inserted everywhere...

Aesop's point: the best description of an active set is "somewhat orderly Brownian motion." Lots of people doing lots of tasks independently to support a common goal within a finite and very limited time slice that's very expensive per minute. Mistakes get made, but they're usually small, the big ones do get re-shot (except, maybe, for the jet contrails over John Wayne's shoulder while he's sitting on a horse in 1855.....(in "The Cowboys") because there was no way to get the actors back to re-shoot it later). Watch firearms in TV and movies, with particular attention to where the hammer is; ex: TV show "Life", first episode, Damian Lewis fires 2 rounds with a Beretta 92 after which the hammer is down; scene change, camera move, continuity fail. Ooops. S#@t happens...

The 3rd string script intern or coffee gopher may see the helicopter reflection in the truck fender but has no way to communicate that to the director and even if they did would suffer "career impediments" for doing so, inflicted by lots of folks operating below the director's level who might suffer the impact. Same thing for the lead script supervisor or head gaffer.

Kinda like the newest engineering records clerk in Boise pointing out to the IBM CEO in NY that giving Bill Gates full ownership rights on DOS is a mistake. If you're going to step on your genitals best to not be wearing golf shoes at the time.

I've long viewed theatrical performances with an eye to product placement. Is that Coke can on the table between Bosch and his daughter coincidence or did $10-20K change hands to get it? That's extremely cheap advertising. Does anyone on Boston Legal use a brand of laptop other than Apple by sheer coincidence, or did Apple just happen to send them some laptops in the same box as the check? That "certain half hour show with Charlie Sheen" was famous for brand name dropping, paying the lead actor $1M/episode had to be covered somehow; theatrical productions cost big money and can be supported from numerous revenue streams.

The coffee cup was not coincidence, and neither is the multi-day discussion over it.

The fault is in their Star(buck)s.