Ebola: the numbers tell their own story


The grim statistics of the current Ebola outbreak in north-western Congo are, frankly, horrifying to those who know the disease, and know the area.  The Telegraph reports:

According to the DRC Ministry of Health, 1,008 people have died from the deadly virus, including 942 confirmed deaths and 66 probable. There have been 1,529 cases since the outbreak began last August - less than a third of those infected have survived.

On Tuesday, the DRC's Ministry of Health confirmed that 26 people had died from the virus – the highest death toll on a single day. And with 126 new infections reported, this week has seen more cases than any other since the epidemic was confirmed in North Kivu last August.

April has also been the worst month of the outbreak to date, with 406 cases reported. This month alone would constitute the third-largest outbreak in history, according to the US Centre for Disease control and Protection. 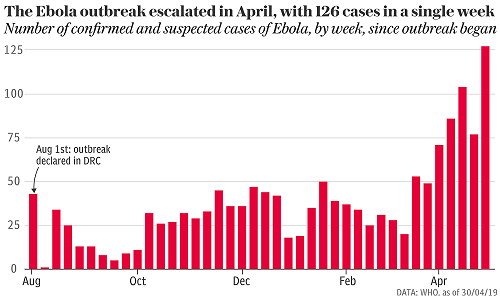 “The numbers are nothing short of terrifying, with children accounting for a third of all diagnosed cases and more deaths than any other Ebola outbreak in history, bar the West Africa epidemic,” said Dr Jeremy Farrar, director of the Wellcome Trust.

“But there can be no doubt that the situation is escalating towards those terrible levels.”

There are also concerns that the epidemic might have crossed international lines, with Uganda on high alert following the death of a potential Ebola patient. The current outbreak is close to the country’s border, which hundreds of people cross every week.

Mistrust has hindered efforts to rapidly contain the highly contagious disease, with a quarter of people in the region believing that the Ebola virus does not exist. Others have accused the authorities of fabricating the outbreak for political gain – voters in the region were not able to partake in national elections in February due to the crisis.

Violence is also rife. The area surrounding Butembo has been at the centre of conflict for more than two decades, and over one hundred armed groups are in operation in the region.

There have been 119 separate attacks recorded against Ebola workers or operations since January, according to the WHO. Health workers have been wounded or killed in [some] of these 85 incidents.

“Every time there is a security incident, essential response activities are suspended for an indefinite period, giving time and space for the virus to further spread in the community,” Dr. Oly Ilunga, the DRC's Minister of Health, told The Telegraph.

The recent spike in cases is in part because efforts to control Ebola were temporarily halted following a string of attacks on treatment centres, threats against health workers and the murder of a WHO epidemiologist.

Look at the spike in reported cases since April, in the graph above.  That's after the renewed violence hit, and Ebola treatment centers were targeted.  What's even worse is that those are only the known cases.  As I've pointed out before, in the thick bush and equatorial forest of those regions, I won't be at all surprised to find that the actual number of cases (and fatalities) is three to four times higher than reported.  It might be ten times higher, for all we know.  The terrain is simply impenetrable to any Western standard of epidemiological medical care.  Vehicles can't get in, supplies can move only on people's backs or on pack animals, they'll almost certainly be stolen or destroyed before they get where they're needed . . . it's a nightmare out there.

If I were the Ugandan, or Rwandan, or Burundian, or Kenyan health authorities, I'd be getting very little sleep right now, and my hair would be turning gray with worry.  They've already got refugees flooding in from the infection zone.  The disease could arrive with them at any moment - and there's damn all the local authorities can do to stop it.

Oh - and guess what?  Some of those refugees are coming here, too.  They're sitting in Mexico right now, waiting for transit visas - and that's only those who are actually waiting to do it quasi-legally.  Others haven't bothered, and have already crossed into the USA.  The current Ebola outbreak has an incubation period of up to 21 days.  With modern air travel, a refugee from the infection zone could take less than a week to fly from Africa to Mexico, and arrive on our southern border.  By the time he or she shows visible symptoms and is diagnosed with Ebola, they might have been smuggled all the way into a major US city.  If that happens . . . hell's coming to breakfast.

And most Americans don't bat an eye because they are unaware.

It is horribly unfortunate, but the most viable solution is a complete quarentine of the area until the people on the ground take care of the situation themselves. Taking away the option of running away might mean that the locals deal with the situation themselves since they have allowed the international community to be kicked in the face. In the end local problems must have local solutions

That spike in cases is very scary. With 126 cases reported, most likely 4-10 times that number hiding due to the violence, this may be the beginning of the final round of 'localized' infection. We are now in the beginnings of the break-out phase, darned it. Which is the very un-fun part.

I wonder whether the US authorities would suppress knowledge of a case or two here. You know, so people "don't panic".
If they did, even with the facilities to treat the dying they would be playing eternal catch up.

As Peter has pointed out before the number of certified Bio hazard 4 beds is about what you can count on your fingers and toes (and you could even have a couple toes missing). On top of that modern US professionals do not train for highly infectious diseases. They may understand them clinically and do exercises about them from time to time, but their actual experience is effectively zero. Even AIDS which was probably the most lethal pathogen they dealt with regularly can now be controlled. Health folks of 75 years ago understood, They had TB, smallpox (rare but still out there even in the US until like the 40's), polio, and several others. They knew to quarantine early and at any suggestion of the danger. With the long incubation it makes Ebola tricky. Other hemorrhagic fevers tend to show the more obvious symptoms (massive bleeding, odd bruising) early. By the time you see that in an Ebola patient they're already a mass source of virus. It's a darn good thing (thank you lord for your mercy) that it's transmission is not easily airborne. If it was this would make the black death look like a Sunday picnic.

todays american leftists and the wealthy are totally self-centered and completely arrogant about the "no, not my problem" attitude towards a disease such as ebola or marburg. is there some thing about them that would lead anyone to believe that any leftist democrat or wealthy person would actually obey a an isolation or sequestering order in this environment?
one infected cell of blood, even dried blood, will lead to infection.
these virus turn your entire body into a mobile virus manufacturing and distribution center. with a 70% kill rate, these virus allow for survivors to go on infecting after recovery, starting the cycle of infection and death all over again. perfect.
systems to control the flow of people and animals from infection zones exist yet political expediency prevents using them. ebola and marburg are perfect infectious agents in the modern world. our transportation systems and the free flow of people worldwide is creating conditions for epidemic spread that even the most notorious fiction writers-with few exceptions-would emulate as a plot line. Zombies, oh my...
Mother nature can alway come up with something quicker to eliminate humans than global warming. you all got something worse to worry about now.

I was actually able to find an interview with a guy from that part of the Congo who is currently down in Mexico, trying to get to the US. So, yeah, they're over here already. It's the elephant in the room.

Not too concerned. The usual pattern of this disease is that it
sprouts up and kills a few hundred people and then goes dormant
until the next season. I hate to sound like an elitist, but most
of the infected people are not world travelers.

Dr. Dean Edell dismissed the notion of an Andromeda Strain or the
Dustin Hoffman Outbreak scenario because anything that virulent
and fast would burn itself out in short order.

If anyone has not noticed, everyone treated in America has survived!

All ten of them. But it was pretty hard on the Dallas hospital, and the two nurses that were infected there...

Half the people who get this strain don't have a fever. That's pretty significant in terms of detection and preventing the spread.

The only thing slowing it this time is ring vaccination with an experimental drug. Are YOU willing to vaccinate your kids with that?

Points of order, Tregonsee:
1) With all modesty, I pointed out the number of BL-IV beds, going back to 2014; Peter has been kind enough to repeat, excerpt, and link to my posts on numerous occasions since then on the topic.
http://raconteurreport.blogspot.com/2014/10/do-math.html

2) In the current outbreak, 50% of those infected show no fever whatsoever, even during full-blown infection.
Fever is the only thing airport personnel are screening for to prevent infected persons from entering aircraft, and other countries.
See if you can guess how that will end for people on flights out of DRC, and at the other end of the air pipeline from Ebolaville.

3) Ebola is contact and droplet precautions; the distance a droplet of infected blood can be sneezed is north of 8 yards, and the droplets remain floating in the air for up to 10 minutes.
That's neck-and-neck with the mechanism and spread of TB.
(Bonus prize: How many seats are within 8Y of any other seat on a modern airliner?)
And Ebola patients at any stage more than mild and newly-infected are typically sneezing infectious material, projectile vomiting it, and shooting diarrhea out of their other end.

This will go from bad to horrific in short order.

Having worked in a hospital, I can assure you that the answer is "duh".
The CDC stated that there were no cases of Creutzfeldt-Jakob disease in that state.
I knew of three in the immediate area. I was in no way involved with patient care or trying to sanitize that mess. In all likelihood, the actual number was significantly higher.

People want to believe that pestilence has been defeated.
And our government is happy to let them.

A few folks trying to cross the boarder? Wait til Ebola shows up in the slums of Mexico City and a million infected people head north.