So true it hurts 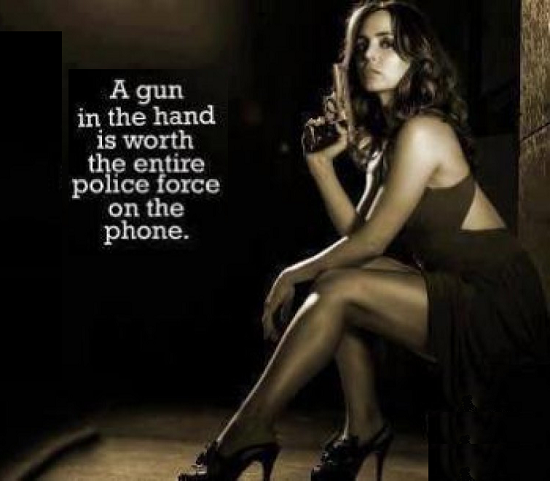 That reality is why a lot of people buy guns every year, and learn how to use them.  As a former part-time firearms instructor for disabled students, I'd say well over half of those I trained had bought a gun because they'd been the victims of crime, and were determined that they wouldn't be helpless victims again.  So far, a number of my former students have had to use their weapons to deter criminals, and three have had to actually pull the trigger.  All three are still alive, uninjured, and happy to be that way.  Their attackers . . . not so much.

Look up the average response time for police in your area.  It's usually in the five to ten minute range, although in rural areas it can be several times that.  (If your local law enforcement agencies won't provide that information, their performance is probably worse than average.)  Now, imagine how much damage an intruder can do to you (and your loved ones) while you're waiting for help to arrive.  To inflict crippling injury or death can take only a few seconds.  Having a weapon, and being trained in using it to defend yourself, is a vastly better option for everyone except your attacker, IMHO.

When seconds count, the police are minutes away...or in my current rural home, they’re a one hour code three response away.

I was staying at home while my parents were out of town. The house is 1000 feet back and not easily visible from the main road.

I had occasion to call the police about a prowler (or prowlers, as it turned out) situation. Forty-five minutes later the police call back. They can't find the house.

The situation resolved itself in 20 minutes, and that was that. I told not to bother, they weren't needed.

I live on a farm. Two men in their 20's came on an ATV and attempted to break in my neighbor's cabin up the hill just after sunset in the rain. I called 911, then ran up there myself to chase them off, and off they went. 42 minutes later the police came.

Response time is immaterial, if they pull a Broward(coward) County routine. My neighbor's 11 year old daughter called 911 about a gang breaking into the house. They showed up code 1, hid in the surrounding neighbors yards, and waited for them to exit the house.

This, while they were trying to break down the internal door they knew she was hiding behind.

Of 3 gangsters, one fell into someones pool, one required a dog to find, and the third one just walked down the sidewalk and disappeared (different race and sex).

The typical burglars borrowed kitchen knives were found tossed in the yard.

How do I know it was a Code 1? Sirens would have woken me up, and lights would have chased them away too soon.

I no longer have any respect for these clowns. Worthless.

I should clarify my statement of "worthless".

If I had not left my phone in another room, I would have been entering and clearing my friend's house as quickly as I could jog across the street. By my self. The cops wouldn't do it, even as a group, wearing body armor.

I explained to my friend that if I had done a house clearance, that due to the tight floorplan and multiple opponents, there was a high likelihood that some of the BG's would have died as a result. He was fine with that. He was REALLY pissed that the cops didn't bother to help his daughter.

No guns in his house, as he is an immigrant Leftist. (But, he's willing to call people with guns to come help. Me, and the police.)

I have lived in various rural locations in Missouri and Kansas for about 50 years (including one two year stretch just off a major north/south two lane highway) and have never had a problem with intruders. Of course we usually had at least one big indoor dog -- usually a herding breed of some kind (Belgian Tervuren, Border Collie, etc)

I lived in a rural Kansas community the response time for sheriff office was measured in hours. You could see the Sheriff's deputies cruised within 15 to 20 miles of the county seat. As we were 45 miles from the county seat you can guess how often we saw them cruising/patrolling the paved roads in our corner of the county. I always thought our taxation for support of the Sheriff's Office should be based on the support given, which would have meant we wouldn't have spent more than a buck or two a year.

Thank God, the local volunteer EMS lived around the corner and members of the volunteer fire department could be found at the saloon at the end of the block.

Live in rural West Texas mountains. Sheriff is at least 30 min. away from apprehending a perp, and that's optimistic, maybe even a pipe dream. But the perp is much less than a second away from meeting his maker.

One of the odd circumstances associated with that burglary/home-invasion was that about 3 days prior I had a sudden overwhelming urge to strap on a gun. To the point that taking it off for a shower had me feeling quite anxious. So much so that I slept with it on (small shoulder rig). This urge abated after the incident.

Premonition?
It reminds me that there have been various incidents in my life where strange things and odd choices or actions on my part have been a life saver.