A snappy answer to a stupid question 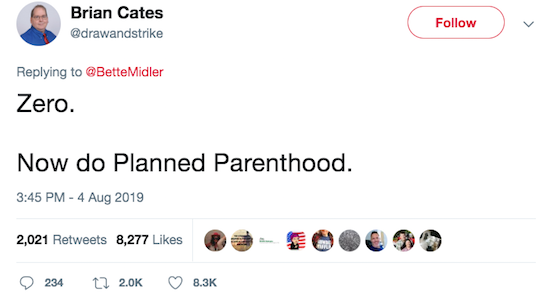 Says it all, doesn't it?  The perfect answer to a demented leftist's refusal to face reality.  Sadly, comparing the likes/reposts/etc. of the two tweets shows the dominance of left-wing thought on that particular channel.  It's no wonder so many conservative and right-wing voices are being banned from it.  Its denizens simply don't want to be challenged by any view different from their own.  They want their own insular echo chamber, nothing more.

Speaking of refusal to face reality, astrophysicist Neil deGrasse Tyson ran into that when he tweeted last weekend: 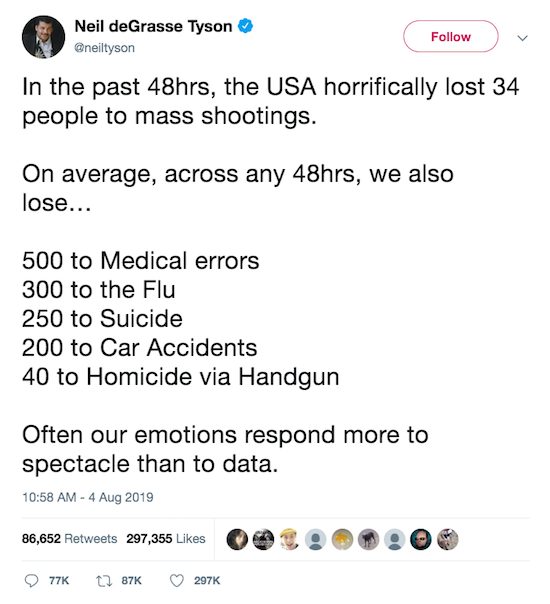 That's a perfectly valid point, truthful and unarguable - unless you're a leftist wanting to use the twin tragedies in El Paso and Dayton as propaganda fodder.  He was pilloried in the mainstream media and progressive commentaries, because he wasn't "getting with their program" and blaming those they want to demonize.  Instead, he pointed out the sober reality of the matter.  For that, he has my thanks, and my respect for being willing to take a stand for the truth.

What's the old saying?  "There are none so blind as those who will not see."  Looking at all the progressives trying to make hay out of last weekend's mass shootings, it's eerily descriptive of them, isn't it?

They don't want to see, because it goes against the agenda... Dammit...

I now have one (1) scintilla of respect for Tyson. Surprised, I AM.