That must have been... interesting! 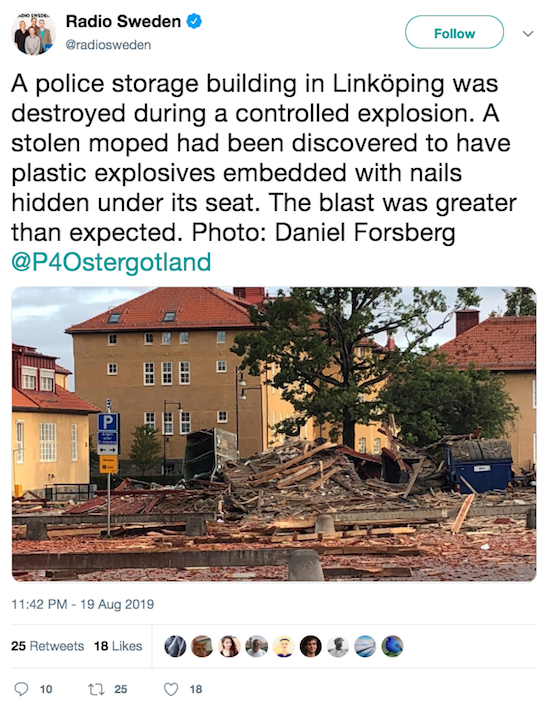 A Swedish police warehouse building in Linköping was destroyed after the bomb squad detonated a motorbike filled with explosives.

The moped containing what has been described as some form of plastic explosive covered with nails was discovered on Monday afternoon by officers in a stolen property room, and led to the evacuation of around 170 personnel from the area, Swedish broadcaster Sveriges Radio reports.

Following the evacuation, the Swedish bomb squad was called in to make a controlled detonation of the explosives but, according to Sveriges Radio, something went wrong with the operation and a much larger blast than expected took place.

Police spokesman Erik Terneborn admitted that the detonation, “did not go quite as one had hoped” but said the officers had taken such a scenario into account when they evacuated the area.

The building was totally demolished and windows in nearby properties largely destroyed, but no injuries to officers or civilians have been reported.

Linköping seems to have a high explosive problem at the moment.  Another explosion there in June blew out the windows of an apartment block and caused extensive damage.

An examination of the city's immigrant statistics suggests a possible explanation, much as parts of Malmo have been described by police as "especially vulnerable" due to drug-dealing and gang violence.  Swedish media are, of course, particularly prone to political correctness, so they seldom admit that most of that sort of problem is driven by "refugees" and "immigrants", even though it's common knowledge among Swedes and the subject of frequent controversy.

Must be those rampaging Swedish Lutherans, I suppose . . .

That is an oopsie, for sure. I wonder what went wrong? Was there a gas main they didn't know about?

And speaking as someone raised Lutheran, you gotta watch out for them Lutherans, man. They'll cut ya soon as look at ya. :)

Is anybody other than muslims pulling this crap in Sweden? Asking for a friend. It is a war, and the Swedes and the rest of the Western world are in it, neck deep.

Well, besides all this happy fun, grenade attacks, yes, grenade as in 'When the pin is pulled, Mr. Grenade is not your friend,' are on a steep rise.

Damn those blond haired viking people for throwing grenades... wait, what, it's muslim immigrants, umpossible, the Swedish government tells us that the muslim immigrants are a vibrant and lively addition to Sweden.

Gee, it must make the average Swede wish for more boring times.

A detonation is an explosion that happens faster than sound. They used that word a lot in the article...

I suspect that the bomb squad overlooked additional explosive hidden inside the bike's structure. There is a surprising volume of space inside mopeds and motorcycles that are not readily visible to a quick look.

This includes inside the engine and fuel tank, the frame and tires, and other smaller objects that can add up to quite a large capacity for noise-making. And it all would produce lots of flying fragments. Virtually every part of a bike could hold some explosive, and the wiring harness goes to all, or nearly all, or nearby all of it.