...and I bet none of these guns will ever hurt anybody


Amid all the leftist hoopla about how nasty and scary and deadly guns are, and how we should restrict the living daylights out of them, it's nice to be reminded that in very large parts of this country, they're regarded with nonchalance as a routine part of everyday life.  They're seldom used to harm anyone - they're much more likely to be used to put food on the table.

(Of course, if the need should arise to protect others from harm, they'll do that job, too.  As an illustration, a carload of gang-bangers from a big city some hours away decided to rob a small town's independent pharmacy of all the "good stuff" they could find.  As they pushed their way in, waving handguns, one of the staff slid out the back and called, not the local police department, but her father.  He grabbed his trusty old Winchester .30-30 and headed for the pharmacy, while both she and he called others.  Within minutes, 20 to 30 fine, upstanding local citizens had surrounded the place, all carrying deer rifles or shotguns, itching to get at the thieves.  The entire local PD, and a couple of sheriff's deputies, were stretched to the limit persuading the locals to please, pretty please, let them handle this one?  Once the bad guys saw what was waiting for them, they couldn't give up fast enough - a very wise decision, IMHO.  Small town America looks after its own.  Yes, I know that particular small town, and I know some of those involved in this incident.  They still bitch and moan about the PD and the Sheriff's Department "keepin' all the fun to themselves!")

When I was an active small-town pastor, I used to raffle off a hunting rifle or shotgun every year, near the beginning of hunting season, to help raise money for the church's needs.  There was never even a murmur of dissent from the congregation, who enthusiastically sold tickets all over town;  and I never heard that the annual winner ever used his new gun for anything except its designed purpose.  With that background, I was therefore happy to come across this fund-raising raffle from a small town in northern Texas.  Click the image for a larger view. 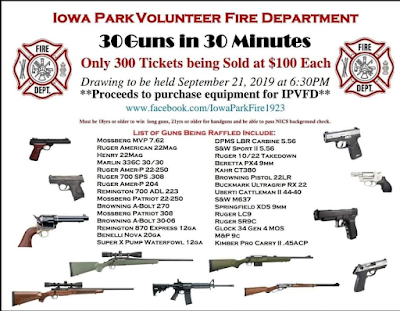 It's an annual event, and I understand it's well supported.  They sell only 300 tickets, at $100 each, and you have 30 chances to win a gun with each ticket - pretty decent odds, when you think about it.  (If you're interested, contact the IPVFD at the Facebook page listed on the flyer.)

This sort of raffle is common in much of small town America, and I think that's precisely as it should be.  Volunteer fire departments - the only kind there are in much of rural America;  more than two-thirds of US firefighters are VFD members - have to raise their own funds to a large extent, so they use whatever methods have a proven track record of success.  Winners have to pass all the usual legal requirements to collect their gun(s), including a background check, so it's not as if criminals will be able to pick up the tools of their trade through such competitions.

I think such events help to de-mystify guns, taking away the "Eeeewwww!  Nasty!" or "Ooooh!  Scary!" connotations so many people seem to associate with them.  To my mind, that's a good thing.  They're just another tool in the toolbox, like a hammer or a drill;  or they're a sporting implement, like a baseball bat or a fishing rod.  Raffles like this put things in proper perspective.

"What will you do with it?"

"Well, really, most of the time it will just sit there. Once in a while it will be a really loud paper punch."

"If need be. Hopefully that will just be showing I have it. I don't WANT to fire it at anyone - but if I need to do something that might give me nightmares... at least I'll be alive to HAVE them."

As for the raffle, most of the listed firearms run somewhere between 400 and 800 dollars, a few less and some listing for more.
I expect several may have been donated or at least provided at cost, so just a guess, but I suspect the fire department cleared at least $20k on the event out of $30k tickets sold.

The story about the small-town pharmacy reminds me of where I went to college. Northfield, MN---site of the James Gang's biggest defeat. They went out of their usual turf to rob a bank up there, and found out that the locals:

A) Were NOT sympathetic
B) Were heavily armed
C) Were pretty good shots.

Same sort of thing happened in Coffeyville, KS, when the Daltons had the bright idea of robbing two banks at once. The whole town turned out, guns in hand (a local hardware dealer was handing them out, saying "Go get the robbers, but bring these guns back, y'hear?") and the Daltons got good and riddled.