Today's award goes to actor Alec Baldwin for this tweet about the death by suicide, while in prison, of Jeffrey Epstein: 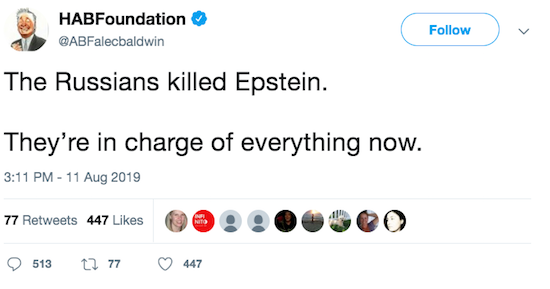 He shares the award with Ron Perlman, Brian Koppelman, Dave Bautista, George Takei, and probably others in the Hollywood kafeeklatsch, all of whom also inferred a Russian hand of some sort in Epstein's death.

I agree that Epstein's suicide was, and remains, highly suspicious, with enough grounds for doubt as to what happened to keep us guessing for years to come . . . but Russia?  Really?  I'd have thought there's nothing Russia would have liked more than to have Epstein's "little black book" (and video recordings, audio recordings, letters, and other compromising material) throw politics into disarray in the USA and other countries.  His death has largely derailed that possibility, absent the discovery of his stash of "If-you-come-for-me-I'll-take-you-all-with-me" evidence.

The same "Russians" as killed Seth Rich, and how many other Clinton associates?

One thing I've noticed in the comment section at GoComics is that some people react to anything, no matter how non-political and non-topical, with "Aaaaah! Trump Treason Russia Russia Russia #TraitorTrump Eleventy!!!!"
Curiously, unfiltered comment sections in certain places tend to attract old-school antisemites, and the symptoms of TDS and of traditional antisemitism look remarkably similar: the words change, slightly, but the tune is nigh-indistinguishable. (Grievance Studies seems to fit the pattern too: if someone remarks that the sky is blue, inveigh against the white cishetero patriarchy. The oppressive Other is to blame for everything, and the Forces of Snowball sabotaged the windmill.)

At least they've gotten off the "George BOOSH!!!" bandwagon.

I'm willing to believe that there are many powerful people that had equally good reasons to celebrate Epstein's death.

I'm not believing it's a suicide.

Whatever happened at that jail, the ONE THING I'm certain of, is we (the public) will never be told the truth....

Ooooh. ALEC Baldwin. I thought it was Adam Baldwin trolling.

Exchanging my tinfoil hat for one made of pure beryllium foil, I now discern the true dark secret behind all of this.
"During this time, the form of flesh known as Jeffrey Epstein was being energized by none other than Gharlane of Eddore!"
It was awfully foolish of him to have a close associate called "Ghislaine." To those of us who possess the beryllium, that's a great big clue!

I'm thinking that he thinks it as funny as I do. After all, it is a joke meme doing the rounds.

This is interesting:
The autopsy of Jeffrey Epstein revealed he had several broken bones in his neck consistent with but, not conclusively proving strangulation.  ...

The TDS bandwagon is the BDS bandwagon with a new paint job, pulling a string of broken down clown cars.