Happy book news - and another new book is out!


Last night was celebration time for Miss D. and myself.  "Taghri's Prize", my latest novel, has been on sale for just nine days.  As of the time of writing, it's hit #1 on Amazon's Hot New Releases list for Historical Fantasy! 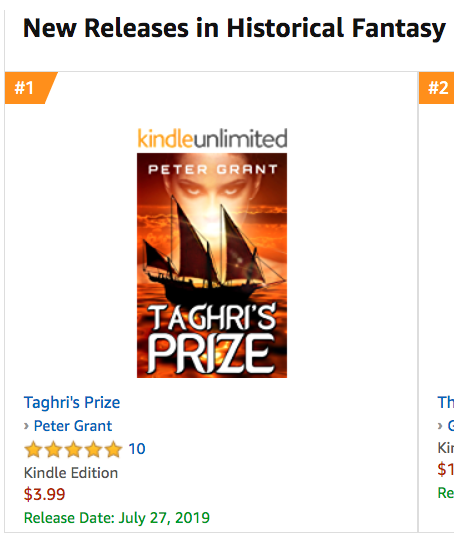 That's the first time I've reached the top of any Amazon book ranking list. Color me happy! Thank you very much to all of my readers.  Your support made this possible.

Of course, the book won't stay that highly ranked.  The Hot New Releases lists change almost by the hour, so by the time you read this, "Taghri's Prize" may be ranked differently.  Nevertheless, I'm very happy with progress so far.  I'd feared I might face an uphill battle to re-establish my readership, after a year-long layoff due to ill health.  Fortunately, it looks like most of my readers have stayed with me, and are still willing to buy my books.  Believe me, I'm grateful!

I'd like to ask a special favor, please.  If you've read "Taghri's Prize" (or any of my books), would you please leave an honest review of it at the book's page on Amazon?  Potential customers rely on reviews to guide their buying decisions.  The more there are, the better understanding they'll have of whether the book will appeal to them or not.  The new book has ten reviews, but it's sold hundreds of copies.  I'd love to see all those readers leave reviews!  Thanks.

Today (August 6th) sees the launch of a new anthology set in Tom Kratman's Carreraverse.  It's titled "Terra Nova:  The Wars of Liberation", published by Baen Books.  I'm one of the contributors. 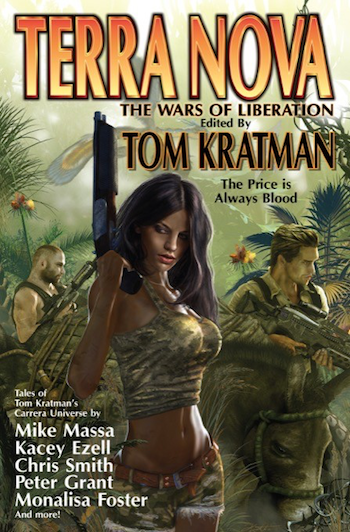 "Send us your tired, your poor," says the inscription at the base of the great statue, "your huddled masses yearning to be free."

But the future of the colony planet, Terra Nova, and its relations with Old Earth is far more a case of boot out your tired, your poor, your dissidents and troublemakers. Use us for a dumping ground for all your problems. Go ahead and abandon these here. This may have been fine, too, but for the UN and its corrupt bureaucracy insisting on maintaining control and milking the new world and its settlers, willing and unwilling both, bone dry.

Contained herein are tales of the history of Mankind's future first colony, from the first failed attempt at colonization, to the rise in crime, to the rise in terrorism, to its descent into widespread civil war and rebellion...and ultimately liberation. As with most of human history, this history is messy, with good men and women turning bad, bad men and women inadvertently doing good, and blood flowing in the streets.


I had a lot of fun writing my contribution to the anthology.  I hope you enjoy it.  It's a different twist on what can drive men to fight . . . and how the defense of freedom is a constant, anywhere, at any time.

The third volume in the Ames Archives series of Western novels, "Gold on the Hoof", will be published later this month.  I'm hard at work on the third and final volume of the Laredo War trilogy, titled "Knife to the Hilt";  the sixth volume of the Maxwell Saga, "Venom Strike", is about four-tenths complete;  and I'm preparing an omnibus volume of the first three books in the latter series.  I'm also working with Tom Kratman on a joint novel that should come to fruition, God willing, by next year.  To cap it all, I'm preparing print editions of "Taghri's Prize", the Cochrane's Company trilogy, and the new Western.  All I need now is time to eat and sleep!

I saw Taghri's Prize advertised on Instapundit yesterday. You are getting some good press.

Congratulations! Next on my read list is your novel.

I'm 70% through Taghri's Prize, an excellent read. Will file review when I finish.

Now I know where my extra money is going!!