Animals and war - still needed after all these years


I was interested to read that Chinese soldiers in Tibet are using an ancient means of transport to patrol their area of responsibility.

Chinese media has, since the 1960s, regularly featured stories of the harsh conditions soldiers face in Tibet and Xinjiang, the two western provinces that border the Himalayan and Pamir Mountains as well as the high-altitude borders with India, Pakistan and Tajikistan. In effect China has the longest high-altitude borders in the world and uses a variety of methods to effectively patrol them and control smugglers and other illegal border crossers (like Islamic terrorists).

For most of the border troops on foot, vehicles or aircraft can keep an eye on things. But in some of the more remote areas the smugglers use yaks, a sure-footed high altitude animal native to these areas and used by the locals for thousands of years. That means local smugglers use them as well. So the Chinese maintain several units of border troops who are trained to ride yaks though the same border areas the local smugglers still use. This does not completely eliminate the smuggling but does make it riskier and less frequent than it would otherwise be without the yaks. 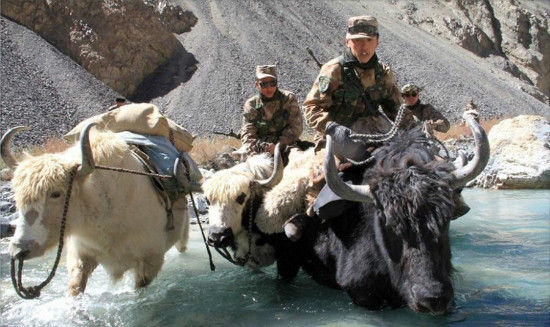 
This use of yaks is not unusual because yaks are the only breed of cattle with long hair and adapted to living at high altitudes in Tibet, Xinjiang and adjacent highlands. Domesticated male yaks weigh about half a ton, about half what wild yaks weigh, and have long been used for carrying cargo, or riders. While not as fast as a horse yaks are more surefooted in ice, snow and rocky areas. Soldiers have been riding yaks in this area for over a thousand years, mainly to control smuggling.


There's more at the link.  It's a very interesting article.  I wonder if modern animal-riding soldiers ever think about the immense weight of history that's behind their means of transport?

(Of course, that applies in many areas.  Take organized crime, for instance.  Is there a reason why Japanese criminal gangs are known as yak-uza?)

It is interesting how the bridle is just reins attached to a nose ring, it appears.

I wonder how the yaks would do if someone unleashed a half dozen large, aggressive dogs after them!

"Yakuza" is a Japanese pun. It comes from a term in Japanese gambling meaning a worthless dice throw.

The US Military actively searched for private contractors to provide training in 'mule skinning' after 9-11. Mule Skinners being a term used for mule handlers.

We still need animals. Horses and mules still can go places that no machine can go. Well, until Boston Dynamic gets involved.

10th Mountain needs to bring back the mule teams.

Dare I make a comment about the "Royal Canadian Kilted Yaksmen"? I'll go quietly to the bunker now. :-)