At 90, he lost his life's work to rioters. Undaunted, he's starting over.


My friend, photographer Oleg Volk, alerted me to a tragedy that struck artist Ari Munzer in Minneapolis during the riots there last week.  Oleg says, "Back in 1996-97, he was my college advisor, one of two people who saved my educational career. He and I have been friends ever since."

Wearing circular spectacles and suspenders that held up his loose trousers on his bony frame, 90-year-old artist Aribert Munzner stood outside his studio at the Ivy Arts Building in Minneapolis, watching friends, colleagues, former students and strangers carry out paint supplies and soggy cardboard boxes. 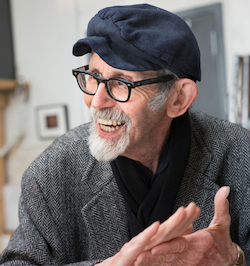 The boxes contained more than 60 years of work, damaged in a single night.

In the early hours of May 29, the roof of the Ivy — a 120-year-old building on S. 27th Avenue that once fabricated ornamental iron and now is home to more than 70 artist studios and small businesses — was ignited by sparks from the nearby Hexagon Bar, set ablaze in riots after the death of George Floyd.

Munzner, who goes by "Ari," explained the incident as if it were a scene from a comic book:

"One: Fire torch. Two: Big fire, spark, 150-year-old roof, wooden. Big fire. Fire people come, put out the fire. Big hole in roof. 1,000 gallons of beautiful Mississippi water came thundering down and I was at ground zero," he said, with an accent that sounded like a mix of New York, German and Irish.

Munzner is grappling with the loss of his many artworks, but his outlook on change is more fluid.

"I'm starting again because that's what I've been doing all my life," he said.

He was only 7 when his Jewish family fled Hitler's Germany in 1937 for Baghdad, where they had a family friend. In their new home, he learned Arabic from a Lebanese Jesuit priest. But when British forces invaded Iraq in 1941 to depose its Nazi-leaning regime, the family took off again, this time to New York City.

Munzner has eidetic memory, also known as photographic memory — "I don't have the ability to play with words — they jump like squirrels," he joked — so when he came to America he taught himself English by reading comic books.

"I learned how to say 'WOW' and 'BANG!' " he said, making explosive motions with his hands. "Superman and Captain Marvel told me how to be an American."

He came to the Minneapolis College of Art and Design in 1955 for a short-term gig. Now he is an MCAD professor emeritus.

Here's a video about Ari's work, recorded last year in his now-destroyed studio.

Ari's daughter Tamara has started a fundraiser to help her father recover what he can and rebuild his studio.  She writes:

Although money cannot replace any of the finished work or work in progress that was completely destroyed, money can help with the significant costs of damage remediation, replacing materials and tools, and moving into a new space.

Ari is still assessing the full extent of the water and smoke damage.

It's already clear that as part of the damage remediation, many of the finished works will need to be reframed and rematted. The costs of that will be high, his initial estimate is $10K-$20K for that alone.

Many supplies and materials were completely destroyed, as were some of his tools and equipment. The replacement costs could be up to $5K-$10K.

There will be costs associated with temporary storage,  moving, and setting up a new studio space. It will be difficult to find suitable space that is as affordable as his previous studio, where he was a longtime tenant with favorable terms.

All funds raised will go directly to him to be used to defray the costs of damage remediation, and of establishing a new studio space. Any amount from you is welcome at any time.

Ari's Work
Another way to support Ari, as always, is through acquiring his work. His web site, http://www.aribertmunzner.com/, documents much of his lifetime output, and includes a list of all currently available major and minor work. We will be updating those pages over the coming weeks and months as the damage assessment and remediation process unfolds; in the meantime, please do contact him to ask about any specific works that interest you.

Because Ari is Oleg's friend, and I'd trust Oleg with my life if necessary, I'm motivated to donate in his support.  I'm even more motivated by my admiration for a man of 90 years of age who's prepared to "suck it up" and face the challenge of starting over.  I hope I could be as courageous and optimistic if that happened to me so late in life - but I doubt it.  The man's a marvel.

I'd like to invite readers who feel sympathy for the victims of the riots, to join me in supporting Ari.  Let's help to salvage at least some good out of the evil that was done in Minneapolis last week.


Fellow author John Sanford has written a (couple actually) series of novels for literal decades now that are largely centered around Minneapolis, MN. I have long wondered who might have been his inspiration for a particular character - Kidd - appearing in those books. At your inspiration, I have just taken the opportunity to inquire of Mr. Munzner if he might be acquainted with John Camp, the IRL name of author John Sanford (who now lives in New Mexico, I believe) as part of inquiring how to purchase one of his minor works (he didn't mention any guns :)).

Thanks for the tip.